Putting Together a Scene in TRUMBO

Early in TRUMBO, a glamorous party in 1947 sets the tone for the world in which film takes place. Not only does the glitzy event showcase the A-list crowd with whom Trumbo (Bryan Cranston) rubbed shoulders, it introduces us to the complex behind-the-scenes social network that makes Hollywood run. The elegant party is in full swing around the pool of director Sam Wood (John Getz), a man with whom Trumbo had worked with on one of his biggest hits, Kitty Foyle, but now is fighting with over politics. As Trumbo’s wife, Cleo (Diane Lane), and his friend Edward G. Robinson (Michael Stuhlbarg) try to damper the scuffle, Hedda Hopper (Helen Mirren) and John Wayne (David James Elliott) look on with interest. In this scene, the filmmakers introduce the audience to Trumbo’s world and sketch out the alliances and conflicts that will develop as the story unfolds. We spoke with the various artists––production designer Mark Ricker, cinematographer Jim Denault, costume designer Daniel Orlandi, and editor Alan Baumgarten––about how they worked together to make this scene work. 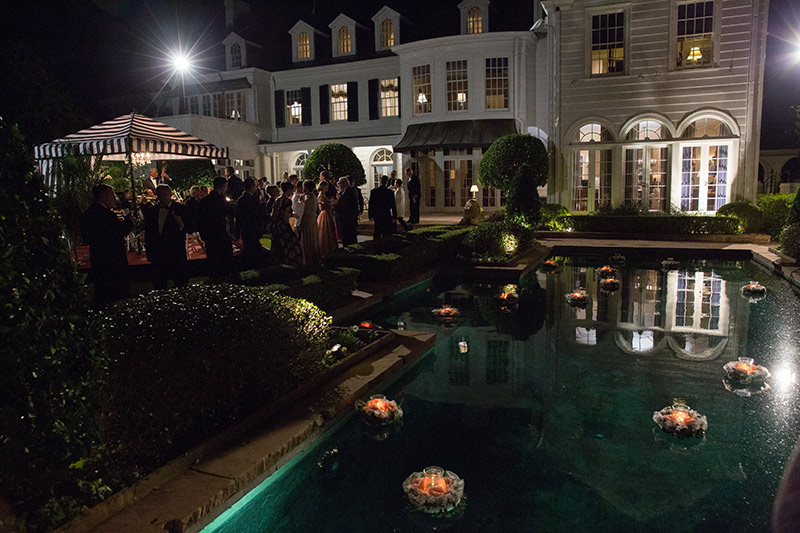 Since the film was shot in New Orleans, the first task was to find a location that could both double for late 40s Hollywood and signify an air of prestige necessary to make the scene work. For production designer Ricker, the party needed “to present the level of success that Trumbo achieved in Hollywood. He moves comfortably through this social exercise and holds his own against the rich, famous, and powerful.” Having studied the homes of George Cukor, D.W. Griffith, Mary Pickford, and Douglas Fairbanks, among others, for reference, Ricker initially feared he might not find an estate equal to the job in New Orleans. But, as he explains, “We were fortunate to find great locations for our ‘Old Hollywood’ look, this house being one of them. It was a classic East Coast Colonial, with scope, multiple lawns, mansard tin awnings, and a POOL! Typical of a style of house that would have been built in the 1920’s in Bel Air or Beverly Hills.”

Except for having to cover up some modern elements, like a Jacuzzi, the filmmakers needed only to dress the pool area to stand in for a Hollywood party. In addition to adding “topiary, curtains, statuary, period pool furniture and all the trappings,” Ricker and team had to construct a bandstand appropriate for the period. “We replicated the classic big band look in the ‘pennants’ that hang off the music stands,” details Ricker. “We also went for a classic black-and-white stripe in the tent that I’d seen in cabanas, awnings, pool tents, etc. from the period.” 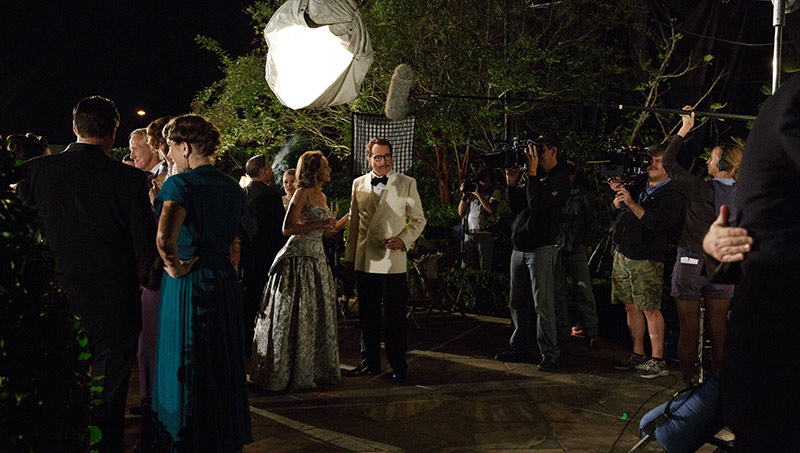 Since the production was forbidden from setting up equipment outside of the property line, Ricker and his team helped illuminate the scene by providing as many practical lights as possible. “I also ran through the house personally and turned on every lamp possible,” remembers Ricker, “just to ensure that not a single window was left dark; I wanted the house to glow.” 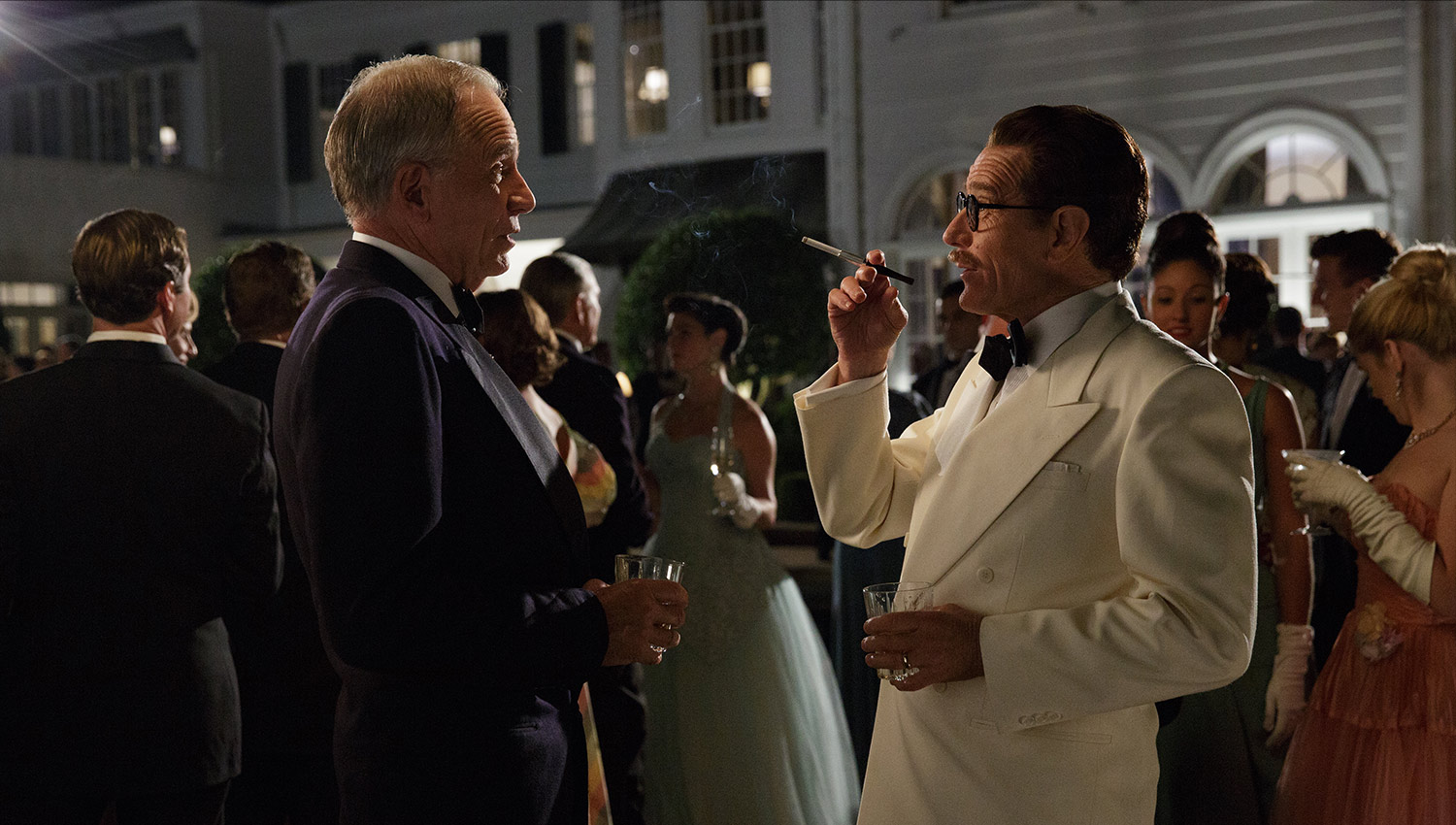 To shoot the scene, cinematographer Jim Denault overcame the challenges of the location to create a look reminiscent of classic Hollywood: “We were very restricted about what we could place on the property, and forbidden to put equipment on any of the surrounding properties.” To illuminate the scene, Denault had to “place some backlights behind a hedge hiding the tennis court (opposite the pool) and on tall stands near the house.” With this minimal lighting, Denault crafted a specific look: “I was after a glamorous Hollywood kind of feel, evoking a bit of ‘Golden Age’ lighting, while trying not to make it feel old fashioned.” Keeping with the period’s aesthetic, Denault made sure that “the women are lit for beauty lighting, rather than a contemporary kind of naturalism.” But more than just a glamour showcase, the scene needed to clearly highlight the drama. “The main goal was about visibility (clearly seeing the actors we are being introduced to) with an opulent sort of mood,” notes Denault.

To show off that opulence, costume designer Daniel Orlandi created a range of looks that both highlighted the primary characters and drew out the inherent drama of the scene. “The costumes were designed to show the Hollywood highlife,” explains Orlandi. “Women dressed in a mixture of late 1940s glamour and Dior’s radical ‘New Look’ style gowns. We used beautiful pale pastel, Jordan-almond colors, large corsages, and glamorous jewelry. We dressed the men in formal 1940s tuxes and boutonnieres.” 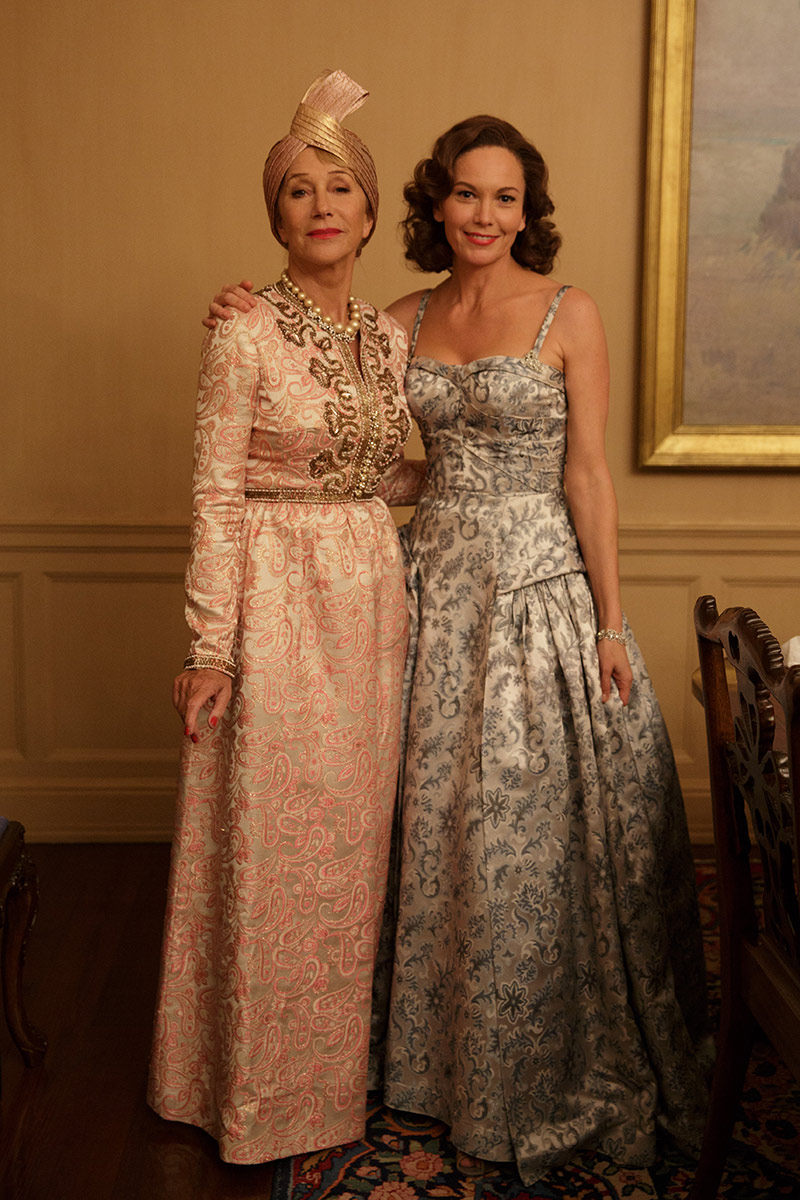 While overall the costumes set the bar for glamour, individually they were tailored to illustrate the various characters’ nature. In dressing Helen Mirren as Hedda Hopper, Orlandi emphasized her love of the ostentatious. “Hedda’s 1940s Schiaparelli-inspired brocade gown and evening turban introduces her and her eccentric flamboyant style and love of hats,” explains Orlandi. “The exotic gold turban was made from vintage 1930s gold metallic fabric. The embroidered gown features 1940s shoulder pads and is accented with bold jewelry.” On the other hand, in dressing Diane Lane as Cleo Trumbo, Orlandi emphasizes her taste and fashion sense. “I designed Cleo’s gown to be a more fashion-forward, Dior-inspired ‘new look’ silhouette in a pale blue silk brocade to set off her eyes and youth,” notes Orlandi. “The full skirted gown had boning and a many layered organza petticoat to achieve the period style and shape.” Capitalizing on Trumbo’s reputation as “a stylish bon vivant with an eccentric style of his own,” Orlandi says he “wanted to show Dalton Trumbo at the top of his game by having him stand out in a impeccably tailored white dinner jacket.”

The same level of detail that went into dressing the lead actors went into orchestrating the costumes for the extras. From an overall design point of view, their look needed to allow “all our principal actors to ‘pop’ a bit,” explains Orlandi. “We kept all the men in black to keep the focus on Dalton in his white silk jacket and John Wayne dressed in midnight blue. The women were dressed in the pale colors avoiding Cleo’s and Hedda’s colors.” But the extras were not just dressed to create a glamorous backdrop; each served as an integral piece in the Hollywood mosaic Orlandi was constructing. “A lot of time and care was taken in the tailoring of each and every extra in the scene,” explains Orlandi. “I dressed each extra as a character: movie stars, starlets, writers, producers, wives, etc.” 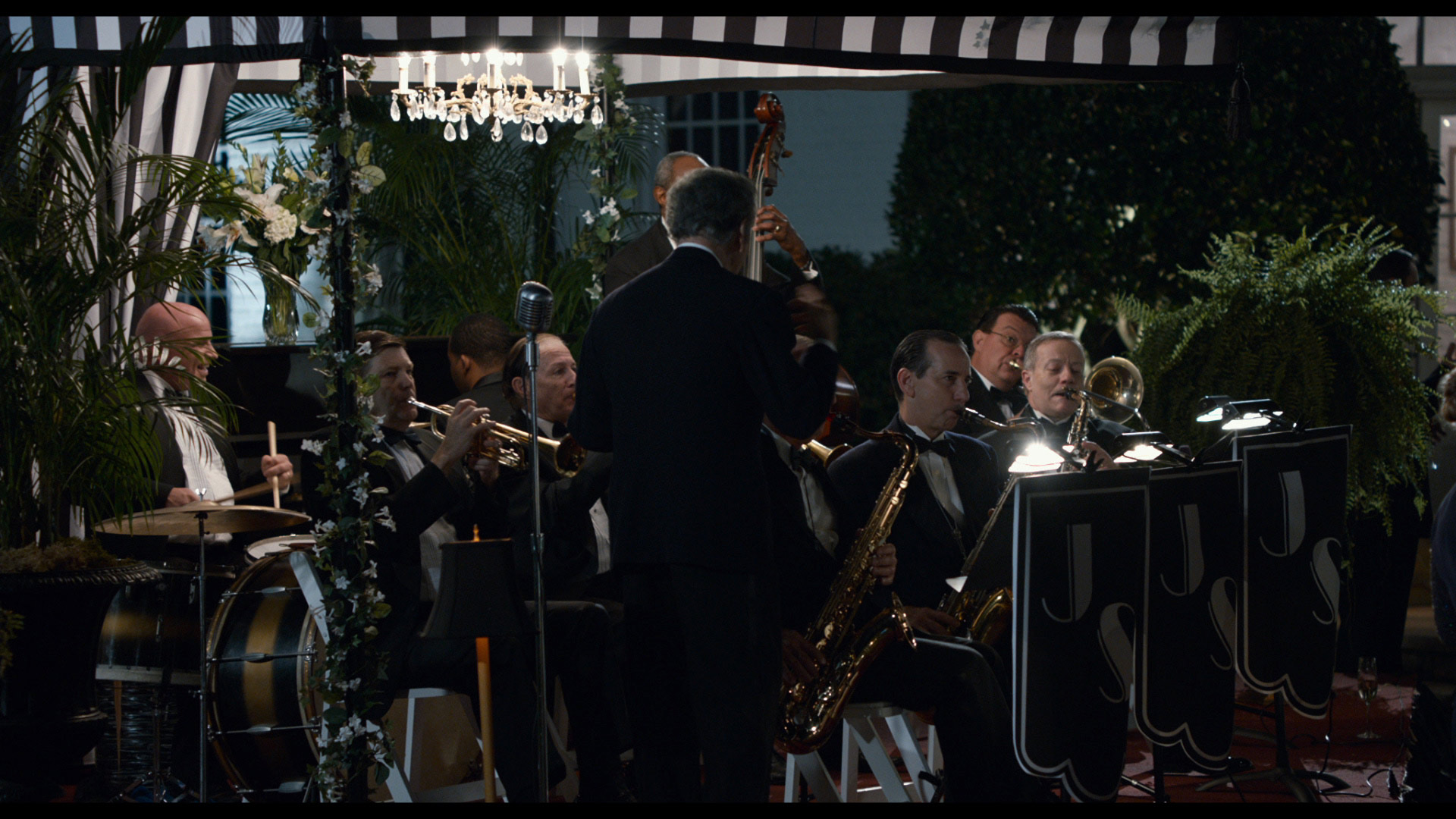 Since every great party is fueled by the music, picking the right song was editor Alan Baumgarten’s starting point. “The song we used (“Saratoga Special”) was chosen during pre-production,” notes Baumgarten. “I asked Steven Baker, a music supervisor I’ve worked with before and who ended up working with us on this film, to offer up some suggestions.” After a review of different period music, director Jay Roach picked “Saratoga Special” to get the party started.

In cutting it together, Baumgarten wanted this scene not only to introduce many of the film’s principal characters, but also to highlight relations and tensions that would be explored later in the film. “The argument is at the center of the scene and we start with Trumbo and Wood going at it,” highlights Baumgarten. “After this we move on to introduce all of the other characters, first observing and then reacting to the argument––Edward G. Robinson, Cleo Trumbo, John Wayne, Hedda Hopper, and a photojournalist.” While the argument provides the scene’s action, a complicated network of alliances, tensions, and even hostilities is silently introduced by the eye-line communications suggested by the scene’s editing. “The glances and looks between characters were a very important part of constructing this scene,” explains Baumgarten. Beginning with Hedda’s point-of-view of the fight, the scene moves to a knowing look at John Wayne and then back to the fight, and continues stitching up all the characters into the scene by their glances and reactions. “This scene is heavily built upon overt and covert looks between characters,” notes Baumgarten. “It’s always good to remember how much of what’s important is communicated in the eyes, so it’s great fun when the looks between characters are such a big part of a scene.”