The women who put McQueen on the runway

In McQueen, filmmakers Ian Bonhôte and Peter Ettedgui use the designer's dramatic fashion shows to trace the trajectory of his creative journey. Vulture's Emily Yoshida points out how the film reminds us that "fashion is an incredibly emotional art form, and McQueen's work was some of the most moving there was or ever will be." His models became his collaborators, acting out the complex dramas he set in play for each show. We highlight six of his most famous models and their feelings about McQueen's genius.

For Erin O'Connor, Alexander McQueen's 2001 show "Voss" is "probably the most exciting show I've ever done, in my career." Along with such models as Kate Moss and Jade Parfitt, O'Connor became one of the inmates of McQueen's asylum that night. On stage, the model walked through a room with white padded cells and mirrored walls that allowed the audience to see the models, but the models couldn't see the audience. To push the asylum theme, McQueen told his models before the show, "I need you to go mental." On the catwalk, O'Connor showed off two stunning outfits. One was a red dress with a bodice composed of blood-colored, hand-painted microscope slides that gave way to dyed ostrich feathers below. The other was a gown composed of cascading razor clam shells that McQueen had gathered himself at the beach. When O'Connor walked out, McQueen singled her out, telling her to go wild and tear her dress off. When she started ripping the shells off, the dramatic effect was staggering. For O'Connor, there was something special about working with McQueen: "Those shows were real emotion; there was nothing gimmicky about it. "

Ballet dancer-turned-model Shalom Harlow made history with Alexander McQueen during the culmination of his 1999 show "No. 13." Presented in a warehouse on an untreated wooden runway, the show initially touched on the Arts and Crafts Movement's promotion of the man-made over the machine-wrought. At the end, the fight between man and machine became personal. Harlow took the stage in a simple, stark white dress of layers of tulle that was then spray painted by the robots. As she rotated on her platform, the robots grew more savage and violent. Harlow recalls "when they were finished, they sort of receded and I walked, almost staggered, up to the audience and splayed myself in front of them with complete abandon and surrender." The simple image of a woman in a white dress being attacked by machines would become one of the most arresting spectacles of modern fashion.

Asked what the best thing a designer has ever told her, model Jade Parfitt replied: "When Alexander McQueen just asked me to 'freak out' on the runway for his legendary Voss Show." Parfitt was dressed in one of the show's most dramatic outfits, a homage to the designer's love of birds. Wearing a thickly feathered skirt, Parfitt walked the runway in a headdress of three taxidermied hawks appearing to claw at her. Parfitt, who modeled for McQueen over his career, joked that in the early shows, "You'd do it for £100 with one eye blind and in five-inch heels; you really had to earn that £100!"

Kate Moss | "The Widows of Culloden"

McQueen's fierce dedication to Kate Moss highlights his connection and commitment to his models. In 2005, when the supermodel was dropped by several fashion lines after photos of her doing cocaine appeared in the tabloid press, McQueen stood by her by wearing a shirt bearing the words "We Love You Kate" on the runway, telling the audience, "She's done more for London fashion than anyone else." To pay homage to the beleaguered model, McQueen projected a holographic apparition of Moss as a coda to 2006 show "The Widows of Culloden." The spectral image of Moss rotating in a fluttering outfit of cascading white organza ruffles on stage proved emotionally devastating for everyone present. While its ethereal beauty paid tribute to Moss's own luminous magic as a model, its ghostly nature reminded all of the model's absence from the runway that season, a loss suffered most by Moss herself. The piece proved so powerful that it was recreated for the "Savage Beauty" exhibition at New York's Metropolitan Museum of Art and again when "Savage Beauty" was restaged at London's Victoria and Albert Museum.

Magdalena Frackowiak has been front and center in many of McQueen's most memorable shows. In his 2009 show "Horn of Plenty," Frackowiak played the notorious black swan wearing a puffed-up, black-feathered gown and made up with huge red lips. Frackowiak opened McQueen's last show "Plato's Atlantis" in a glimmering iridescent digitally printed design and hoofed armadillo boots. After McQueen's death, Frackowiak was still touched by having been a part of these shows. "When I went to the McQueen exhibition and I saw my dress," Frackowiak relates, "I had tears in my eyes, you know? Because you realize you are part of this incredible process." 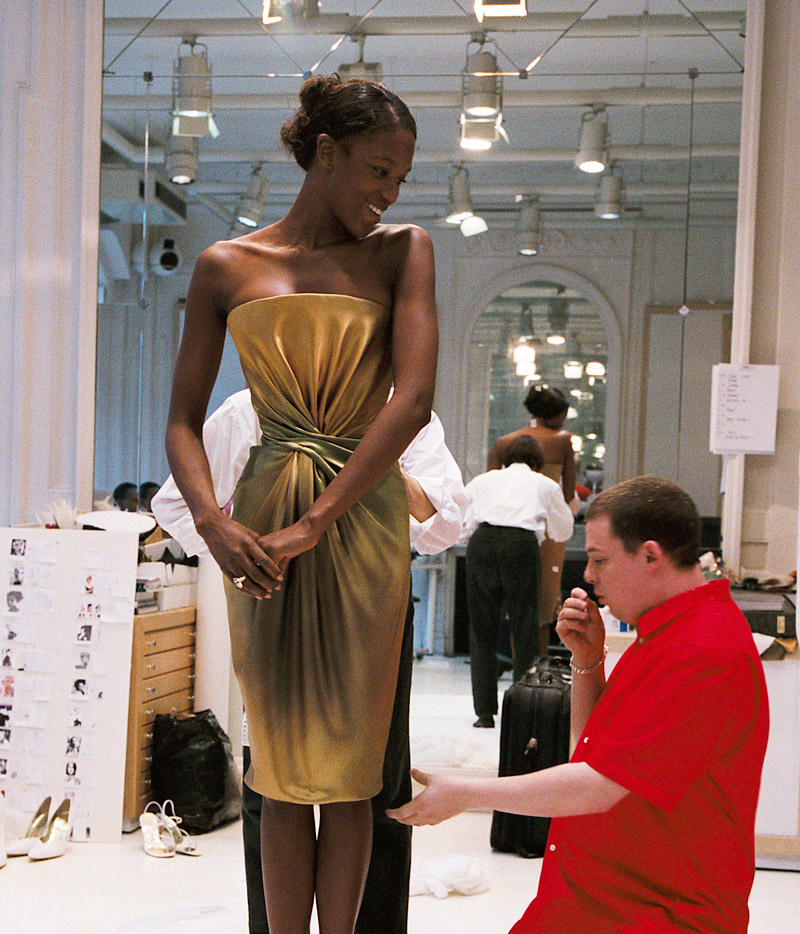 In 2017, supermodel Naomi Campbell posted a photo on her Instagram account showing her with the late Alexander McQueen. The caption read: "#our beloved #Lee , how much do I miss your don't f**k with me attitude , while underneath most gentle soul and biggest heart." Campbell became close friends with McQueen after working with him very early in his career. At his Spring/Summer 1997 Givenchy Haute Couture show, Naomi set the tone, wearing a stunning gold gown topped with golden ram's horns.