The Long-range Weapons of the Near Future

Sci-fi weapons that are actually being used right now

The Long-range Weapons of the Near Future

EYE IN THE SKY's Futuristic Hardware

In Gavin Hood’s EYE IN THE SKY, UK Colonel Katherine Powell (Helen Mirren) launches a program of aerial surveillance on possible terrorists in Kenya with the help of a US drone pilot (Aaron Paul) operating out of Nevada. When the observe-and-capture plan turns into something more complex, Powel with the help of a team of Kenyan operatives, including Jama Farah (Barkhad Abdi), mobilizes both high-flying aerial Reaper drones and smaller micro aerial vehicles (MAVs) to help unravel a probable terrorist attack. In addition to revealing the intricate mechanism of military decision making, EYE IN THE SKY puts on display some of the latest advances in military hardware, weapons and instruments that seem to belong more to the realm of science fiction than the Department of Defense. These technological advances are part of a range of futuristic weapons either currently in deployment or on the horizon. To give a fuller sense of how far modern warfare has come, we survey a range of weapons and military technology that in recent years has moved from the category of science fiction to pending deployment. 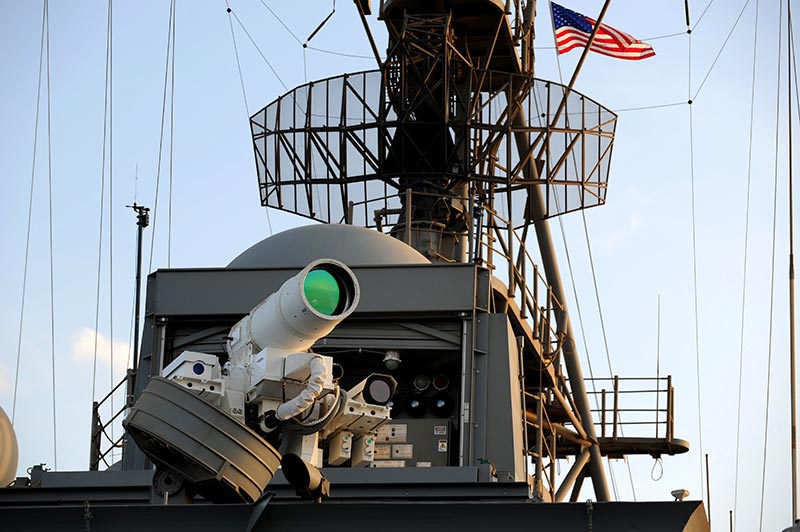 In his 1898 novel The War of the Worlds, H.G. Wells introduced a strange and terrifying new weapon, which the Martians use to subjugate Earthlings. “In a moment the Heat-Ray was brought to bear, and the town became a heap of fiery ruins,” Wells wrote about the weapon’s capabilities. This fictional weapon, which focused high-intensity energy to wreck havoc, soon found various scientists imagining its real possibility. In the 1930s, Nikola Tesla claimed to have invented the Teleforce, a weapon that by concentrating energy into a single death beam could "destroy anything approaching within 200 miles.” For the most part, such speculations were relegated to dime-store fantasy novels and lurid comic books. But in 1958, the science behind such a concept got a name when a Columbia University doctoral student coined the term LASER for Light Amplification by Stimulated Emission of Radiation. Two years later, Theodore Maiman of Hughes Research Laboratories in Malibu created the first functional laser. The military quickly fixated on how such a tool might be used as a weapon. In order to defend the US against ICBM launches, laser technology figured heavily in Ronald Reagan’s 1983 proposed Strategic Defense Initiative (SDI). But idea and implementation were still 30 years apart. By 2010, Raytheon Missile Systems showcased a laser mounted on a ship that took out four drones. Since then defense contractors have been rushing to bring out better and more powerful lasers. While the first prototypes had a 10-kw output, enough to knock drones out of the sky or hit ships, newer prototypes can use up to 30 kw, and Lockheed Martin recently acknowledged they had plans to push that number up to 60 kw. While the research and development is expensive, the military is banking on saving money in the long run. In Nature, David DeYoung, Boeing's director of directed-energy systems, explained the upside of laser economics: “An inexpensive missile is $100,000 and that's one shot…To shoot a laser-weapon system once is less than $10.”

Navy tests of an electromagnetic railgun

During World War II, a German scientist, Joachim Hänsler, designed a electromagnetic projectile launcher that could be used as an anti-aircraft weapon. Unfortunately, while the invention looked great on paper, it proved impossible to implement. In 1947, American scientists who’d gotten their hands on Hänsler’s plans calculated that each gun would need power equal to lighting half of Chicago to work. A railgun, which uses electromagnetic forces to accelerate a projectile down parallel rails, required a level of energy that for decades made the weapon no more than a sci-fi trope. Acutely aware of the benefits presented by a railgun, military researchers continued to push for it. By using electomagneitc force, rather than chemical propellants, railguns could hurl projectiles at speeds and over distances unheard of by traditional weaponry. Even as the technology advanced to make railguns a reality, scientists were faced with the secondary challenge of fabricating projectiles of a material that could withstand the pressure of being thrown at such high speeds. By 2005, the US Office of Naval Research was ready to make science fiction real when they ponied up over $250 million to develop a working railgun. After 10 years, the Navy unveiled a working demo, a railgun that can fire a projectile at seven times the speed of sound (or Mach 7) at targets over 100 miles away. (In comparison, traditional missiles, like a Hellfire, can only reach the speed of Mach 1.) In 2016, the Navy plans to begin testing the weapon on ships with real-world conditions.

Previously the idea of a bullet following its target wherever it moved was the stuff of cartoons or Michael Crichton’s 1984 futuristic thriller Runaway. But in 2015, the Defense Advanced Research Projects Agency (DARPA) successfully tested out theirExtreme Accuracy Tasked Ordnance (EXACTO), a weapon with bullets that can change direction midflight. “True to DARPA’s mission, EXACTO has demonstrated what was once thought impossible: the continuous guidance of a small-caliber bullet to target,” said Jerome Dunn, the program’s manager. While the exact mechanics of the artillery are classified, the EXACTO bullets incorporate a laser and guidance system to keep the bullet on target. In addition to making the bullets smart, the military is changing both the nature of guns and how bullets are delivered. In 2004, Lt. Col. Amos Golan of the Israeli Defense Forces developed the CornerShot, an assault weapon that swivels in the center to allow a shooter to fire around corners. In development is the DREAD silent Weapon System, which was patented in 2003. A mountable circular weapon, the DREAD is a machine gun that uses centrifugal force, rather than gunpowder, to propel bullets. When operational it is predicted that DREAD will be able to fire up to 120,000 rounds per minute without any sound or heat. 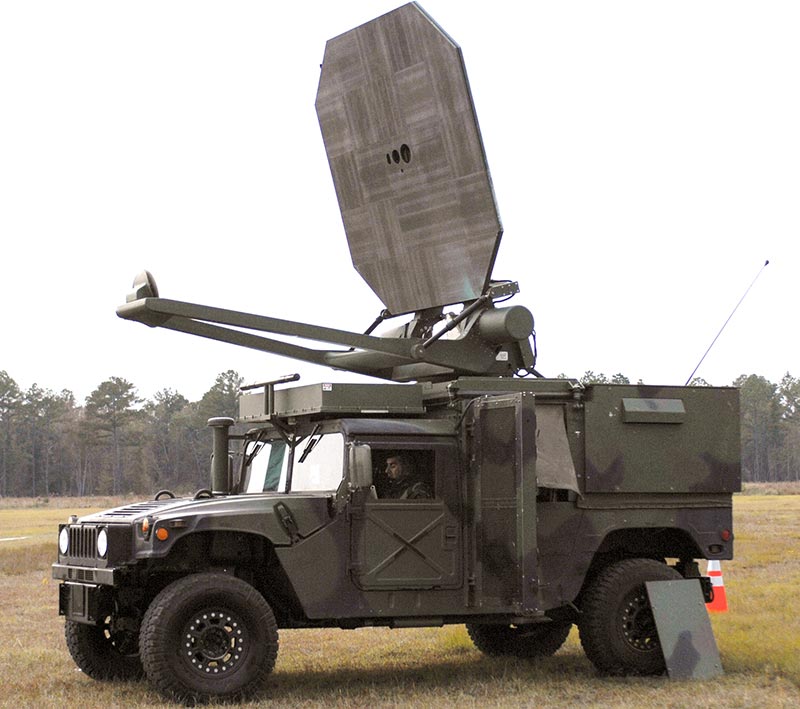 For decades, futuristic writers imagined a technology that would allow governments to control their populations through mind control. While such fantasies often involved a radio frequency that would turn citizens into mindless drones, the recently launched Advanced Denial System (ADS) provides a less colorful, but no less persuasive version. Classified as a non-lethal weapon, the ADS directs high doses of microwave radiation to inflict a sensation of tremendous pain in order to motivate human targets. Creating a sensation that goes from uncomfortable to unbearable within 5 seconds, ADS seeks to create what its developers call the “goodbye effect,” that is, inducing "prompt and highly motivated escape behavior." Having already been tested on hundreds of test subjects, the ADS was deployed in Afghanistan in 2010, but never actually used. While many hoped this could be the key to controlling crowds in hostile foreign situations, the Department of Defense explained its lack of deployment by simply stating, “The decision to recall the weapons back to the US was made by commanders on the ground in Afghanistan." The Ratheon company has also created a smaller ADS called the Silent Guardian to be used by police and other law enforcement groups for domestic crowd control. Recently an adapted version of the Silent Guardian was installed in the LA County jail, but before it was ever turned on, Los Angeles County had it removed for fear that its use could be construed as torture. 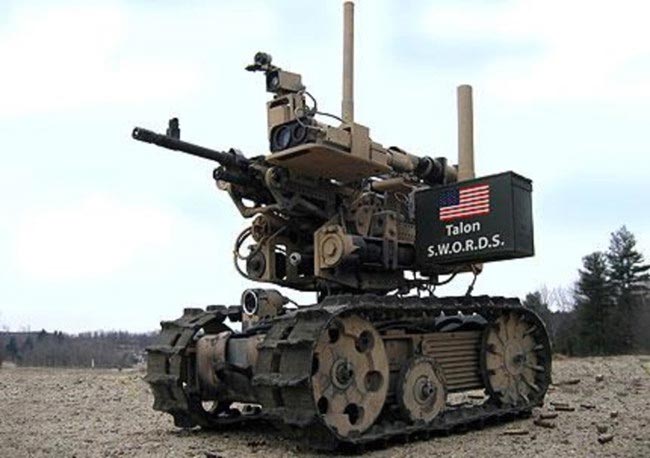 While no contraptions that look like The Terminator’s cyborg or Marvel’s Ultron are jumping off defense contractor’s drawing boards anytime soon, robot soldiers are nevertheless becoming a reality. The US Army has already created the Special Weapons Observation Reconnaissance Detection System (SWORDS), a weaponized robot that can be remotely controlled by a soldier. In 2007, three SWORDS were deployed to Iraq, but never actually used. In South Korea, the army with the help of Samsung’s technology developed SGR-A1, robot sentry that can guard borders. In addition to having sensory devices that can accept (or reject) spoken passwords, the SGR-A1 is armed with a machine gun to fire on unwanted intruders. While no one has yet created a machine with enough artificial intelligence to take off to a battlefield on its own, the specter of killer robots haunts the near future to such an extent that a number of groups are calling for political action against them. In 2012, Human Rights Watch issued a position paper entitled “Losing Humanity: The Case Against Killer Robots” which urged that “a preemptive prohibition on their development and use is needed.” That same year, the Campaign to Stop Killer Robots, a coalition of groups concerned about their inevitability, was founded to promote education and advocacy on the issue. In 2015 the United Nations Institute for Disarmament Research (UNIDIR) set up a special meeting to discuss concerns about cyber and autonomous weapons with some members calling for a ban on “killer robots.” As far as we know, no robots from the future returned to attend that conference. 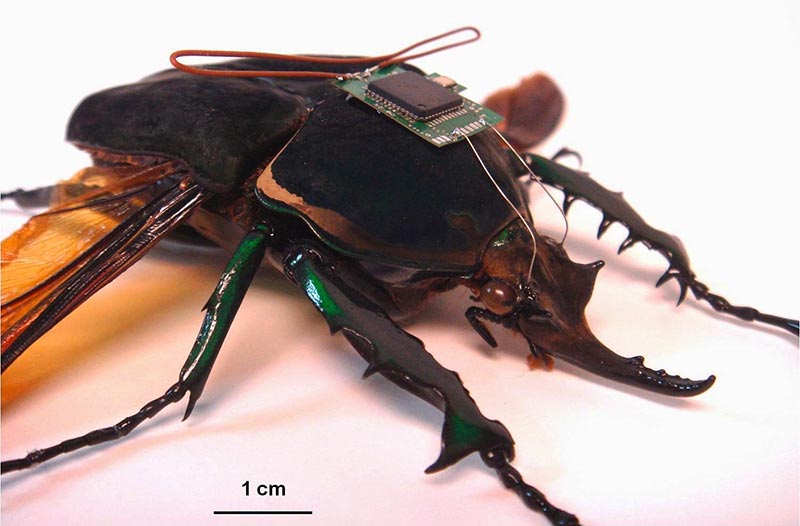 EYE IN THE SKY showcases how some micro aerial vehicles (MAVs) are often disguised as recognizable creatures, like birds or insects, to escape detection. The idea of recruiting animals as our allies is not new. In Frankenstein's Cat: Cuddling Up To Biotech's Brave New Beasts, Emily Anthes recounts a tragic early attempt by the CIA to transform our pets into secret agents. After wiring a cat with sound and recording devices, the CIA pushed the feline out the door to spy on a pair of foreign officials sitting on a bench nearby. Unfortunately, as Anthes recounts, “the cat wandered into the street, where it was promptly squashed by a taxi.” Some 50 years later DARPA revived the dead cat (metaphorically) by asking scientist to submit "innovative proposals to develop technology to create insect-cyborgs." Inspired by the drone hummingbird and fly models, DARPA thought, "it might be possible to transform [insects] into predictable devices that can be used for…missions requiring unobtrusive entry into areas inaccessible or hostile to humans." Michel Maharbiz, an associate professor of electrical engineering and computer sciences at UC Berkeley, immediately went to working wiring up a beetle. Within a short time, he and his team had successfully flown a beetle by remote control. They have refined the process by implanting components during the insect’s pupal stage, so that when the beetle becomes an adult, the mechanical parts are fully integrated into its body. Others have begun research to see if they can power the insect’s new electronic circuitry by using the energy created by its flapping wings. While currently such technology is designed primarily for surveillance, in the future these cyborg insects, much like their MAV counterparts, could take on more aggressive tasks. EYE IN THE SKY director Gavin Hood points out that in the future MAVs might “be equipped with face recognition software for example, and sent into a crowded room to identify an individual who has been targeted for assassination. And when they recognize that individual, the MAV might simply release a small dose of anthrax, or some other poison, and leave.” Our cyborg agents might be recruited for similar diabolical missions.