Living Off The Grid

Stories of Independent Life from Off the Map to CAPTAIN FANTASTIC

Living Off The Grid

CAPTAIN FANTASTIC | Living Off The Grid

In Matt Ross’ CAPTAIN FANTASTIC, Ben Cash (Viggo Mortensen) lives with his six children completely off the grid in the mountains of the Pacific Northwest. Rather than have his children go to public schools, Cash engages his kids in a rigorous physical and intellectual curriculum, teaching them the classics as well as more practical lessons in fishing, gardening, construction, and more. In the evening with no electricity, the family discusses ideas and plays music rather than sitting in front of a TV or typing away on their smart phones. To bring this unique way of life to the screen, Ross mined his own past. “My mother was interested in alternative living situations,” Ross explains. “When I was a kid, it wasn’t called living ‘off the grid,’ but we did live in communes in Northern California and Oregon. We were in the middle of nowhere without television or most modern technology.” The original term “off the grid” referred specifically to the power grid that tied people to public utilities, and therefore to communities, corporations, and centralized planning. When Thoreau suggested in Walden that “a man is rich in proportion to the number of things which he can afford to let alone,” he was in essence defining the nature of living off the grid, a social and philosophical economy being embraced by more and more people every year. The reasons why, and the ways in which, people go off the grid, however, vary drastically. In his 2010 book Off the Grid: Inside the Movement for More Space, Less Government, and True Independence in Modern America, Nick Rosen discovered that while more and more people are packing up and heading for the hills, there is no single reason that motivates them. “The people living this way––the off-gridders––might be middle class environmentalists or right-wing survivalists, victims of foreclosure or long-term pot-growers, international business travelers with their own islands or groups of friends who decided to start a community,” Rosen explains. What connects them is a desire to live independently, like that found in CAPTAIN FANTASTIC. We explore a few of these off-the-grid trends and the films that capture their spirit.

A Family’s Journey | Off The Map 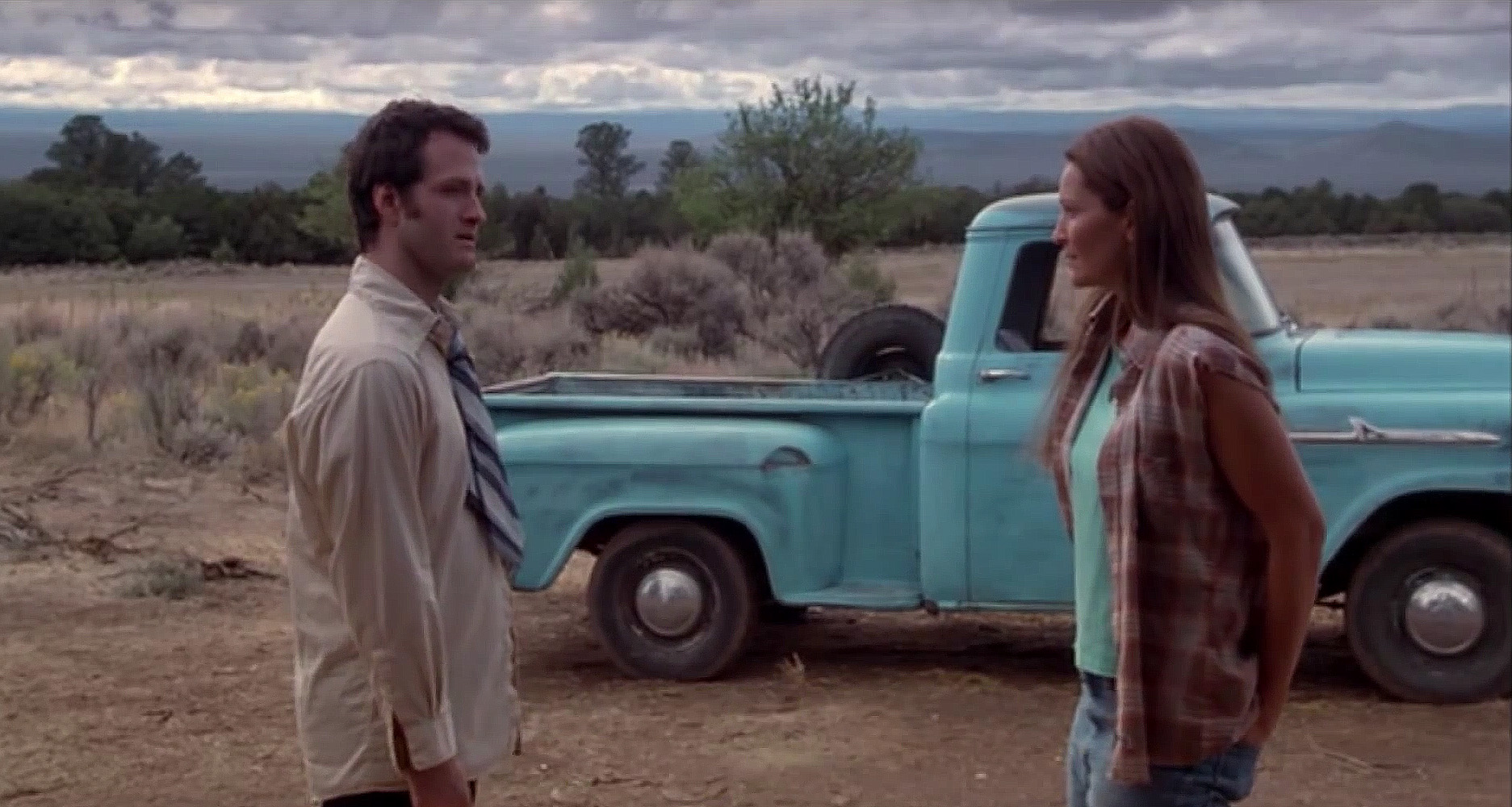 In Campbell Scott’s 2003 Off the Map, which Joan Ackermann adapted from her own play, a hapless IRS agent (Jim True-Frost) seeks out a farm in northern New Mexico where Joan Allen and Sam Elliott are raising their daughter (Valentina de Angelis) far from the constraints of traditional society. The family’s low income triggered an IRS audit, which brought the agent to this off-the-grid home. But what he finds is a truly independent household, living off the vegetables they garden and the fish they reel in, spending their free time painting and exploring the beauty of the high desert, and educating their child at home. “It's the discovery of a lifetime: a house full of unforgettable souls living without a telephone, plumbing or money,” writes The Washington Post’s Desson Thomson. “They lack for nothing. They are living, it seems, on life itself.” The family in Off The Map never articulates an ideological or religious reason for living off the gird; they simply prefer to be on their own in a natural environment. In 2006, Home Power magazine estimated that over 180,000 people in American were living off the grid. For many families, living this way seemed a healthy and saner option. In a 2013 article in Psychology Today, Brad Waters looked at how two off-the-grid households in Michigan's Upper Peninsula fared emotionally. “It keeps my brain healthy,” John Jungwirth relates. For him, having raised his two children in this way, such isolation not only provides a modicum of sanity, but ultimately makes them better citizens: “It’s nice to be alone and have time to think, but when you don’t have many people around you do relish people.” 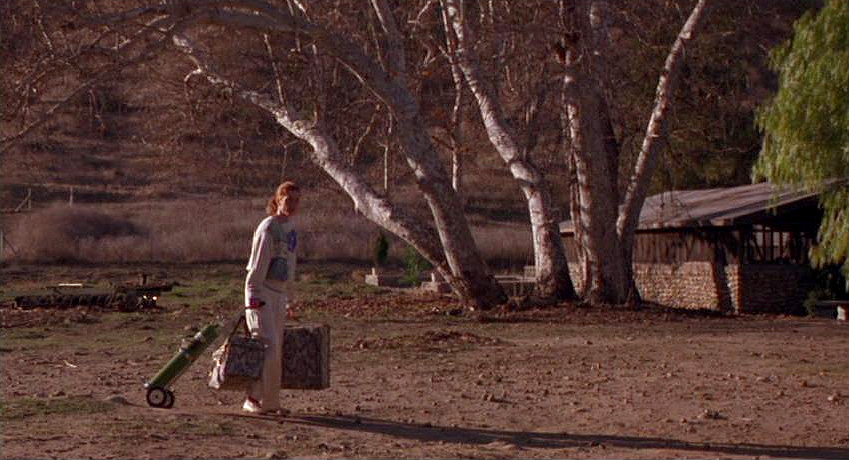 The Off the Grid News article, “5 Ways That Living Off-Grid Makes You Happier and Healthier,” points to two fundamental things fueling this new movement. “More than 40 percent of Americans say their stress levels have increased over the past five years,” Off the Grid News notes. “Stress can lead to physical symptoms like high blood pressure, chest pain, trouble sleeping, headaches and digestive disorders.” Unplugging restores vitality by providing fresh air, exercise, and naturally raised food. In CAPTAIN FANTASTIC, the Cashes not only grow or catch what they put on their plates, but also find the processed food sold in American grocery stores and diners nearly toxic. Interestingly the dream of regaining a healthy balance by living off the grid was perhaps best conjured by an eco-horror film, Todd Haynes’ 1999 Safe. In it, Carol White (Julianne Moore), a Los Angeles housewife who finds that she is literally sick of contemporary society, seeks help and shelter at an isolated New Mexican retreat called Wrenwood. There, far from the noise, pollution and chemical solvents of everyday life, White begins to address her multiple chemical sensitivity (MCS) illness. By the end of the film, however, one wonders if Wrenwood’s cures of isolation cabins and solipsistic therapies might turn out to be more harmful than the illness. For The Dissolve’s Scott Tobias, while the film doesn’t necessarily give its heroine a shelter from the storm, it allows us to empathize with her desire to unplug from the world: “She happens to obsess over the toxicity of fumes spewing from aerosol cans and exhaust pipes, but she isn’t alone in focusing her anxiety on one modern threat or another. And she also isn’t alone in seeking solutions outside the mainstream, or taking extreme measures to heal or love herself.”

Utopian Dreams | The Ballad of Jack and Rose 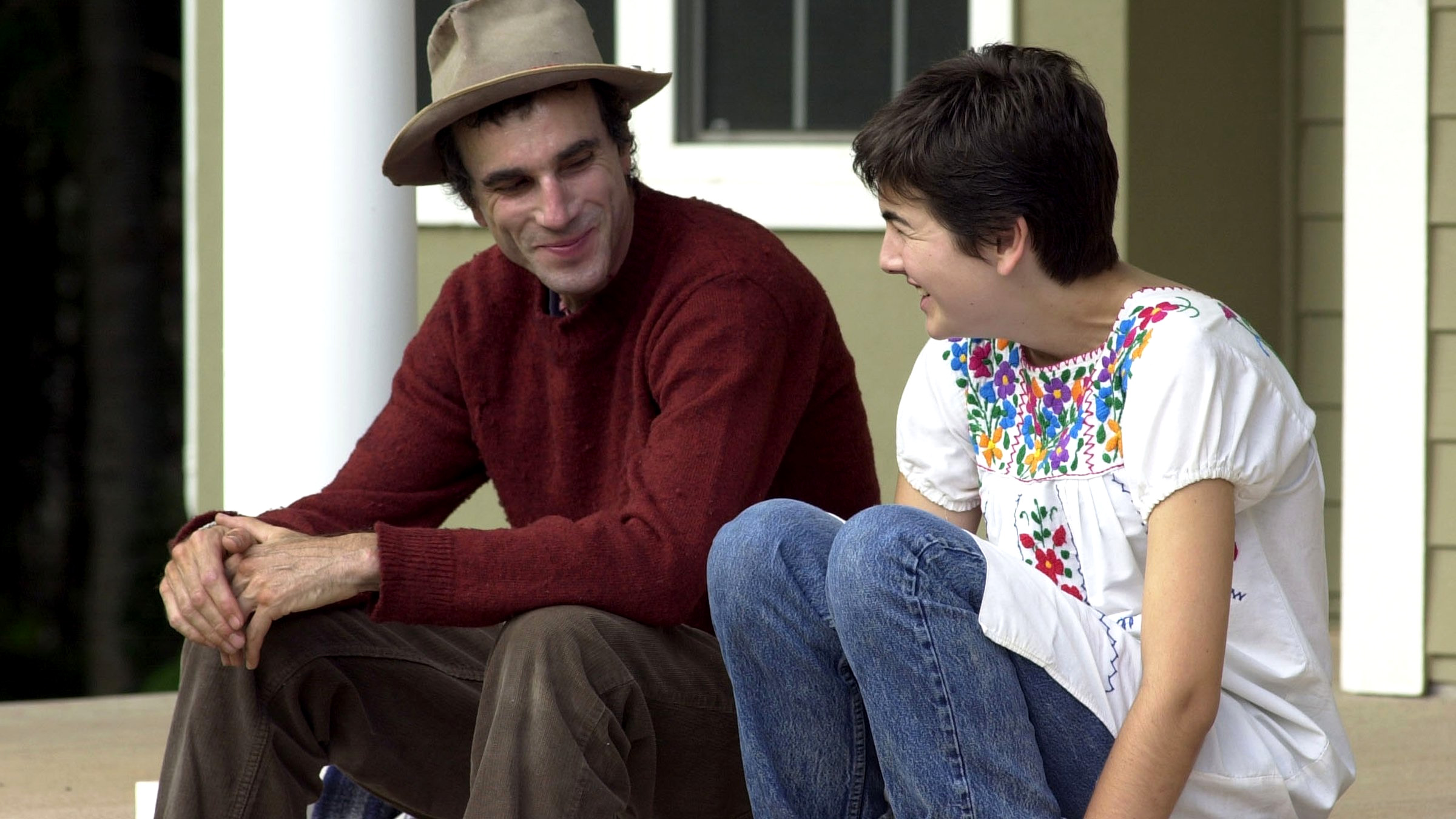 While reality pushes the off-the-grid utopia explored in CAPTAIN FANTASTIC to change over time, the dream that propels it nevertheless stays alive. The history of off-the-grid living is filled with various experiments, some that continue and some that disappear. Slab City, for example, is an off-the-grid spot that has kept its gates open for several decades. Located 140 miles east of San Diego in the dusty desert where a Marine training base used to stand, Slab City has gained the title “the last free place in America” by remaining an open city for RVers, nomads, isolationists, and squatters alike. Indeed it has become so iconic that it has been showcased in films, like Into The Wild, and parodied in Grand Theft Auto V.For other off-the-grid communities, the dream is all that remains of their grand experiments. In her article “The Ghost Commune,” posted on the website Aeon, Michelle Nijhuis narrates her family’s experience living with a group of friends in the Colorado wilderness, an experiment that ultimately failed with the dissolution of their small commune. But that doesn’t mean it was a failure. “We’re trying to take what we learned off the grid and sustain it in a new place, one that’s embedded in society instead of isolated from it,” Nijhuis concludes. In many ways, Rebecca Miller’s 2005 film The Ballad of Jack and Rose explores a family moving in the opposite direction. In the film, a father, Jack (Daniel Day-Lewis) and his daughter, Rose (Camilla Belle), are the final inhabitants of an off-the-grid island commune. With Rose growing older, Jack tries to keep the communal dream going by inviting his girlfriend (Catherine Keener) and her sons to join their isolated Eden. In the end, his idealistic efforts to keep the commune’s principles alive nearly destroy his family. “Miller doesn't romanticize Jack as a leader of lost causes; she shows why they were lost,” notes the Baltimore Sun’s Michael Sragow. “Humanity wasn't meant for utopias. Jack wasn't meant for a commune. He wants his own way too much.”

Off the Grid in the City | No Impact Man: The Documentary and Dark Days 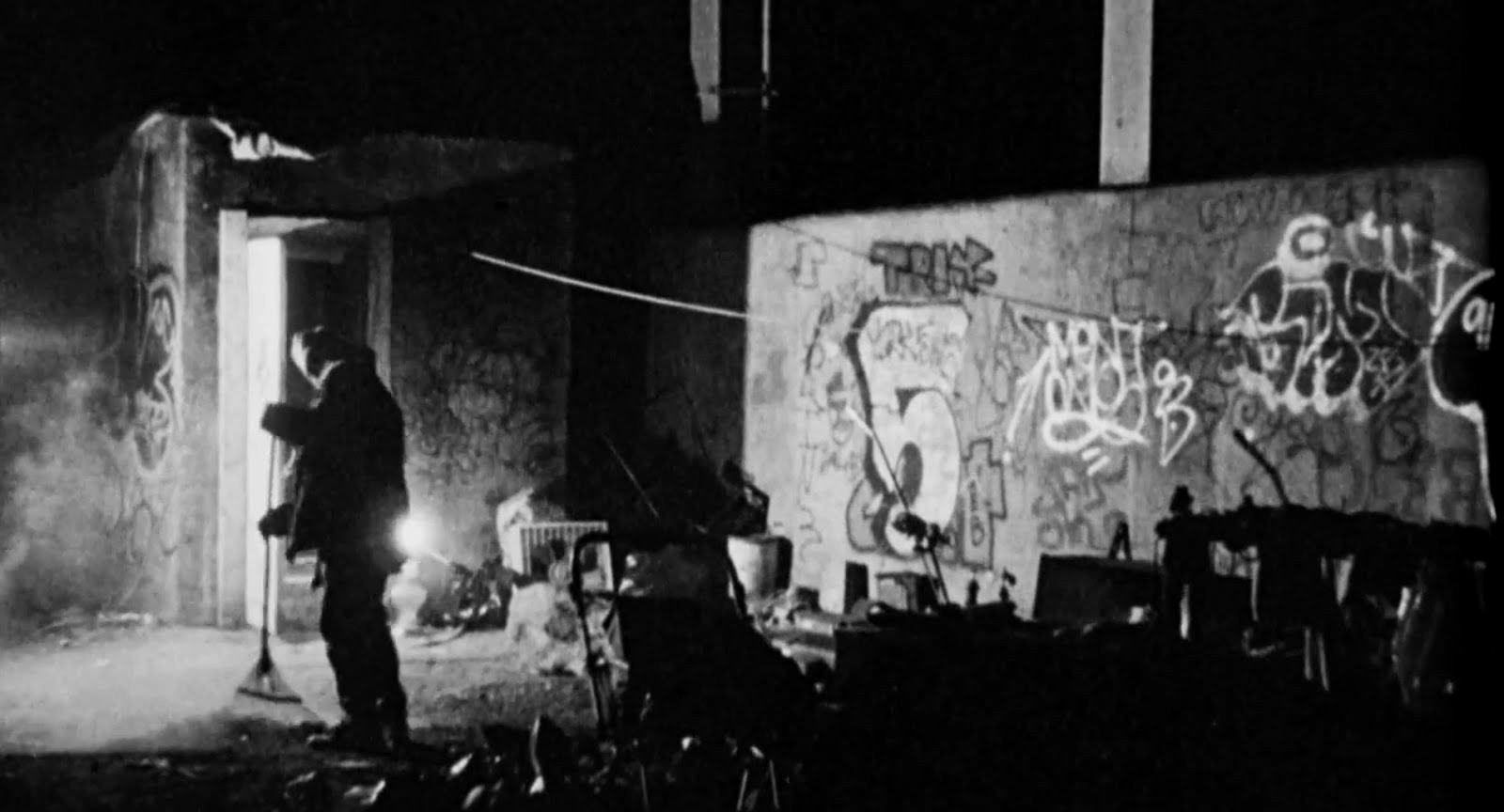 While many cinematic representations of the off-the-grid lifestyle feature hippies living in mountain communes or backwoods survivalists, not all such stories unfold in rural settings. Two documentaries reveal how people in New York City have chosen to live off-the-grid for very different reasons. Laura Gabbert and Justin Schein’s 2009 documentary No Impact Man: The Documentary chronicles the experience of Colin Beavan (who authors a book and blog of the same title). For a year, Beavan leads his not-always-willing family––his wife Michelle Conlin and their 2-year-old daughter, Isabella––on a grand and noble experiment: to live for a year making the smallest carbon footprint possible in their small Manhattan apartment. Living off the grid in the middle of one of the world’s busiest cities is a complicated affair. In addition to biking or walking everywhere, not using an elevator, and shopping seasonally and locally, the family agreed to forgo electricity. Not only is there no TV or refrigerator, but also no washing machine in which to wash their daughter’s soiled cloth diapers. Eventually Beavan installs solar panel to power up the one thing that matters most to him: the computer on which he writes his blog. By turns eco-documentary and martial melodrama, No Impact Man captures the complex reality of such good-intentioned plans. “Ultimately, it's an instructive and entertaining examination of both the overlooked environmental costs of everyday life and the possibilities for change,” The Oregonian’s Marc Mohan sums up. In a very different light, Marc Singer’s 2000 documentary Dark Days explores a version of off-the-grid living that occurred in the same city, but was nearly invisible to all. The documentary won the 2000 Sundance Film Festival’s Freedom of Expression award for uncovering a community of homeless people living in the train tracks beneath New York City. In the mid ‘90s, the English-born Singer was living in Manhattan where he first caught wind of this underground world. “When I first went down there, I was amazed and awed; I had so much respect for everybody and I kept thinking, ‘Could I have done this or would I have let myself go to pieces?” Singer told IndieWire. After visiting and living with these people for several years, Singer gained their trust enough to film their story. But hoping to avoid the alienating traps of many ethnographic films, Singer, himself a novice filmmaker, enlisted his subjects to also be his film crew for much of the production. After hours of shooting and many mistakes, Singer emerged with a finished film. “The result is an eye-opener that takes us into Singer's experience and turns our perceptions of the homeless inside out,” exclaims The San Francisco Chonicle’s Edward Guthmann. “Singer focuses on a few individuals and in doing so skewers the notion of the homeless as an undifferentiated monolith.”