Five Films on the Blacklist Before TRUMBO

Jay Roach’s TRUMBO captures the life of a fascinating Hollywood screenwriter during a turbulent period of post-war America. After Dalton Trumbo (Bryan Cranston) refused to name names before the House Un-American Activities Committee (HUAC), he was jailed and then blacklisted from writing for Hollywood studios. Nevertheless, Trumbo and other blacklisted screenwriters continued to write for years, using fronts or pseudonyms to get their work produced. Trumbo even won two Oscars for films in which his name did not originally appear in the credits. “We are portraying an incredible time in Hollywood history, both the beautiful, glamorous part of that world and the dark side, including the House Un-American Activities Committee,” explains TRUMBO producer Janice Williams, a world that was “entertaining, interesting and full of amazing, real-life characters.” While the period’s glamour and suspense, passion and comedy––the very stuff of great films––would seem perfect for a Hollywood treatment, very few films have actually taken up the subject. We look at five movies, which in very different ways turned their lenses on the Blacklist and the atmosphere of fear and suspicion it engendered. 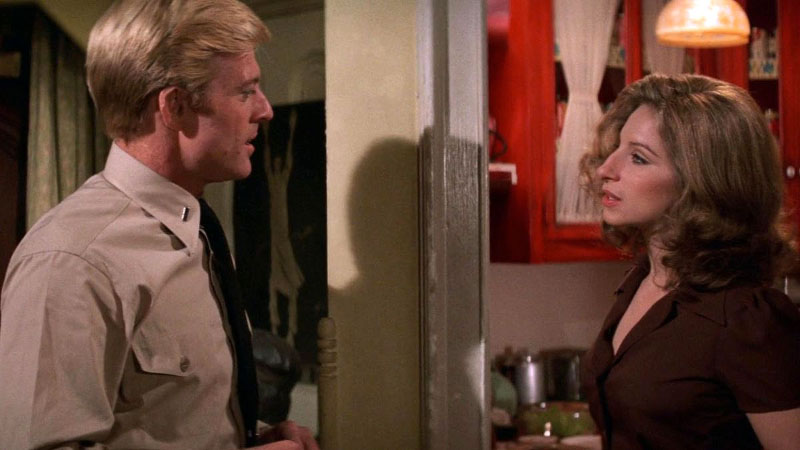 The Way We Were | Romancing the Blacklist

Sydney Pollack’s 1973 sweeping saga The Way We Were with Barbra Streisand and Robert Redford is the quintessential Hollywood romance. Its heart-tugging tale follows the tumultuous relationship between 30s campus activist Katie Morosky and golden boy Hubbell Gardiner, from their college days, to falling in love during the war, to finally marrying and settling down in post-war Hollywood. Beyond its “misty water-colored” images set to Marvin Hamlisch’s haunting score, The Way We Were was the first major film to deal seriously with the Blacklist. For Arthur Laurents, who adapted his 1973 novel of the same name for the screenplay, the story was very personal. “I had never seen a movie or a play set in that period in which those I knew either lived by fighting for the [Hollywood Ten] or died by turning informer,” explained Laurents in his memoir Original Story. “I was blacklisted, I had my passport taken away. I believed it wasn't un-American to be a member of the Communist Party; it was un-American to be on the House Un-American Committee. I still believed that and I wanted to say it through a heroine who was a Jewish Communist. In a Hollywood movie." Laurents pushed for Streisand, whom he directed in her first Broadway show, I Can Get It For You Wholesale,to play Katie Morosky. Finding the right man to play Hubbell, however, proved a bit of nightmare when actor after actor turned the role down, feeling the male part was only a foil for Streisand’s character. When Sydney Pollack came on board to direct, he was able to persuade his friend Robert Redford to take the role, but only under the condition that the Hubbell part be substantially rewritten. To do this, the filmmakers fired Laurents and then brought on a variety of other screenwriters, including Dalton Trumbo. As the screenplay got patchier with each re-write, the filmmakers finally rehired Laurents to bring back some of the passion, if not the politics, of the original. By then, however, the studio saw the film as much more of romance than a political drama, and most of Laurents’ takedown of the Blacklist ended up on the cutting room floor. Looking back, Redford acknowledged that the creative team would “have preferred a more political Dalton Trumbo-type script” but Pollack and the studio “came down on the side of the love story.” Yet even pared back, the Blacklist still plays a critically dramatic role. It is the fear that permeates Hollywood in the wake of the HUAC hearings that ultimately pushes Katie and Hubbell to realize they are too different to stay together. In the end, the film proved a huge hit, going on to be nominated for six Oscars and winning for Best Score and Best Song. 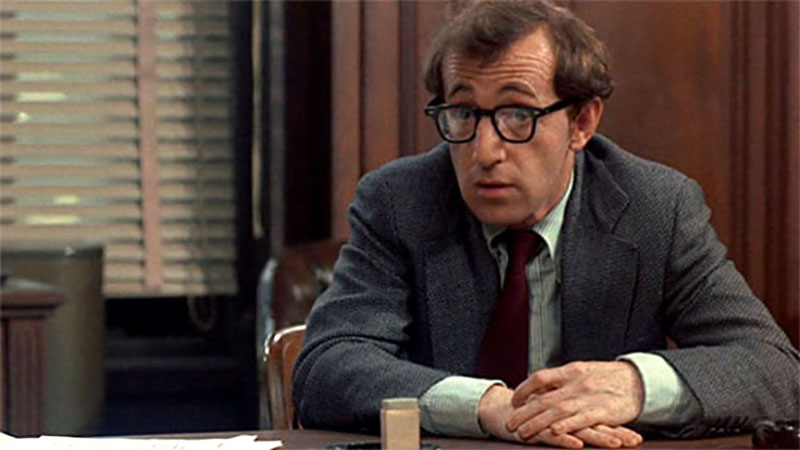 The Front | History as Farce

After having lived through the tragedy of the Hollywood Blacklist firsthand, screenwriter Walter Bernstein and director Martin Ritt decided in 1975 to turn their experiences into a comedy. During the time the two worked together on the 1951 TV show Danger (with Ritt then an actor), Bernstein was named in Red Channels (a newsletter that listed the names of possible red-leaning people who worked in the broadcast media) and subsequently blacklisted from writing for TV. The next year, Ritt lost his job at CBS after being singled out by Red Channels’ sponsoring newsletter, Counterattack. For years, Bernstein struggled writing unaccredited scripts before Sidney Lumet hired him to pen the 1959 film That Kind of Woman. Ritt found work in theater and teaching before directing Edge of the City in 1957. The two decided early on that the best way to capture the Blacklist’s devastating effect was to showcase its absurdity. In The Front, Howard Prince (Woody Allen), a bumbling cashier and two-bit bookie, agrees to front scripts a rfor a blacklisted writer (Michael Murphy) in exchange for a little extra cash. Things go south, however, when a TV actor, Hecky Brown (Zero Mostel), is pushed by a HUAC-like committee to get the goods on Prince. Faced with an impossible choice, Brown kills himself, and Prince must confront the terrible cost exacted by the political situation he had previously taken for granted. For Mostel, the suicide in the story was deeply personal since his own friend, actor Philip Loeb, ended up killing himself after being blacklisted. Allen, who’d previously shied away from doing anything he hadn’t either written and/or directed, agreed to do The Front because “the subject was worthwhile. Martin Ritt and Walter Bernstein lived through the Blacklist and survived it with dignity, so I didn't mind deferring to their judgment.” In making The Front, Ritt and Bernstein not only returned to those dark days, but in their small ways tried to make things right. In Inside Out: A Memoir of the Blacklist, Bernstein wrote that they cast Mostel “because he is right for the part and because he had been blacklisted. We have cast all the parts we could that way, deliberately. It is our revenge.” In addition to Mostel, three other actors (Herschel Bernardi, Lloyd Gough and Joshua Shelley) had also been blacklisted. Bernstein received his one Oscar nomination for “Best Writing, Screenplay Written Directly for the Screen” for The Front. 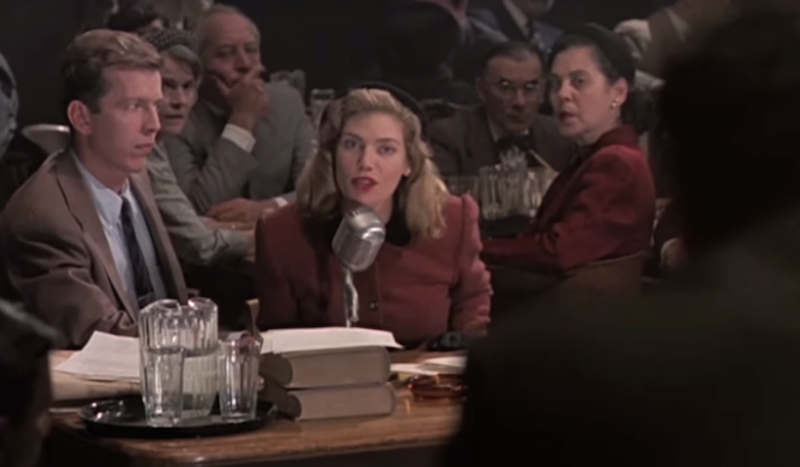 The House on Carroll Street | Lined with Good Intentions

In Peter Yates’ 1988 thriller The House on Carroll Street, screenwriter Walter Bernstein, who’d also penned The Front, uses the Blacklist as the backdrop for a thriller about an American conspiracy to help ex-Nazis. Set in 1951, Emily Crane (Kelly McGillis) is a Life photographer who loses her job after she refuses to name names to a Senate committee investigating communists in the media. Finding work as a companion to an old lady (Jessica Tandy), Crane spies strange behavior at the house across the street that involves none other than the Senate official, Ray Salwen (Mandy Patinkin), who turned her life upside down. Primarily a thriller, The House on Carroll Street treats the Blacklist and history of red baiting less as a historical event and more as a symptom of hypocrisy and corruption at a national level. Patinkin, who was better known for his musical and comedy roles, took the part to explore the complex darkness of figures like Roy Cohn, the attorney for Senator Joe McCarthy, on whom his character is loosely based. "What began to surface for me was a character of passionate belief, in the same way that Oliver North believes,” Patinkin told The Philadelphia Inquirer’s Steven Rea. “These people are breaking laws, but they do it with great patriotism, and they believe that what they're doing is 100 percent correct and for the good of America.”

Irwin Winkler’s 1991 drama Guilty By Suspicion is one of the first Hollywood films to deal directly with the Hollywood Blacklist. Robert De Niro plays David Merrill, a director who lands in the middle of the Blacklist when he returns to the United States in 1951. When he refuses to name names to HUAC, Merrill finds himself unemployable and shunned by his former colleagues. Then Darryl Zanuck (Ben Piazza) offers him a pact with the devil: testify one time and you get to direct films again. Winkler, who made his name producing films like Rocky and New York, New York, took on writing and directing Guilty by Suspicionafter the original director, Bertrand Tavernier, and screenwriter, Abraham Polonsky, jumped ship because of creative differences. Polonsky, who’d actually been blacklisted in 1951, was furious with Winkler for changing Merrill from an actual communist to a liberal with communist friends who was merely “guilty by suspicion.” Polonsky supposedly based Merrill on John Berry, a director Edward Dmytryk denounced as a communist to HUAC in order to be able to direct films again after he’d gone to prison as part of the Hollywood Ten. Although Polonsky felt it necessary to draw a hard line about whom the Blacklist hurt, others, like De Niro, tried to take a larger view of the situation. “I’ve always felt very, very badly about the whole situation for both people who gave names, and who didn’t give names and whose careers were ruined,” De Niro told The Today Show’s Gene Shalit. “It must have been a very, very tough situation for everybody.” While the film gained praise for bringing the Blacklist to light, many critics damned it for playing it too safe. “The fact that the film has been made at all shows to what extent we’ve recovered from the blacklist climate,” wrote Jonathan Rosenbaum for Film Comment. “But the fact that it leaves so much of the story still untold shows to what extent we haven’t.” 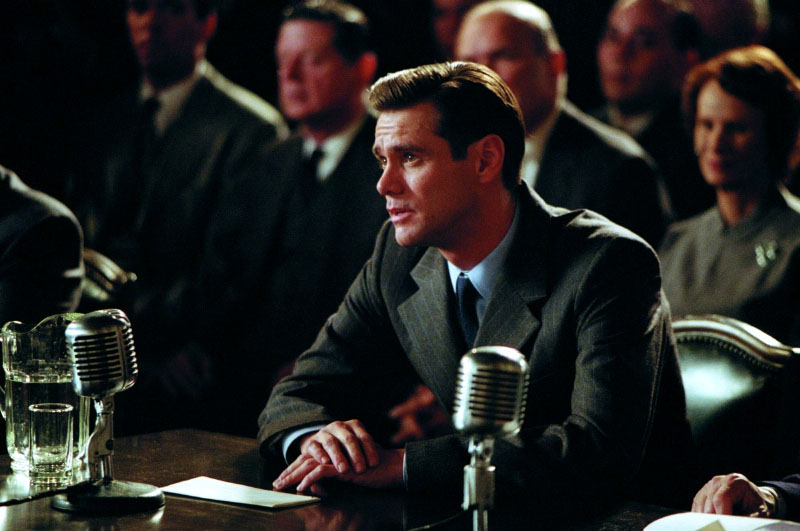 In Frank Darabont’s 2001 period piece The Majestic, amnesia is introduced as both a plot device and a metaphor for Hollywood’s attempt to bury the Blacklist. Written by Michael Sloane, a high school pal of Darabont, The Majestic recounts the tale of Peter Appleton (Jim Carrey), a Hollywood screenwriter about to be called before HUAC for having socialized with communists years before, or more specifically, having tried to date a girl who was a party member. Desperate and depressed, he drinks himself into a stupor before driving up the coast where he veers off the road, crashing into the ocean below. When he awakens on the beach, he has no memory of what happened. Walking to the small town of Lawson, Carrey is mistaken for Luke Trimble, the son of the local movie theater owner (Martin Landau) who’d been lost at war. Treated to a hero’s welcome, Peter begins to believe he is Luke, taking up with his old girlfriend (Laurie Holden) and making a new life for himself. When news of the witch-hunts trickles up from Los Angeles, Peter begins to remember who he is and what happened to him. For the most part, HUAC is seen at a distance, showing up as footage of John Howard Lawson testifying on television. While the Blacklist is played out in the background, the corrosive effect of it becomes more apparent as citizens jump in to take a side on the issue. “The Blacklist era was to the entertainment industry what the Vietnam War was to America in the ’60s and ’70s,” Sloane told Variety, “a clash of well-intentioned ideals, with no side clearly right or wrong.”