THE LAST WORD | Capturing the Moment

When Stuart Ross Fink approached his friend and filmmaker, Mark Pellington, with the concept for a film that would become THE LAST WORD, the director saw a great opportunity: “I was very interested in the subjects Stuart's idea touched upon—mortality, family, legacy, identity.” Six months later, Fink had hammered out a screenplay. Then the two, along with producer Anne-Marie Mackay, took another year and a half to bring out the right mix of comedy and drama for their story about an 80-something woman, Harriet Lauler, out to reinvent her life. While Pellington is acclaimed for his dynamic visual style, he also brings a unique creative energy to his set. Shirley MacLaine (who plays Lauler) is no stranger to working with great directors. She has already won one Academy Award and has been nominated for five others. In working with Pellington, she found a “deeply and almost disturbingly talented” collaborator. “He lives in the moment. It makes working with him fun,” MacLaine explains. In a film about realizing the importance of every second, Pellington instilled a sense of spontaneity and immediacy to the production. “Both Mark and Stuart were fantastic in letting the film be molded moment to moment by the actors,” recounts Thomas Sadoski, who plays the radio station manager who hires Harriet as a DJ. “As we worked, it grew and became something larger than it initially was. That's an exciting thing to be a part of.” Throughout his career, working in film, TV, music videos, or art projects, Pellington finds a way to infuse both the media and his work with an unexpected creative energy.

Going All The Way | Capturing the World Inside 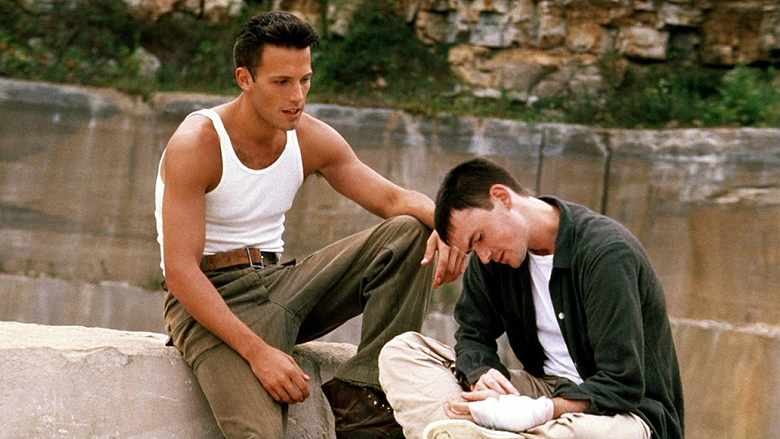 At the 1997 Sundance Film Festival, Mark Pellington made a splash with his period coming-of-age drama, Going All The Way. Dan Wakefield adapted his own 1970 novel about two men—Sonny (Jeremy Davies) and Gunner (Ben Affleck)––who reconnect after returning home from doing military service during the Korean War. While in high school, Gunner, the big man on campus, had little to do with the shy and scrawny Sonny, though the army and time have changed them. Influenced by Asian philosophy while stationed in Japan, Gunner now finds in Sonny's solitary nature a reflection of his own yearning for something deeper and more meaningful. Back in Indianapolis, the two forge an unlikely, but necessary alliance as they court various women (Rachel Weisz and Rose McGowan), clash with their parents (Lesley Ann Warren and Jill Clayburgh), and chaff at the confining mores of fifties America. Pellington had wanted to adapt Wakefield's novel for a long time. "I had read the novel in college,” Pellington explains in Filmmaker Magazine. “When people asked me if I wanted to make a film, I would give them the book and invariably hear that it was too interior.” But the skills he'd developed making music videos taught him a rich, new visual vocabulary with which to express emotions. With subtle shifts of tone and perspective, Pellington makes us viscerally aware of the suffocating social censure and roiling sexual energy that make up this world. For the San Francisco Examiner's Barbara Shulgrasser, “Pellington's spin on the transition from adolescence to manhood as viewed through the eyes of novelist and screenwriter Dan Wakefield makes Going All the Way something special.” 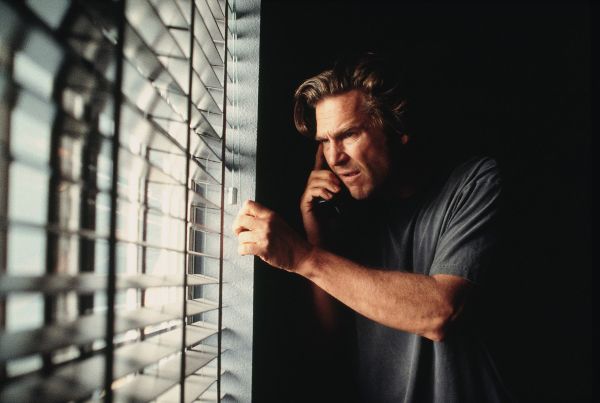 Hesitant to give away too much of his thriller, Arlington Road, during production, Mark Pellington told reporters in a Los Angeles Times article, “This is a cautionary film––about people watching other people." Harking back to the great paranoid thrillers of the 70s, Pellington captures what makes “people watching other people” so exciting. In the film, a political science professor, Michael Faraday (Jeff Bridges), struggles daily with his guilt and sadness over his wife's death, an FBI operative killed by right-wing terrorists. Quick to jump to elaborate suspicions, then doubt his own tortured mind, Faraday grows perplexed about how to handle the anxiety he feels towards the perfectly nice couple, Oliver and Cheryl Lang (Tim Robbins and Joan Cusack), who've recently become his neighbors. Casting a ominous shadow of danger over his film's serene suburban world, Pellington makes such hot-button topics like government surveillance and domestic terrorism both real and entertaining. In the end, the film's surprising emotional and narrative twists and turns showcase a director capable of taking genre filmmaking to the next level. For Los Angeles Magazine's James Greenberg, “Pellington understands how to build tension and suspense, and his conclusions are unsettling and uncompromising. He plays off people's natural distrust of authority and fans the flames of disbelief.”

In 1986, Mark Pellington was working as promo producer at MTV when he was tapped to shoot his first music video. He was given miniscule $10,000 budget to showcase the look and feel of Noel's chart-topping new song, “Silent Morning.” It proved such a hit, that Pellington was then hired to direct and/or edit music videos for bands like De La Soul, Deep 6, and Public Enemy. In 1992, Pellington was approached about bringing his talents to make the official music video for Pearl Jam's song, “Jeremy.” Pellington told Rolling Stone that “the lyrics intrigued me—I spoke to Eddie [Vedder], and I really got connected to his passion." Manufacturing a collage effect by machine-gun editing together graphics and still photographs with the actor Trevor Wilson playing the title character, Pellington creates an explosive visual interpretation of Pearl Jam's song about a teenage boy committing suicide. Entertainment Weekly described it as “an Afterschool Special from hell.” At the 1993 MTV Video Music Awards, the video won four awards, including Best Video of the Year and Best Direction. The next year, Pellington won the first MTV Europe Music Award for Best Video for Whale's “Hobo Humpin' Slobo Babe.” Over time Pellington has applied his unique visual style and approach to videos for bands as diverse as U2, Anthrax, Jon Bon Jovi, The Flaming Lips, Bruce Springsteen, and Michael Jackson. “I love collaborating with artists and when given trust and free reign, usually the best artistic result emerges,” explains Pellington on his website. “They are not bound by conventional narrative demands or the time limitations of commercials.”

The United States of Poetry | Making the Word Come Alive 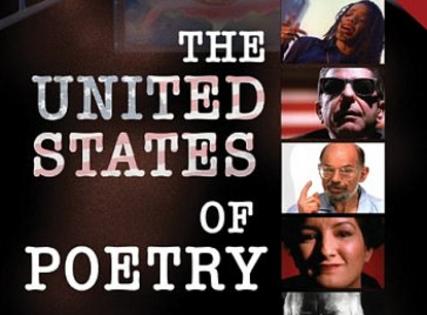 In 1995, Mark Pellington brought his visual sensibilities to literature with his groundbreaking series, The United States of Poetry. Producer Jordan Blum, who was trying to create a TV show on poetry, was watching MTV's Buzz when he first spied Pellington's work. “It really was just this very, very surreal collage television program, and it was poetry,” Blum explains in Cristin O'Keefe Aptowicz's Words in Your Face: A Guided Tour Through Twenty Years of the New York City Poetry Slam. “I thought, ‘Oh my God, this would be amazing with these poets'.” In 1991, Pellington teamed up with Blum and poet Bob Holman to create the PBS show, Words in Your Face, which brought together 20 slam poets and performance artists. Pellington made sure each piece realized the spirit of the poem. "I really wanted to give each piece its own voice, its own feel, its own emotion," Pellington told The New York Times. "The ones that are stories are being brought to life a little more and the ones that are internal are very stationary.” A few years later the same team reunited to create a five-part series, The United States of Poetry, for the Independent Television Service (ITVS). Traveling across the country to speak to different poets in a wide range of locations, the series brings a visual energy to amplify the spirit of 37 different poems. For many, the show opened up the world of poetry to a whole new audience. “It's poetry as you've never experienced it,” exclaims TV Guide. The United States of Poetry “tosses aside the textbook approach to poetry and drags it, kicking and screaming... into this wired world.” 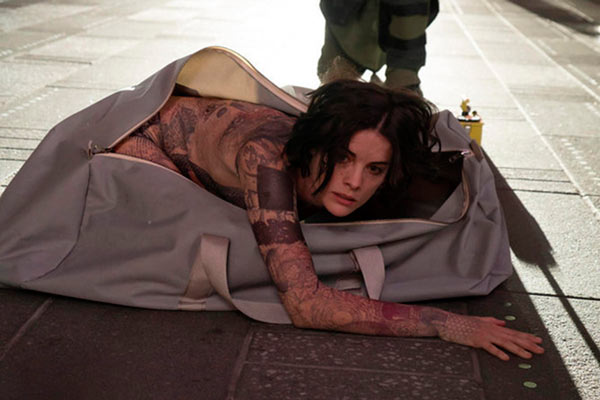 Over the years, Pellington has infused various television shows with his distinct visual flair. In 2015, Warner Brothers Television sent him the script for a new pilot called Blindspot. “I read it that night and immediately knew that it was going to be a TV series––the hook was so strong that I could see the series unfolding, I could see the mythology,” recounts Pellington to Filmmaker Magazine. When the show starts, the New York City police have found a naked woman left in a duffel bag in Times Square. The Jane Doe (Jaimie Alexander), suffering from a drug-induced amnesia, has no idea what happened to her, or why. But her body tells a different story. On her back, a series of enigmatic tattoos slowly give up her secrets to the FBI team, lead by agent Kurt Weller (Sullivan Stapleton), tasked with investigating her case. In directing the pilot, Pellington showcases a series of visual influences without losing the thriller's dramatic tension. “I can be a little more aggressive visually or a little more contemplative on a certain scene, because I can look at it on another level,” Pellington explains to KPCC's The Frame. “I love shifting from medium to medium—or really form to form.” His attention to every visual and narrative detail pays off. “With its meticulously crafted visual design and precise calibration of performance and action, Blindspot is emblematic of Pellington's directorial signature,” Jim Hemphill explains in Filmmaker Magazine. “It synthesizes the narrative tautness of Arlington Road with the deft handling of character one finds in Henry Poole is Here and I Melt With You, and contains the depth and detail of Pellington's documentaries with the dynamic integration of light, color, and cutting one finds in his award-winning music video work.”