From Asta to Paterson's Marvin

Jim Jarmusch’s PATERSON follows a week in the life of Paterson (Adam Driver), a bus driver and poet in Paterson, New Jersey. Living a life of serene simplicity, Paterson spends his days ferrying passengers across town and his nights with his wife, Laura (Golshifteh Farahani), and their English Bulldog, Marvin (Nellie). With her sad eyes and soft grunts, Nellie delivers an unforgettable performance as Paterson’s enigmatic companion, a creature who simultaneously grounds him and turns his life inside out. Her memorable turn won the 2016 Palm Dog at the Cannes Film Festival, an honor given by international critics for the best performance by a canine. Sadly, the award was given posthumously, as Nellie, a former rescue dog adopted by her trainer, William Berloni, passed away a few months before the festival. “Nellie was a beautiful dog,” says PATERSON producer Carter Logan. “And her facial expressions were really great, but what made her particularly special was her unusual set of vocalizations—she did these kind of guttural, growly sorts of noises, and those sounds made Marvin into a real character.” To honor Nellie’s poignant performance, we remember other great dog stars. 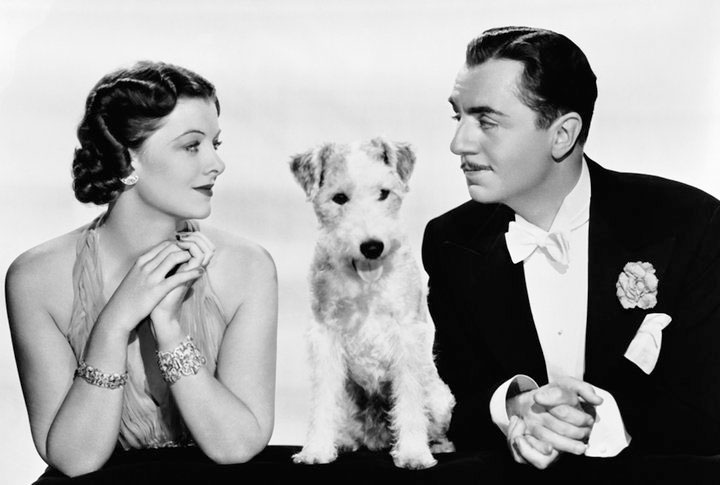 Born in 1931, Skippy was destined to be a Hollywood star. At just three months, the Wirehaired Fox Terrier was already in training, being shepherded by some of Hollywood’s best dog handlers. At six months, Skippy popped up in a Three Stooges picture. When he turned four, he was cast in his defining role, as the yapping sidekick, Asta, in The Thin Man. Although Dashiell Hammett specified a Schnauzer in the novel that inspired the movie, the film’s director, W. S. Van Dyke, wanted a more theatrical and dapper breed. When he met Skippy, he cast him immediately. As Nick (William Powell) and Nora Charles (Myrna Loy) sip martinis while solving murders, Asta scurries about providing a droll canine commentary on the zany antics of his human companions. Audiences were so taken with him that MGM played him into the marketing of the sequel. The New York Times reported, “Asta, the dog that fought with William Powell and Myrna Loy for top honors in The Thin Man…will compete again with the two in Metro’s After The Thin Man.” Skippy departed from the series after the second movie, leaving the role of Asta to be played by other dogs. Skippy went on to appear in a number of other famous films, including The Awful Truth, Bringing Up Baby, and Topper Takes a Trip. But no later role quite lived up to the iconic status of Asta, whose popularity spurred a growth market in Wirehaired Fox Terriers. While audiences loved him, his co-stars were not quite as enamored. Loy confessed, “Our relationship was hardly idyllic,” especially after the dog nipped her on set. 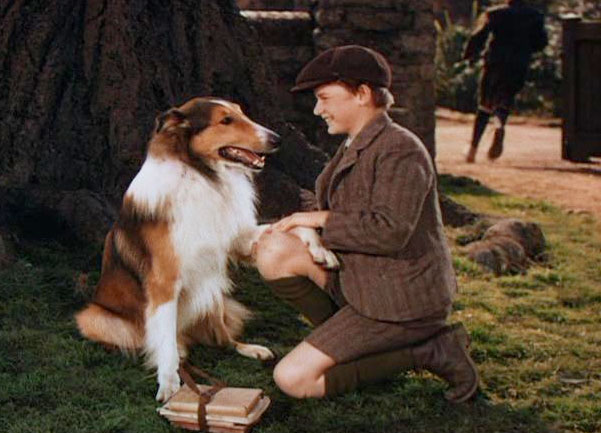 Like many other Hollywood legends, Pal’s road to stardom began as an accident. In 1941, his owner, Howard Peck, brought the Rough Collie to animal trainer Rudd Weatherwax to cure him of his barking and motorcycle chasing. Weatherwax eventually adopted Pal, but didn’t see him having a future in the movies, going so far as to sell the dog. When he learned about MGM’s plans to bring to the screen Eric Knight’s beloved novel, Lassie Go Home, however, he quickly bought Pal back and started training him for stunt work. The original part of Lassie (quite rightly) went to a female Collie. But during production, Pal, who’d been brought on to do water tricks, won the producer’s heart. MGM’s head Louis B. Mayer supposedly quipped, “Pal had entered the water, but Lassie had come out." Pal went on to make seven films in all, and then later starred in the first Lassie TV series. When MGM decided to retire Lassie, Weatherwax negotiated a deal by which he would retain rights to the name “Lassie” in lieu of $40,000 of back wages owed him. In so doing, Weatherwax guaranteed that subsequent Lassies would be Pal’s descendents. Like Pal, each subsequent “Lassie” was also a male, a fact Groucho Marx pointed out in his quip, “Ever since the public found out that Lassie was really a male, they've been thinking the worst about Hollywood." Pal’s real legacy may be in how he changed American’s perceptions of dogs and especially Collies. During the 40s, the number of purebred Collies in the United States increased by more than six-times, going from about 3,000 to 18,000 by the start of the 50s. In addition, the inclusion of the dog as part of the family, to live inside and eat with everyone else, some historians believe to be a lesson Lassie taught Americans.

Petey/Pal | The Our Gang Movies 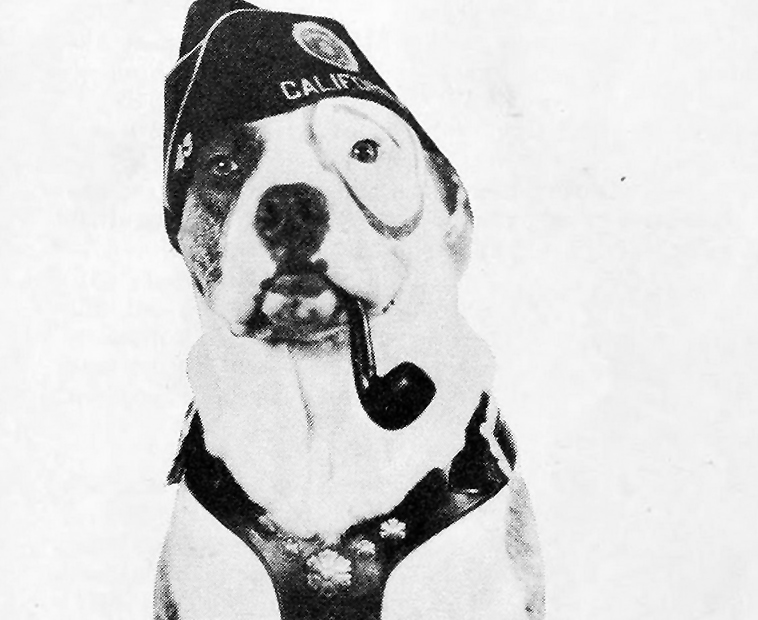 Born in 1925, Pal went on to star in a number of silent comedies before becoming a star, and then the unfortunate victim of a dark Hollywood mystery. Raised by Harry Lucenay, the American Pit Bull Terrier was bred for Hollywood, getting a cameo in Harold Lloyd’s The Freshman when he was just six months old. That same year he showed up as Tige in Educating Buster,one of the first two-reeler films in the Buster Brown franchise. Pal, who was born with a nearly complete ring around his eye–permanent dye was applied to complete the circle––made a striking addition to the classic comedy series. Pal went on to show up in more than 40 Buster Brown shorts before being picked by producer Hal Roach to play the dog in his Our Gang comedy series. Pal was immediately signed to a three-year contract with a starting salary at $125 per week. He went on to make 13 more Our Gang films before tragedy struck in 1930. Pal was murdered on set when he ate meat containing ground-up glass. No suspects were identified, and no one was brought to justice. The young actors in the series were heartbroken by the dog’s sudden demise. The Our Gang series continued with Pal’s son, Pete the Dog. To maintain continuity, the production team drew a ring around Pete the Dog’s eye to make him look more like his father. 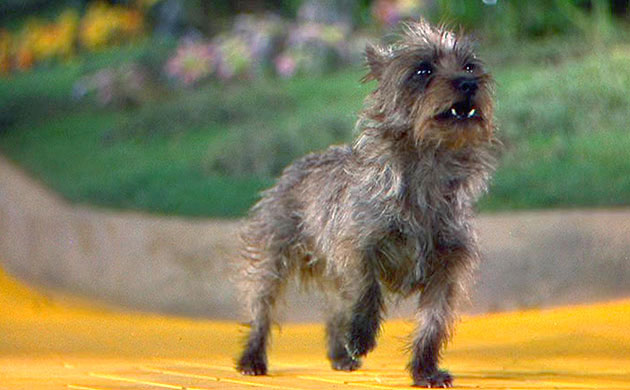 Toto/Terry | The Wizard of Oz

Terry, the Cairn Terrier, who played Toto was a well-seasoned actor before she took to the yellow brick road with Dorothy in The Wizard of Oz. Born in 1933, Terry was adopted by Carl Spitz after her original owners gave her away. With a little love and training, she quickly became a star. At one year old, she appeared as Shirley Temple’s pup, Rags, in Bright Eyes. Two years later she showed up as Spencer Tracy’s sidekick, Rainbow, in Fritz Lang’s Fury. But it was the role of Toto that put Terry on the map. The film also almost ended her career when one of the Winkie guards accidently stepped on her, crushing her foot. Judy Garland was so moved by her canine co-star’s plight that she tried to adopt her after letting her recover at her estate. For Terry, these were golden days. With a salary of $125 per week, she was bringing in more than many human actors on the film. After her success in The Wizard of Oz, Terry changed her professional name to Toto, making 13 more films before she retired in 1942. In 2001, Willard Carroll used Carl Spitz’s scrapbook of Terry’s escapades to write I, Toto: The Autobiography of Terry, the Dog Who Was Toto. 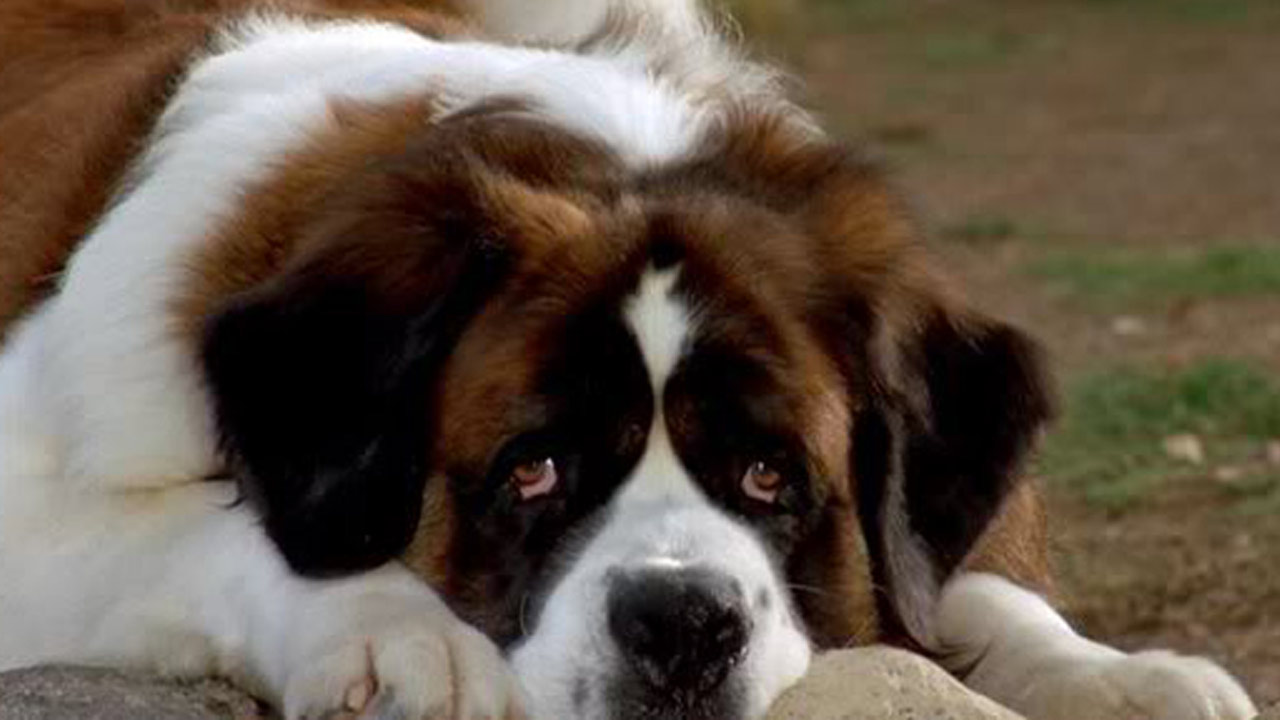 In making the family comedy, Beethoven, about an exuberant, drooling Saint Bernard who brings a family together by first tearing their house apart, trainer Karl Lewis Miller needed to find just the right canine. After working with twelve possible candidates, he settled on Chris, a Saint Bernard that the handler had adopted when he was just a pup. His choice was more than vindicated when Beethoven proved a box-office smash, with the dog getting as much ink as the film’s designated star, Charles Grodin. Chris reprised his role in the equally popular Beethoven’s 2nd. While other Saint Bernard dogs filled the role in the six additional straight-to-video sequels, it was Chris’s slobbering spirit that launched the franchise’s success. The film also affected a cultural shift in the public’s perception of Saint Bernards. One owner remembers how previous to the film being released strangers had visions of a snarling Kujo when they met him and his Saint Bernard. "There was a little more than a healthy respect and quite a bit of fear," Harry Welch tells The Los Angeles Times. "Now, we have strangers come up to the van, put their hand in the window and say, 'Ah, Beethoven.' " 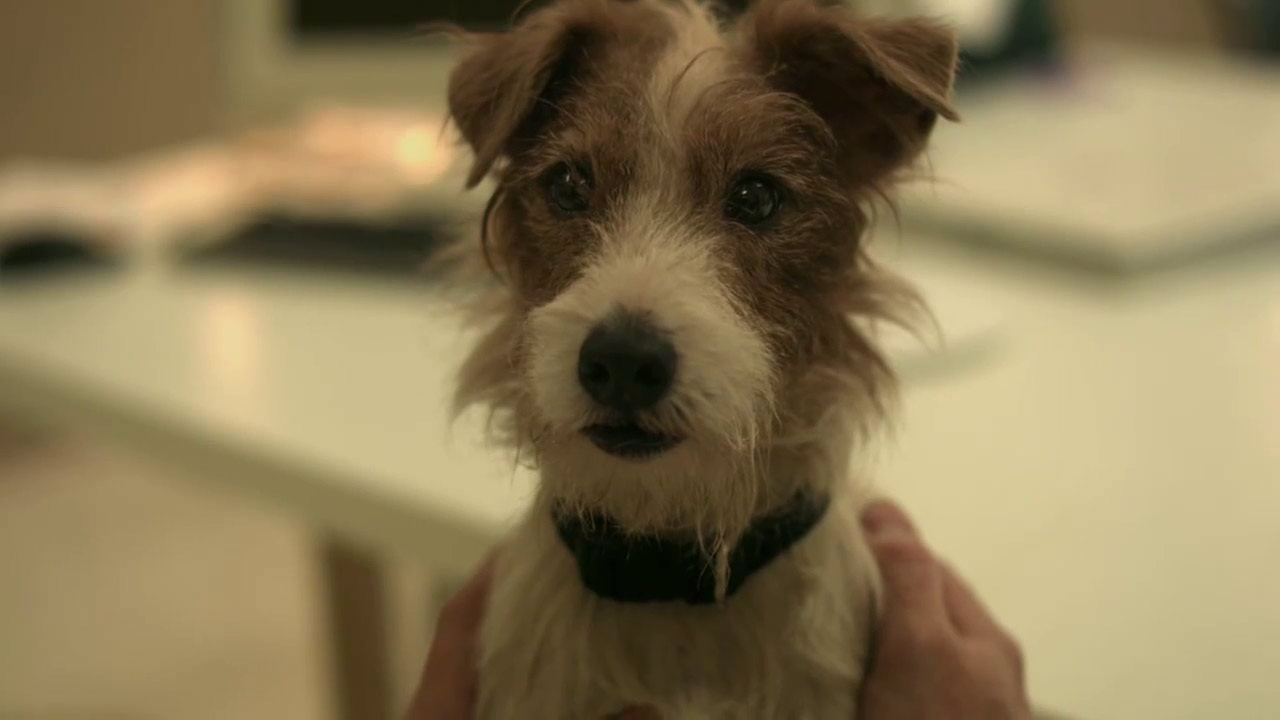 In Mike Mills’ film, Beginners, Cosmo, a Jack Russell Terrier, plays Arthur, the dog Oliver (Ewan McGregor) inherits from his father (Christopher Plummer). In writing the script, Mills imagined Arthur as Oliver’s “co-passenger” through the film. As a living connection to his deceased father, Arthur becomes for Oliver a friend, a confident, and a sentient example of how we can love something we can never really understand. Rescued by trainer Mathilde de Cagny (who also trained the famed Moose/Eddie from the TV sitcom Fraiser), Cosmo proved a quick study. He made his screen debut as Friday in the comedy Hotel for Dogs, and then showed up in Paul Blart: Mall Cop. But he really showed off his acting chops in Beginners as what Movieline’s Stephanie Zacharek describes as a “criminally adorable Jack Russell Terrier.” Cosmo proved as memorable to his cast mates as the audience at large. McGregor told The Bark, “On the set, I fell for Cosmo and so loved being around him and working with him that it was hard to know I’d have to say goodbye to him.” After the shoot, McGregor was inspired to adopt a dog all his own. 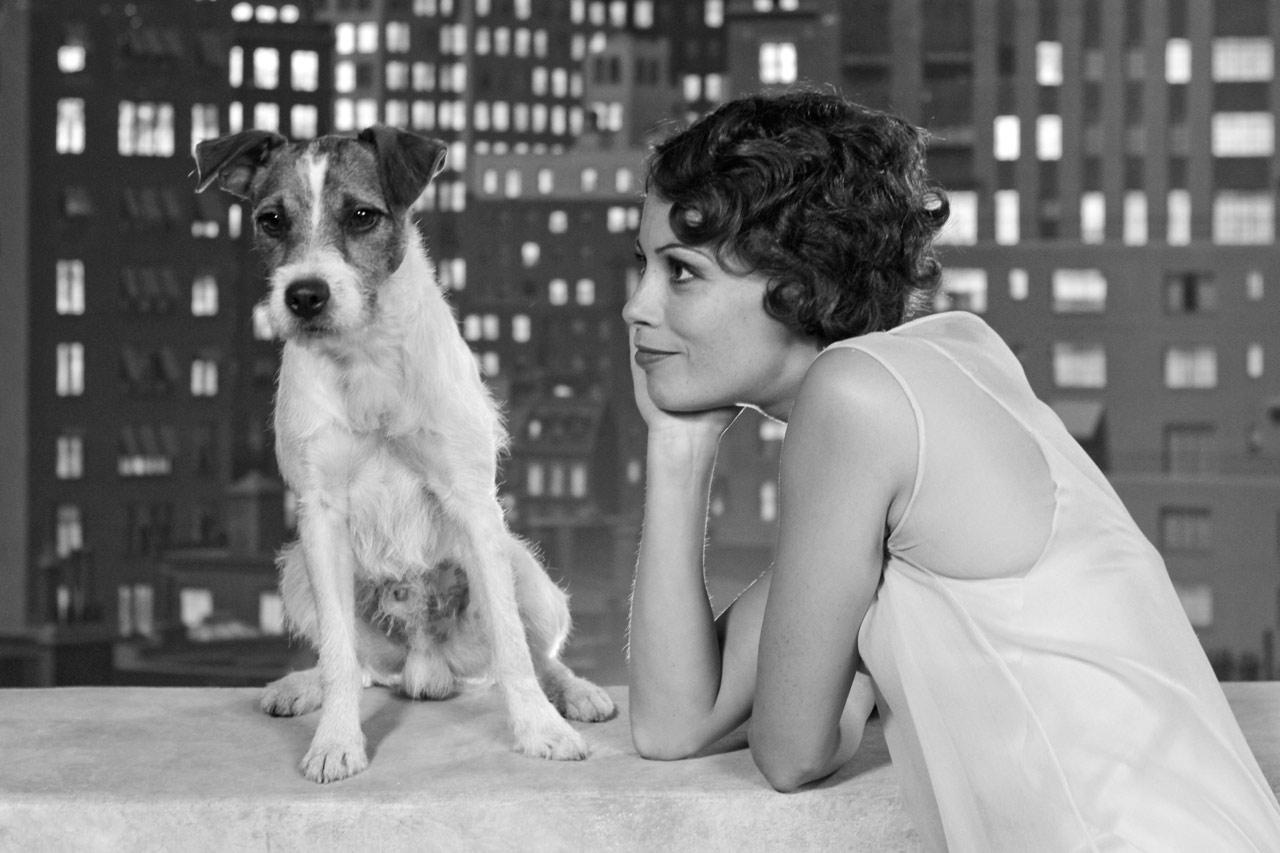 In the first chapter of his autobiography, Uggie—My Story, the Jack Russell Terrier who appears as The Dog in Michel Hazanavicius’s Oscar-winning silent-movie yarn, The Artist, describes his day getting ready for the Academy Awards ceremony. Even though he got fitted with a specially designed Chopard bow tie with a $60,000 gold bone attachment, Uggie himself wasn’t up for any awards. Not that his fans didn’t try. Several months earlier, Movieline editor S.T. VanAirsdale promoted a “Consider Uggie” Facebook campaign to prompt possible Oscar love for the pooch. On the big night, as The Artist won five Academy Awards, including Best Picture, Best Actor, and Best Director, Uggie left the stage with only the love of his adoring fans. In the nine years since animal trainer Omar Von Muller rescued him, Uggie had come a long way. “He was a crazy, very energetic puppy,” Von Mueller tells the Guardian. “And who knows what would have happened to him if he had gone to the dog pound. But he was very smart and very willing to work.” Uggie worked in a number of films and commercials before he got a starring part in Water For Elephants. The next year, Uggie got his big break in The Artist, for which he would receive the Palm Dog at Cannes, among other prestigious awards. In the lead up the film’s opening, Uggie worked relentlessly, appearing on talk shows and red carpets, even teaming up with Beginners’s Cosmo for a special photo spread for The Hollywood Reporter.