Captain Fantastic | The Other Father

In CAPTAIN FANTASTIC, Frank Langella plays Jack, the other father in the film. As Leslie’s dad, he is the grandfather of the six kids being raised by her husband, Ben Cash (Viggo Mortensen). Jack loves his daughter, and by extension, his grandchildren perhaps as much as he blames Ben for everything that has befallen them. In many ways, Jack is the emotional and ideological counterpoint to Ben’s free-spirited and audacious nature––a solid, concerned citizen deeply worried about his family and positive that Ben’s parenting skills are dangerous and irresponsible. For Langella, who brings his profound empathy and experience to the character, Jack is more a reflection of both fathers’ deep love than Mortensen’s antagonist. “We’re both complicated men who love the same woman and the same children,” explains Langella. “They’re actually not very different people and that’s probably the basis of their disagreement.” While Jack may come off as the antagonist, Langella is quick to point out that Mortensen’s character “isn’t a hero and mine is not a villain.” Over a long and much-applauded career on stage and screen, Langella has explored the full spectrum of human experience. “I like to play oddball men––not regular guys, because I’m not,” Langella tells The Telegraph. “I enjoy playing the various side elements…rather than the straightforward good guy or the straightforward villain.”

Diary of a Mad Housewife | A Striking Entrance 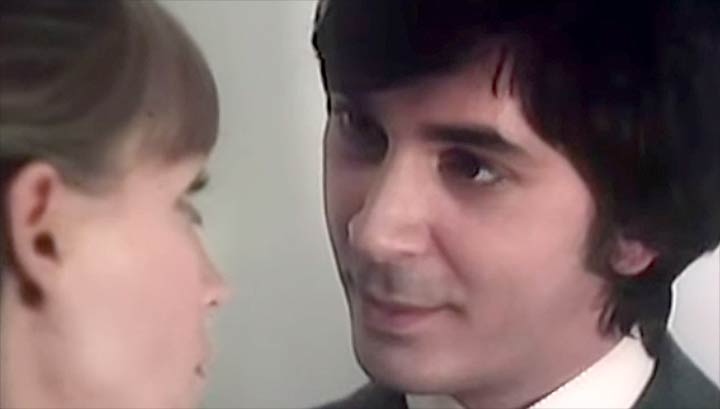 After having worked in the theater for years, Frank Langella made his screen debut in Frank Perry’s 1970 comedy-drama Diary of a Mad Housewife. Adapted by Perry’s wife Eleanor from a novel by Sue Kaufman, the film follows the tortured life of Tina Balser (Carrie Snodgrass), an educated, affluent Manhattan woman, who attempts to escape her suffocating marriage with her obsessive, controlling husband (Richard Benjamin) by starting an affair. At an uptown event, she meets and allows herself to be seduced by a novelist, George Prager (Frank Langella), who in the end turns out to be as demeaning and controlling as her husband. Perry, who’d created a name for himself making insightful independent films about complex emotional relationships, cast newcomers Snodgrass and Langella for two sides of his sophisticated triangle. For him, their fresh faces were as important as their obvious talent. “My films are actors’ films, films of human relationships,” Perry explained. “And for that you need the human face… The complexity, the excitement, all the drama taking place down deep flows up into the human face.” In his cinematic debut, Langella’s face resonated powerfully with audiences—simultaneously seductive, smart, single-minded and a bit sinister. Both Snodgrass and Langella’s performance were critically applauded. The New York Times’ Roger Greenspun described it as “a beautifully complex characterization.” Later, Langella was nominated for a Golden Globe for Most Promising Newcomer – Male, and won the National Board of Review Award for his work in both Diary and The Twelve Chairs. 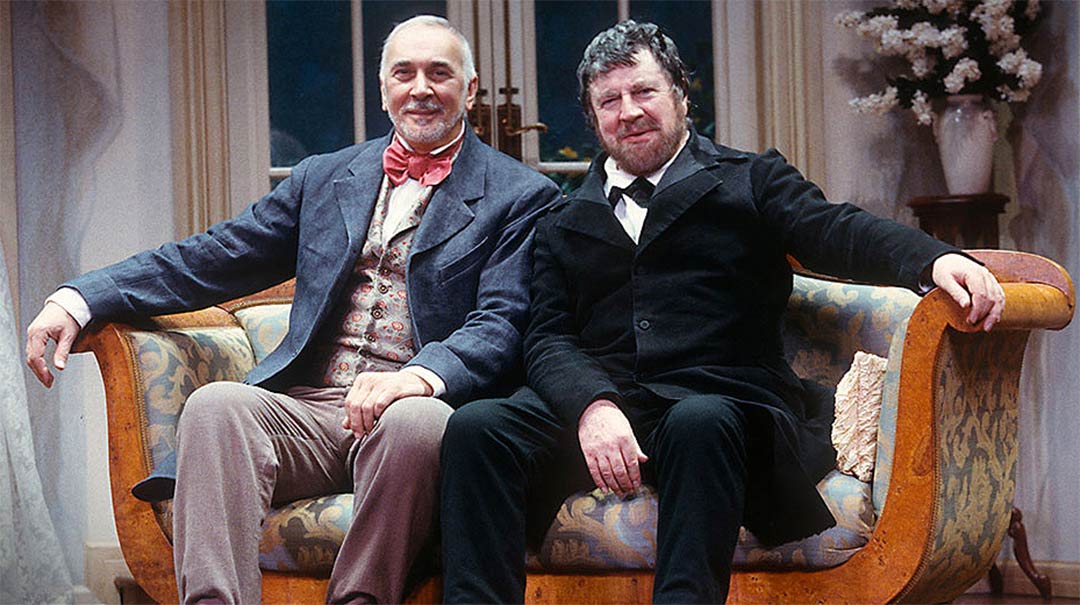 Before finding himself in film, or even theater, Frank Langella discovered in acting a way to become the person he was meant to be. “I was profoundly uncomfortable with myself as a kid,” Langella told The New York Times. And because of “an inability to chart the world at an age that was fragile and tender,” Langella turned to acting. After receiving a degree in theater arts from Syracuse University's College of Visual and Performing Arts, Langella made his New York stage debut in 1963 as the lead in an off-Broadway production of Ruth and Augustus Goetz’s The Immoralist. For the next decade, he honed his craft playing a range of parts in new and classic works Off-Broadway. Then in 1975, in his first Broadway production, Langella won a Tony for Edward Albee’s Seascape in which he plays a human-sized, heart-felt lizard. In his enthusiastic review, The New York Times’ critic Clive Barnes notes that “it would be so easy to play a lizard as a sort of Demon King or Godzilla, but Mr. Langella plays him precisely as one of those animals you have always longed to communicate with but never had the language.” Two years later Langella became even more famous playing another non-human in the immensely popular stage production of Dracula, a role he reprised two years later for the film adaptation. While Langella excelled in bringing humanity to reptiles and monsters, he was just as powerful playing fascinating human characters. In 1997, he won a Drama Desk Award for his role in the 1996 revival of August Strindberg’s The Father, and was nominated the next year for the 1997 revival of Noel Coward’s comedy Present Laughter. In 2002, Langella won his second Tony in another classic work, Ivan Turgenev’s exuberant farce Fortune’s Fool as the effete landowner Tropatcov. Playing the character as both comic and cunning, he was praised by The New York Times’ Ben Brantley: “While Mr. Langella is nearly always funny, he is ultimately as cuddly as a cobra.” Five years later Langella accepted his third Tony for playing the impeached president in Peter Morgan’s Frost/Nixon. After more than a half of a century on stage, Langella has become a theater legend, an actor who disappears into the characters he plays, only to surface with something remarkably new and surprising to show us. This year, Langella receives his fourth Tony win for his work in Florian Zeller’s The Father.

Starting Out in the Evening | Capturing Thought 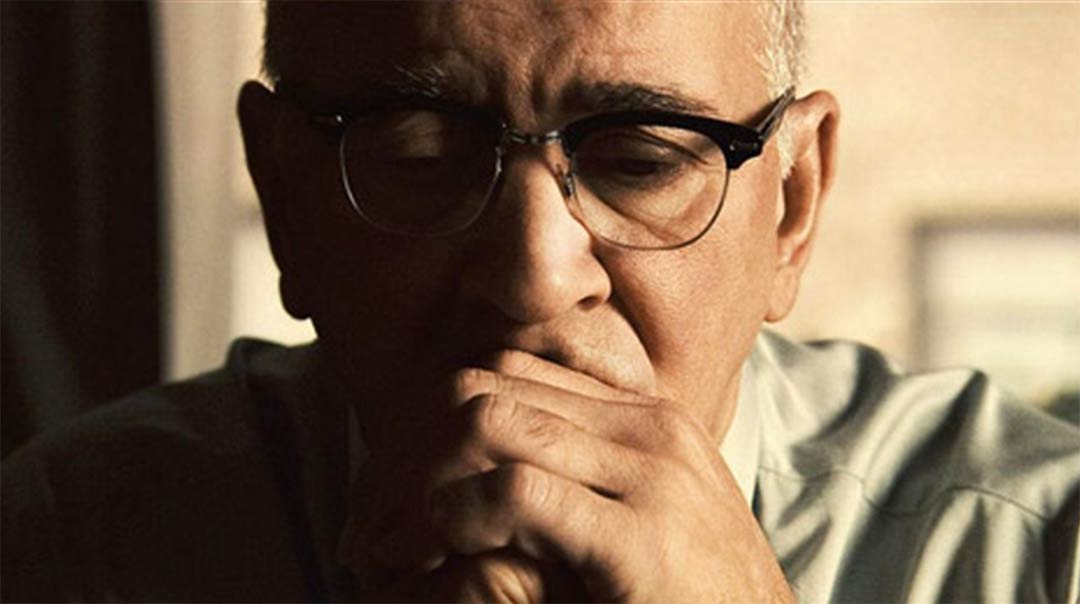 In Andrew Wagner’s lyrical chamber piece Starting Out in the Evening, Frank Langella plays Leonard Schiller, a once acclaimed novelist who now in later life has been plugging away on the same novel for the last 10 years. When a graduate student (Lauren Ambrose) is interested in making him the subject of her master’s dissertation, his life and work, which for so long he perceived in a rearview mirror, is now front and center. Brian Morton, the author of the novel on which the movie is based, was originally a bit apprehensive about the charismatic Langella being cast as his solitary Schiller. But after seeing Langella on set, Morton revised his opinion. “What struck me was that in the middle of all the action and movement and hurry, he’d somehow managed to create a sort of zone of stillness around himself. He radiated a sense of authority, but it was an authority of quiet. And just looking at him, I saw all I needed to know. I remember thinking, He’s got it. He’s Schiller.” After the film premiered at the Sundance Film Festival to acclaim, critics and audiences quickly noted the remarkable craft Langella brought to his depiction of Schiller. “This is what great screen acting is about,” exclaimed David Edelstein in New York Magazine. “It’s not a flamboyant performance. Langella is never more expressive than when he’s immobile, unsmiling, staring out from a body that has become too lumbering a vessel for his churning brain.” Indeed not only had Langella calmed Morton’s fears, but he had done the seemingly impossible, silently capturing the depth and vibrancy of a writer’s mind. For The New York Times’ critic A. O. Scott, “what is so remarkable about Mr. Langella is that he seems to hold Leonard’s intellectual cosmos inside him, to make it implicit in the man’s every gesture and pause.” His performance won theBoston Society of Film Critics Award for Best Actor, as well as being nominated for a number of other honors. 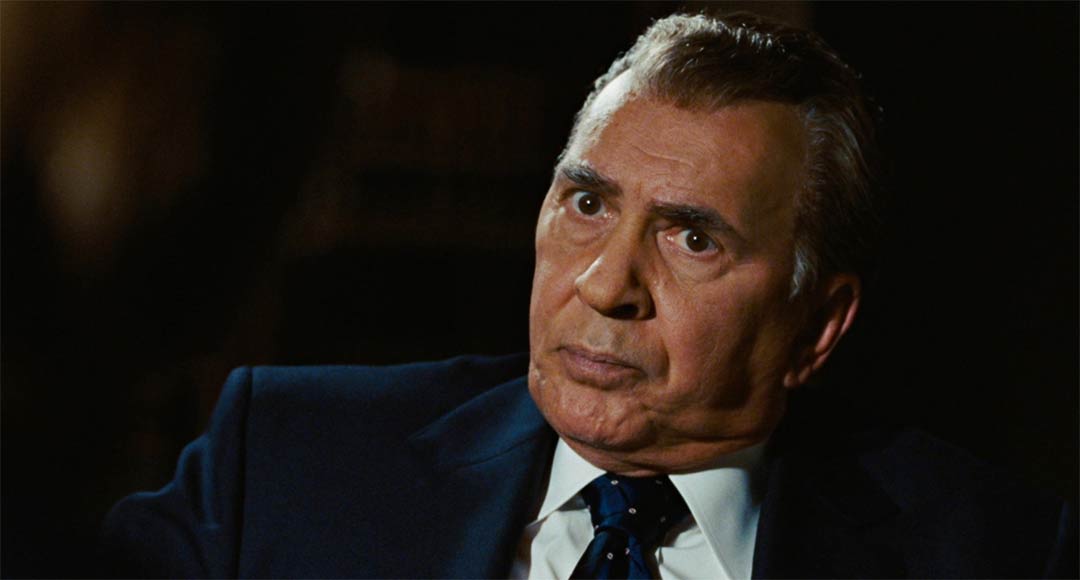 When Ron Howard started putting together a cast for his 2008 screen adaptation of Peter Morgan’s play Frost/Nixon, Frank Langella, who’d originated the part in London and New York, was not at the top of the list. But as Howard ran through his choices, many being A-list Hollywood stars that studio executives had pushed him to cast, he quickly realized, as he told The New York Times, that “to not use him seemed almost karmically imprudent.” Ironically, the first person to reject Langella as Richard Nixon was Langella himself. In 2006, when the play’s producer first approached him for the London production, Langella admitted to Charlie Rose that “I spent a fairly inordinate amount of time resisting and resisting” accepting the part. When he finally signed up, Langella dove right in, researching everything he could about the disgraced president. He visited the Presidential library and spent long days at NYC’s Paley Center for Media watching endless videotapes of the man. Then he put away his work to find his own character. “It has to be my Nixon,” Langella explains. “It has to be the essence of the man, or rather than an imitation of him, it has to be somehow what I believe the heart and soul of that particular character would be.” At the bottom of his pile of books and research, Langella found a man with whom he could identify. “Why shouldn’t he be human?” Langella asks in an interview for The New York Times. “Why shouldn’t he be sympathetic and touching, along with all the rest — vicious, cruel, a liar and a crook?” For critics, like The Los Angeles Times’ Kenneth Turan, Langella elevated the historical into something profound: “His Nixon is not an impersonation but an exceptional performance, a great actor's take on an unnerving character that… rises to remarkable levels of artistry.” The film, and especially Langella’s performance, was rewarded with multiple award nominations, including his first Academy Award nod for Best Performance by an Actor in a Leading Role. 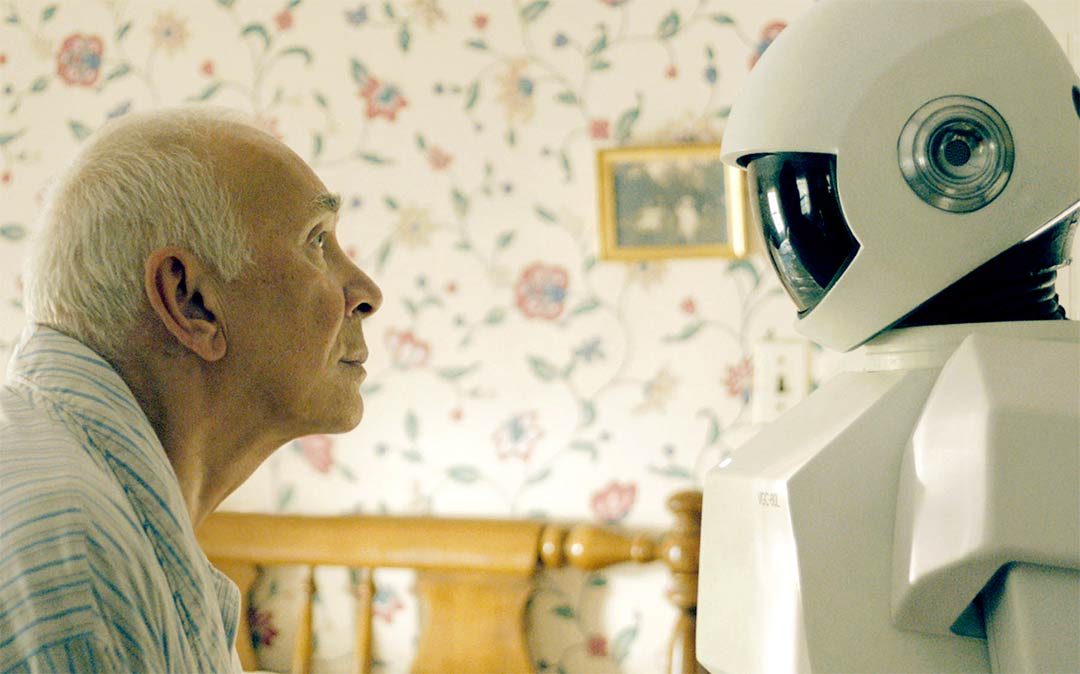 InJake Schreier’s debut feature, Robot & Frank, Frank Langella is paired with perhaps his most enigmatic costar to date: a white, child-sized robot. In the screenplay, which the writer Chris Ford expanded from a short film he’d made for his thesis film at New York University, Frank is an aging cat burglar who gets a new lease on life when his son (played by James Marsden) provides him a robotic caretaker. But rather than open up a new chapter, Frank uses the robot to try to return to his thieving ways. When approached by the filmmakers, Langella loved the story and the script, but also knew he could bring something special to the tale. “I thought it was missing the heartbeat of what it's like to be in your 70s, which is where I am,” Langella told NPR’s Fresh Air. Over lunch with the director and writer, Langella let the new generation into the psyche and emotions of a 70-year-old man, data they took with them to rewrite the script. The final product melds a heady mix of sci-fi, comedy, family drama, and crime caper into something fresh and original. “In his late career, Frank Langella has created some impressive performances, most notably in Starting Out in the Evening and Frost/Nixon, but in some ways Robot & Frank is his best showcase yet,” wrote the San Francisco Chronicle’s Mick LaSalle. “It's a beautiful performance in a movie that happily seems at no point trying to be beautiful.” Like with so many of his other performances, one of Langella’s greatest talents is magically bringing depth and emotion to characters who might at first appear completely lacking in them, making a conniving politician sentimental, giving an ageing writer hope, or revealing the heart in an implacable father.