Powerful performances from In the Bedroom to Denial

In Mick Jackson’s DENIAL, Tom Wilkinson plays Richard Rampton, one of Britain’s top lawyers who represents Debrorah Lipstadt after she is charged with libel by David Irving (Timothy Spall) for calling him a Holocaust denier. Rampton (as her barrister) works with solicitor Anthony Julius (Andrew Scott) to craft a legal strategy that insists on the undeniable reality of truth. But Rampton’s and Julius’ legal strategy to rebuff Irving’s claims comes at a steep price. For Wilkinson, Rampton was confronting an untenable situation in being asked to prove something that should never need to be proved in the first place. “He’s a Holocaust denier, for heaven’s sake,” Wilkinson comments. “If that guy’s ever going to win a suit, then what does it say for any sort of justice?” But to win the case, Rampton must deny his client the one thing she most wants, to give the voices of those most aggrieved by Irving’s claims a chance to be heard in court. To bring Rampton to life, Wilkinson constructs a fascinatingly complex and deeply human figure. A brilliant and impassioned scholar––Rampton learns German for the case––he is also enigmatic and strategic in the ways he negotiates his own moral outrage. It’s a stunning characterization about which the actual Rampton quipped, “Very good. Almost as good as the original.” Throughout his career, Wilkinson has demonstrated a particular genius for capturing characters of unexpected depth and remarkable intelligence.

In The Bedroom | At the Edge 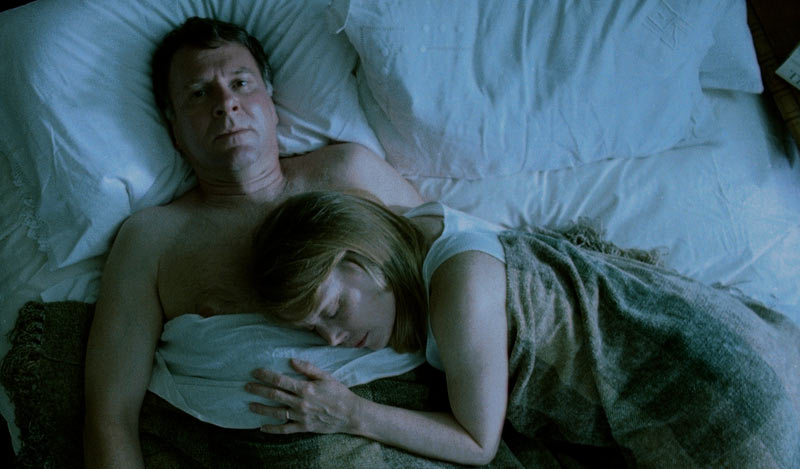 When Todd Field cast his 2001 drama In The Bedroom, about a middle-aged couple dealing with the murder of their son, he had a specific image for the actor who should play the father, Matt Fowler. “I wanted, first of all, a man—just a man,” Field explains in Filmmaker Magazine. “Obviously he had to be an actor, and a good actor, but I wanted whoever I cast to be a man, rather than somebody who was known as an actor, at least by an American audience.” Tom Wilkinson fit his job description perfectly. In 2001, except for a revealing performance in The Full Monty, Wilkinson was not a figure many Americans recognized. But he was an actor, who, in his 25 years on the stage, screen and TV, had amassed a lifetime of experience and praise. When the film came out, Wilkinson downplayed his performance, joking to The Guardian, “When you get to my age––and I've been doing it for a lot of years now––you know what to do on any given job." In many ways, his pragmatic professionalism fit the Maine doctor he plays in the film, a man whose genial exterior hides the dark and unfathomable emotions beneath. Indeed he embodies the part so well that The New York Times’ Stephen Holden writes, “Mr. Wilkinson's shambling New England doctor is so quintessentially American in look and manner that you'd never guess he was a British Shakespearean actor.” When the film starts, Wilkinson, happily married to Ruth (Sissy Spacek) for many decades, is a solid, stalwart citizen. But when his son (played by Nick Stahl) is murdered, and the culprit, the separated-but-still-married husband of the son’s girlfriend (played by Marisa Tomei), is only charged with manslaughter, Wilkinson’s façade crumbles under the weight of his grief. This “galvanizing portrait of a decent man pushed beyond his limits,” as Rolling Stone’s Peter Travers described his performance, was applauded by critics and audiences alike. The Academy Awards, the BAFTAs, and Screen Actors Guild nominated Wilkinson for Best Actor for his performance. 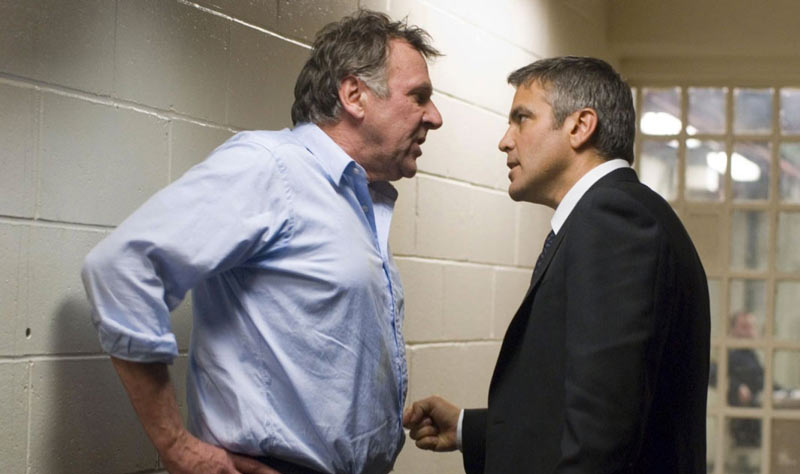 Tony Gilroy’s corporate thriller Michael Clayton starts with Tom Wilkinson delivering a voice-over ramble by a man clearly on the edge of a nervous breakdown. Written by Gilroy, the film focuses on the titled hero, Michael Clayton (George Clooney), a fixer for a powerful New York law firm, who must travel to Milwaukee to rescue his friend and colleague, Arthur Edens (Tom Wilkinson), who has suffered a breakdown in the middle of depositions. “It's a $3 billion class action lawsuit and the firm is defending the plaintiff, an agribusiness corporation alleged to have poisoned 450 people with a pesticide,” explains Gilroy to The Washington Post. While Wilkinson plays the chief litigator in the case, “you do not meet him as that person,” explains Gilroy. “You meet him several hours after, as a manic depressive. He's gone off his medication. He's had a psycho-religious conversion and decided he's on the wrong side of everything. It's a complicated part to play because we're seeing the after first.” While Clooney plays the film’s protagonist, Wilkinson, who changes from being the firm’s voice for corporate interests to a man undone by his conscience, becomes the soul of the film. In USA Today, Claudia Puig writes, “Clayton may be Clooney's best role in a body of work that is increasingly assured. Wilkinson is just as convincing as a brilliant but unhinged legal mind, with an innocence that leads to an epiphany, the nature of which he tries to articulate in his opening speech.” Many others applauded his nuanced and multilayered performance as well. He received a best supporting actor nomination from the Academy Awards, the Golden Globes, BAFTA, and the Screen Actors Guild. 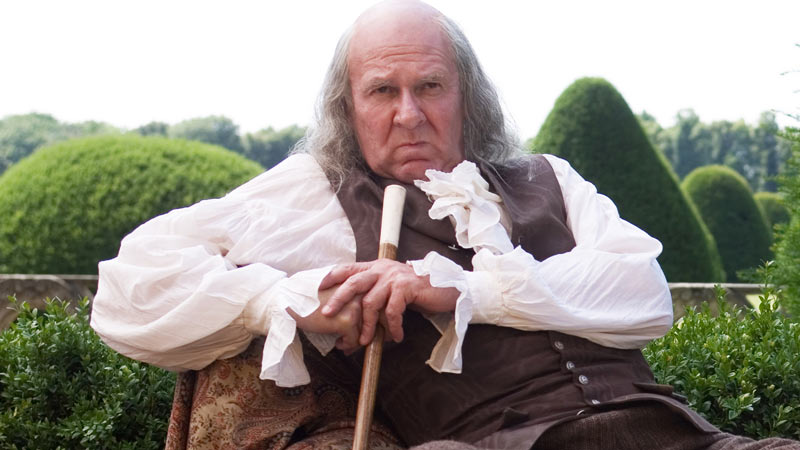 Tom Hooper’s 2008 HBO mini-series John Adamschronicles the heady days of America’s founding fathers through the figure of its titled patriot (played by Paul Giamatti). With a remarkable cast that includes David Morse as George Washington, Stephen Dillane as Thomas Jefferson, and Rufus Sewell as Alexander Hamilton, the filmmakers turned to Tom Wilkinson to embody the wise and witty Benjamin Franklin. The Philadelphian sage first shows up in the second part of the seven-part series, in which he schools the bullheaded Adams on political tact. But Wilkinson truly shines in part three, when he and Adams find themselves in France at the court of Louis XVI attempting to curry diplomatic favor. Here Wilkinson captures perfectly the moral complexity and libertine leanings of Franklin. On the one hand, Franklin shocks Adams by diving headfirst into licentious French society, giddily gossiping about his and others’ sexual liaisons. As The New York Times exclaims, “Some of the more delicious scenes are set in France, at the court of Louis XVI, where Franklin, deliciously played by Tom Wilkinson, wallows impishly in the hedonism — and flattery — of the French nobility.” At the same time, it is clear that Franklin never loses sight of his patriotic duty, using “a terrific mix of piercing intelligence, eccentricity, and calculating pragmatism,” as IGN suggests, to secure French funds and support for the fledgling democracy. Wilkinson’s profound talent for turning characters into multi-dimensional, mesmerizing figures was not lost on HBO’s president Colin Callender, who tells W magazine, “The great thing about Wilkinson is that, as an actor, he can do two diametrically opposed things at the same time…He makes his character a man of intellect and erudition but also a very human, ordinary person you can relate to.” Others found his performance equally memorable. Wilkinson was awarded both an Emmy and a Golden Globe Award for Best Supporting Actor for his performance. 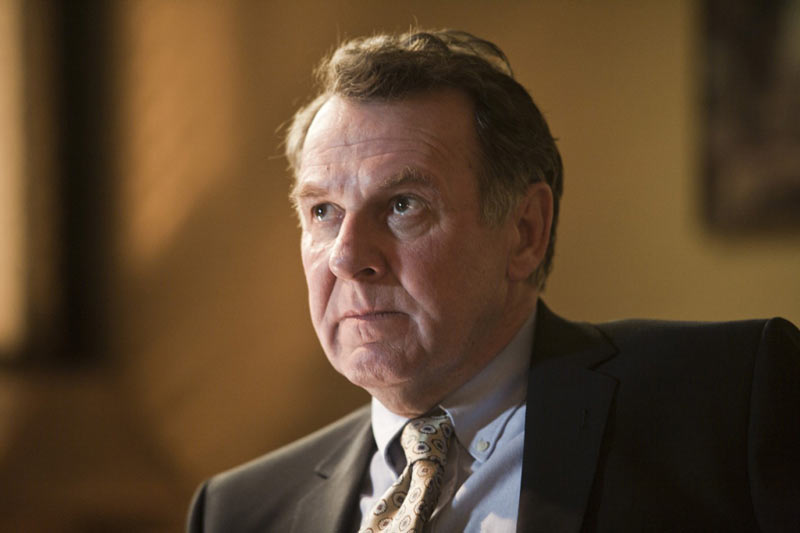 The Debt | The Weight of History

In John Madden’s 2010 thriller The Debt, Tom Wilkinson plays Stefan Gold, a former Mossad agent trying to come to terms with a past secret he shares with his ex-wife and co-agent, Rachel Stein (Helen Mirren). The film, adapted from the Israeli drama, Ha-Hov, by Matthew Vaughn, Jane Goldman and Peter Straughan, shuttles back and forth between the same characters decades apart. In 1965, the younger Rachel (Jessica Chastain) teams up with the younger Stefan (Marton Csokas) and David Peretz (Sam Worthington) to capture an ex-Nazi hiding out in East Berlin. More than 30 years later, Wilkinson, as the older David, must deal with the secret that the three team members share from that eventful mission. In some ways, Wilkinson has to play two characters at once: the hardened, cynical contemporary Mossad agent and the younger man buried deep inside him, the man whose moral courage and unflinching sense of duty was called forth so many years before. In a Huffington Post interview, Wilkinson reflects on the difference between him and his character: “Most of us, touch wood, have never been asked the big questions, like being called up to be a soldier in a war. I assume I’m not a coward, but there are huge areas of myself that have never been tested... moral courage, all those sorts of things.” As the calm and calculating older agent, Wilkinson bears the weight of history and moral courage, both his own and that of the mission he was part of, exuding, as Slant magazine’s Nick Schager puts it, “a complicated mess of responsibility, guilt, sacrifice, revenge, and regret.”

The Best Exotic Marigold Hotel | The Adventure of Life 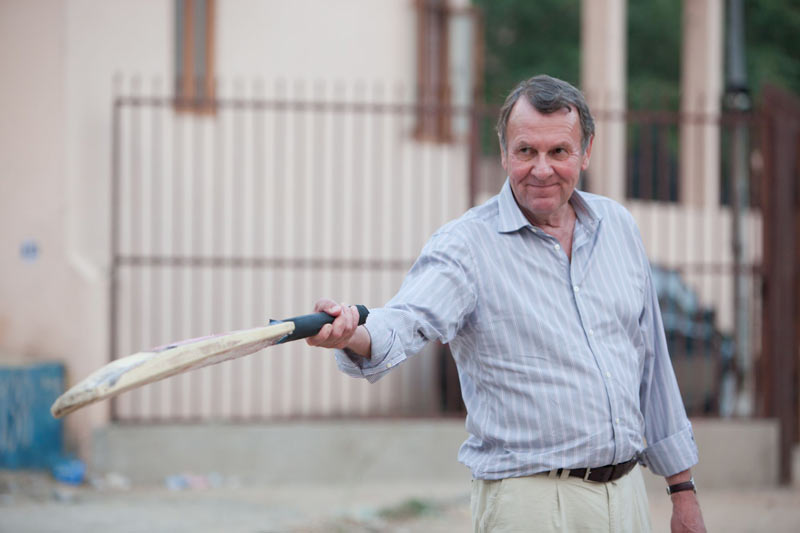 In John Madden’s 2012 film The Best Exotic Marigold Hotel, Tom Wilkinson plays GrahamDashwood, a retired High Court judge who returns to India to seek out the person he fell in love with many years before. He is one of a cast of older English folk who find themselves for various reasons washed up on the shores of a retirement home in India that doesn’t quite live up to its website’s promise. The motely crew, all having to suddenly rethink their retirement options, is composed of British acting aristocracy. Judi Dench plays a housewife trying to escape a family in England who seeks to “take care” of her. Maggie Smith plays a cantankerous career woman who’s come to India, a place she hates, as a way to hasten the process of procuring a hip replacement. Bill Nighy and Penelope Wilton play a couple forced to find a cut-rate retirement spot after having lost their nest egg by investing in their daughter’s failed business. It soon becomes clear that while each is at the end of his or her life, they are all, without necessarily knowing it, at the start of an unexpected adventure. “I liked the idea of wrestling with that one—the idea that some people, at a certain stage in their lives, start looking for something new, something sustaining or truthful or something to make sense of their lives,” Wilkinson told The Huffington Post about what drew him to the story. In a masterful turn, Wilkinson conveys simultaneously the promise of adventure and the sadness of an ending. Among the various stories told in the film, the Christian Science Monitor’s Peter Rainer suggests that “best of all is Wilkinson's performance as the magistrate who, we quickly learn, is returning after 40 years to the India he spent his privileged childhood in…Entranced once again by India's glorious all-consuming bustle, Graham goes about his mission with single-minded verve. But there is also a sense of loss, of leave-taking, in his pursuit. The melancholy vicissitudes of age and regret are imprinted upon him. Wilkinson accomplishes all this without the slightest trace of special pleading.”