The Depth of an Actor

In Pawn Sacrifice, Tobey Maguire plays Bobby Fischer, the brilliant chess player whose genius made him the first American to become a world champion chess player and then pushed him into darkness that would consume him in later life. Critics are quick to praise, as the Hollywood Reporter does, how Maguire “impressively channels the chessman’s erratic gestures and penetrating gaze.” But even more, Maguire captures Fischer’s complex psychologically persona: on the one hand, a genius teetering on the narrow edge of insanity; on the other, a young man hungry to find his place in the world. Starting as a child actor with an adult’s sense of purpose, Maguire has matured into a serious actor who often finds the inner child in his adult character. We look at five seminal roles that shed light on his Maguire’s own process and genius. 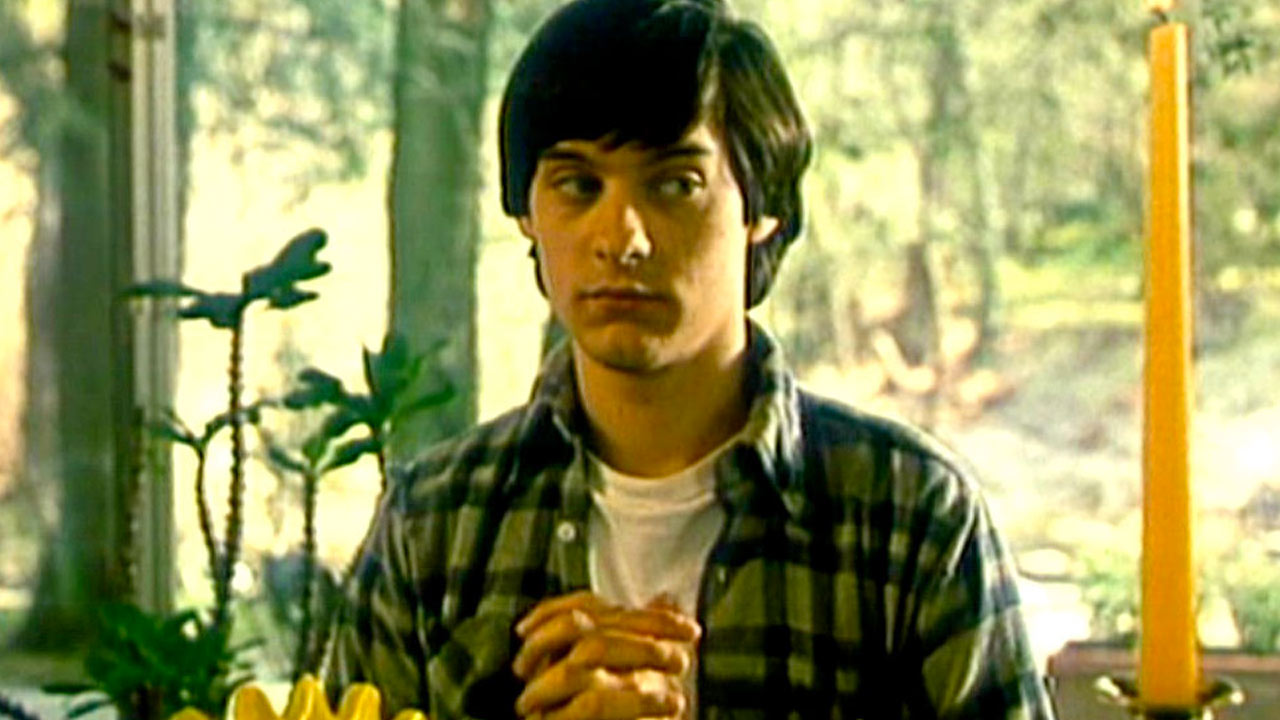 In Ang Lee’s The Ice Storm, a young Tobey Maguire showed the world for the first time what made him special. For the film’s producer and screenwriter James Schamus, Maguire reminded him of legendary actors, like Al Pacino and Dustin Hoffman, from a generation before. “First and foremost, they were actors,” Schamus observed. “They gained fame by doing their own thing. Tobey will become a star because he is who he is." Maguire, who grew up in Southern California and started acting at an early age, picked up small parts before landing the lead in the short-lived FOX sitcom Great Scott! But few of these roles highlighted the remarkable mix of gravity and innocence that Maguire would muster in future films. As The Ice Storm’s Paul Hood, a prep-school teenager returning home to New Canaan, Connecticut on Thanksgiving week in 1973, Maguire serves as the film’s cool-eyed, comic book-obsessed narrator. Adapted from Rick Moody’s novel about a group of dysfunctional families whose lives have become socially, psychologically and sexually knotted together, The Ice Storm hosts a remarkable cast, including Kevin Kline, Sigourney Weaver, Christina Ricci, Joan Allen and Elijah Wood. Among such talent, Maguire had a complex part, requiring him to be both inside the drama and observing the film’s action, a role for which Variety’s Todd McCarthy praises him as “impressing as a smart kid who shows signs of being able to cope nicely with adolescent turmoil.” Lee and Schamus found Maguire’s performance so powerful and persuasive that they soon afterwards cast him to star in their neo-western Ride with the Devil. 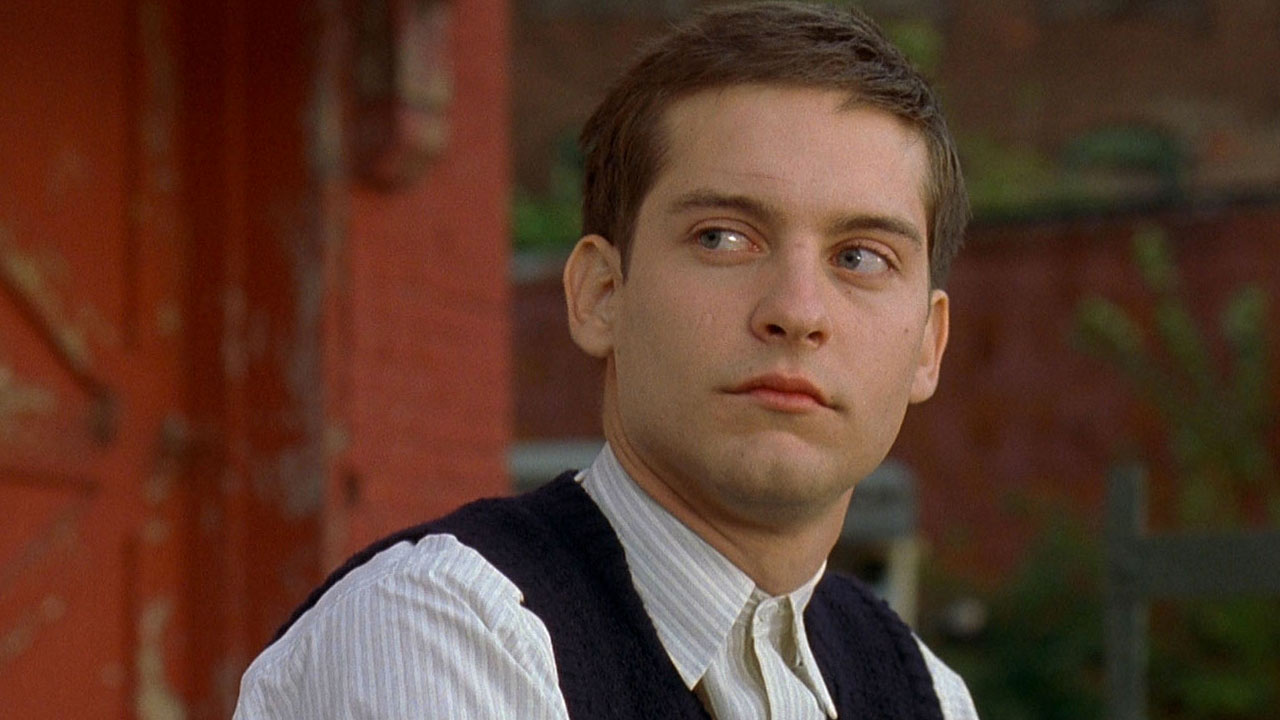 The Cider House Rules
The Heart of a Story

For Lasse Hallström’s 1999 adaptation of John Irving’s novel The Cider Houser Rules, Maguire not only starred in but became the emotional center of the multilayered saga. Maguire beat out Leonardo DiCaprio, Ethan Hawke, James Franco, and Matt Damon for the part of Homer Wells, the open-hearted orphan whose journey from ward to guardian shapes the story. Trained by Michael Caine (who won an Oscar for Best Supporting Actor for his part) to deliver medical care to abandoned children in his 1940s orphanage, Homer, however, refuses to assist the doctor in his abortions. At once naïve and wise, filled with the promise of adventure and resigned to fate, Homer follows one of the doctor’s abortion patients, Candy Kendall (Charlize Theron), and her boyfriend (Paul Rudd) to live at an apple farm far away from the orphanage. But when the world outside proves too much, Homer returns to take over the institution from which he had so long tried to escape. Moving from being an orphan to the guardian of place, Maguire anchors the film’s emotional arc. For John Irving (who won an Oscar for adapting his own novel), Maguire’s performance is “responsible for the success of The Cider House Rules.… He makes a very subtle change from boyhood to manhood.” But even more, this transition informs everything – and everyone – else in the film. For Salon’s Stephanie Zacharek, “Maguire’s delicately shaded performance has an extraordinary number of layers, and it sits right at the heart of The Cider House Rules. And somehow, every other performance in the movie falls beautifully into place around it.” 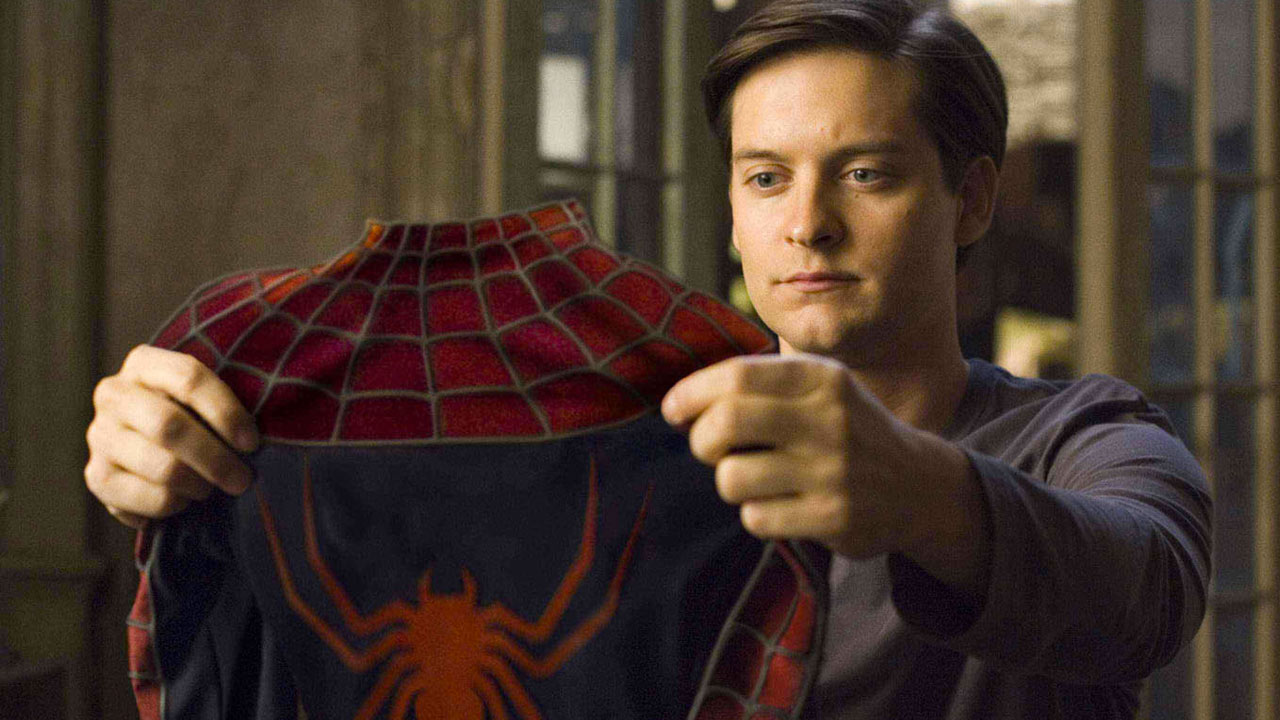 For many comic-book fans, the power of Spider-Man, the hero created by Stan Lee, Steve Ditko and Jack Kirby in 1962, is his extraordinary ordinariness. Sure, that spider’s radioactive bite gave Peter Parker amazing abilities to weave webs and climb buildings, but at his heart Parker is just a high-school orphan being raised by his uncle and aunt and yearning to have Mary Jane Watson notice him. This was the surprising reality that Tobey Maguire captured when he slipped into the superhero’s red tights for the 2002 Spider-Man film. After being in development for nearly 25 years, with various directors, writers, and potential actors (Leonardo DiCaprio, Edward Furlong, Freddie Prinze, Jr., Wes Bentley, and Heath Ledger, to name a few), the beloved comic book-turned-movie landed in the steady hands of Sam Raimi, who cast Maguire as the film’s hero. Maguire admitted at the time, “I know that some people think I'm not exciting enough or volatile enough for this kind of role,” but, as Maguire added, "Peter Parker is not a typical action hero. He's probably the most down-to-earth, most carefully drawn, and least plastic of comic book figures.” And when the film was released, the fears of Spider-Man’s fans turned to praise. The New York Times called it “inspired casting,” and Rolling Stone’s Peter Travers noted, “Maguire's substantial accomplishment isn't acrobatic; he builds a real character out of the sketch that is Peter Parker, an orphan from Queens, New York.” And audiences agreed. Spider-Man became the most successful film based on a comic book and the first film to reach $100 million in its first weekend. 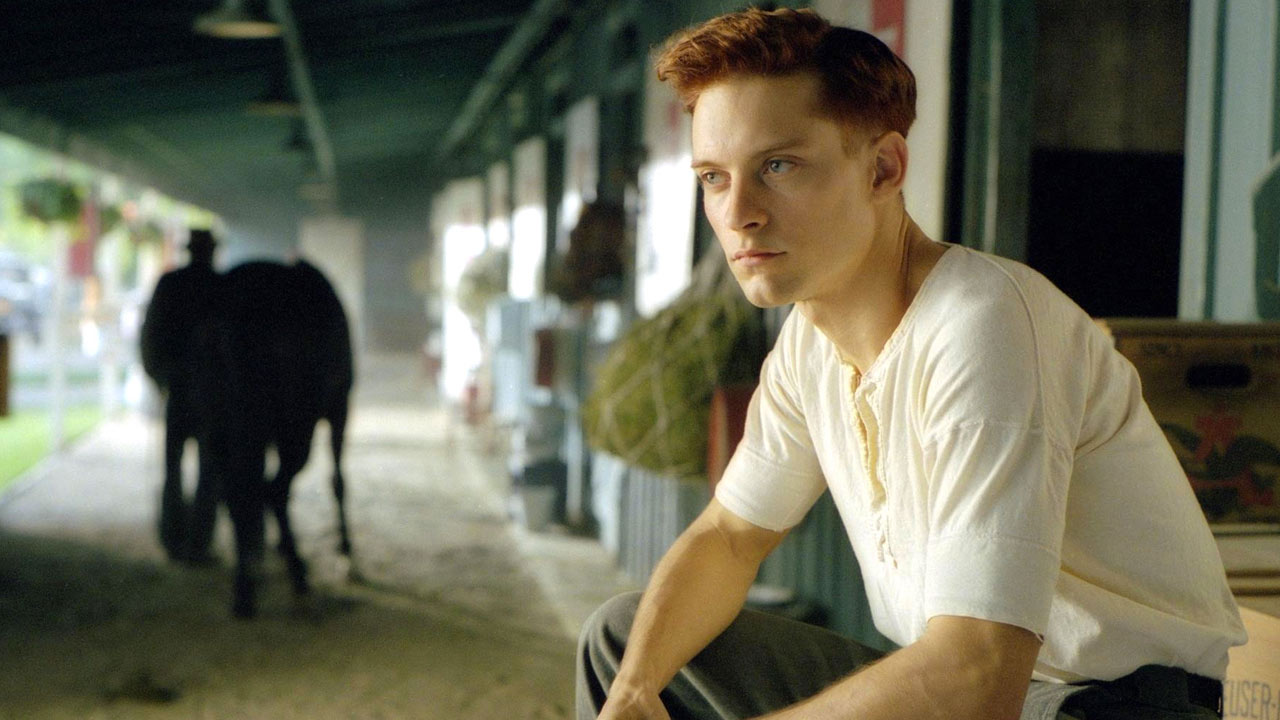 When Gary Ross cast his 2003 sports docudrama Seabiscuit, he knew from the start he wanted Tobey Maguire. Having worked with him on his innovative comedy Pleasantville, Ross knew first-hand that Maguire’s range and emotional presence were perfect to bring Laura Hillenbrand’s book Seabiscuit: An American Legend to life. Maguire was cast as Red Pollard, the street tough, emotionally shutdown jockey who learns to open up by working with the famed racehorse. For the characters in the film, as well as for most of America at the time, Seabiscuit was much more than a horse. A runt of a stallion that upended everyone’s expectations to become the American Horse of the Year for 1938, Seabiscuit was a powerful symbol of hope for people during the Great Depression. As Maguire’s character confesses, “You know, everyone thinks that we found this broken down horse and fixed him, but we didn't. He fixed us. Every one of us.” For the role, Maguire, who’d bulked up for Spider-Man, had to get slim and compact and have his hair dyed red. For Newsweek’s David Ansen, “Maguire achieves a remarkable physical transformation: with his wavy red hair, rangy body and hollowed eyes, he's shape-shifted into a figure who wouldn't be out of place in a Dorothea Lange Dust Bowl photograph.” Even more, Maguire’s character seems to connect directly with the film’s equine hero. As the New Yorker’s David Denby points out, “Maguire is the Seabiscuit of movie stars—he seems to lack the physical equipment for the job, but don’t make the mistake of underestimating him. His Red Pollard is a tough, strong performance. The adolescent softness has gone out of Maguire; he makes Pollard a tense, willful spark plug eager to take punishment.” 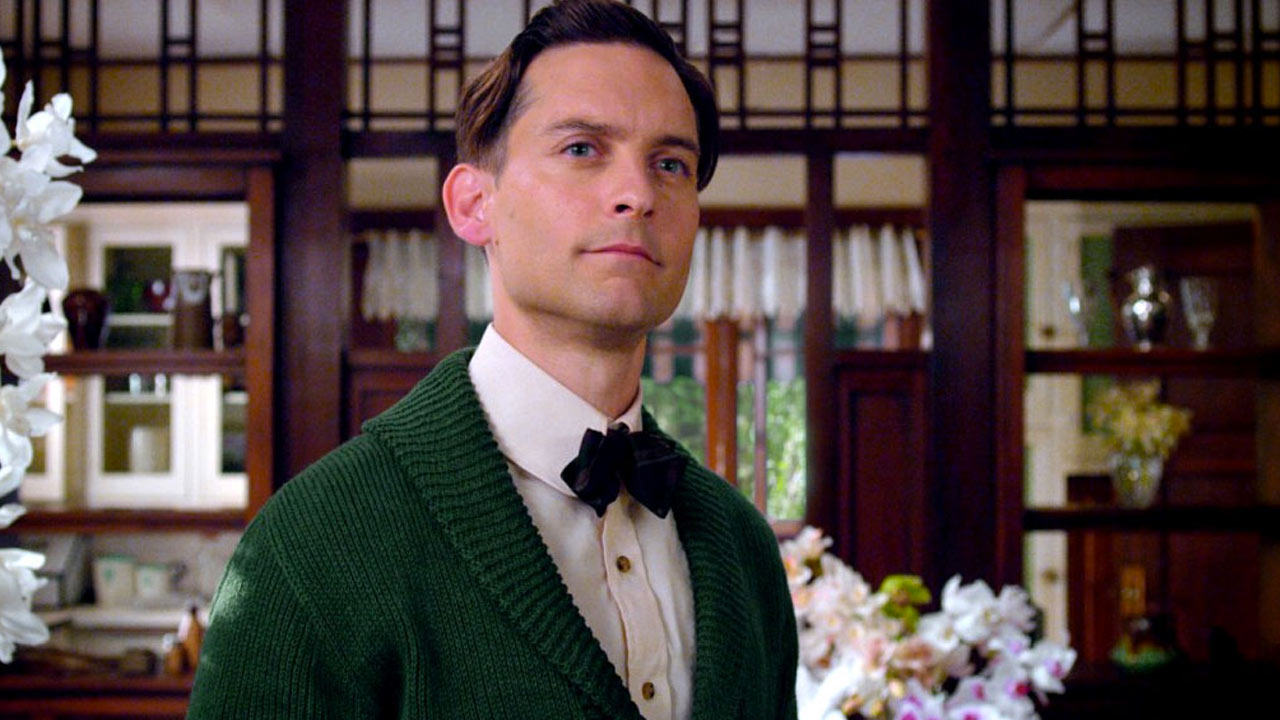 The Great Gatsby
The Center of the Storm

In Baz Luhrmann’s dazzlingly dizzy adaptation of F. Scott Fitzgerald’s 1925 novel The Great Gatsby, Tobey Maguire plays Nick Carraway, the unassuming narrator of the story. In the film (and novel), Nick, not Gatsby, recounts the events that unfold in West Egg in the summer of 1922, from the time he meets the charismatic Jay Gatsby (Leonardo DiCaprio), to watching Gatsby woo Daisy Buchanan (Carey Mulligan), to the terrible, inevitable actions that crash together at the story’s end. In a film that is so much about reflection and memory, Maguire’s character echoes back to his own life in the 1990s, when he and DiCaprio were young buds tearing up New York city at night, and Maguire broke out in The Ice Storm as the cool narrator of a complex emotional story. As Time’s Richard Corliss describes him in his rave review of the film, “Maguire’s otherworldly coolness suits the observer drawn into a story he might prefer only to watch.” Our faith in Maguire, the actor, makes him perfect for the person we want to watch as the observer. As The Movie Report’s Michael Dequina explains, “Maguire has built his entire career on playing everyman types, and that still-intact quality serves the film well, being the audience surrogate entryway into this world and all its attendant drama.”