In DENIAL, Timothy Spall plays David Irving, the controversial historian who charges Deborah E. Lipstadt (Rachel Weisz) with libel after she names him as a Holocaust denier. Suing the Atlanta-based Lipstadt in a British court where libel laws heavily favor the plaintiff, Irving gains an immediate advantage in a case that on its face might seem absurd––making Lipstadt prove the Holocaust occurred. With her legal team, headed up by solicitor Anthony Julius (Andrew Scott) and barrister Richard Rampton (Tom Wilkinson), Lipstadt faces Irving down in a case that puts the truth of the Holocaust on trial. To recapture the psychology of the original trial, Wilkinson and his team refused to acknowledge Spall, let alone speak to him, during rehearsals. “Over that week and a half, I did start to feel a bit lonely,” Spall confides. “It wasn’t that the other actors wouldn’t talk to me between scenes. I started to shut myself away. I wouldn’t chat with anyone. I’d sit on my own in a room that had the windows blacked out. I’d be all alone in that court and I felt isolated. Somehow it seemed right. David Irving fought that case alone.” In addition to dealing with his character’s alienation, Spall had to confront the very alienating nature of Irving himself. “Obviously Irving is the antagonist in this story,” Spall notes. “In my career, I have often played people who are on the outside and I don’t mind that. However wrong-headed the characters I play may seem, I feel it’s my job to understand the person, even if they seem to fly in the face of accepted wisdom.” For producer Gary Foster, “Tim plays Irving so convincingly you almost feel sorry for the character. Only a great actor could do that.” For nearly 40 years, Spall has excelled in making the characters he plays both fascinating and understandable, from the most repulsive to the most revered. We look at five memorable performances that make Timothy Spall an actor we love. 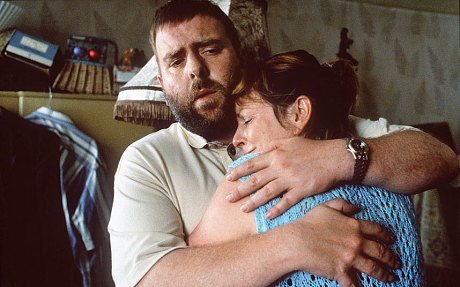 Although Timothy Spall first worked with Mike Leigh in the 1990 film Life is Sweet, his performance in Leigh’s 1996 Secret & Lies showcased for many his remarkable emotional range. As with most of Leigh’s films, the actors worked with the director to workshop the story and their characters until they have a fully developed story to film. In Secrets and Lies, Leigh and his actors explore the complex issue of identity and race through an adoption melodrama. After her adoptive parents die, Hortense Cumberbatch (Marianne Jean-Baptiste), a successful black woman, decides to locate her birth mother. The mother she finds, a poor, working-class woman named Cynthia Rose Purley (Brenda Blethyn), is not at all what she expects, just as Purley is shocked to discover she has a black daughter. Spall plays Purley’s brother, a modestly successful photographer, who not only keeps his sister afloat financially but finds himself providing emotional balance when Purley and her daughter, Roxanne (Claire Rushbrook), come to terms with having a black relative who’s also more affluent than they are. Spall describes Secrets and Lies as “a kind of celebration of getting through misery with dignity.” For The New York Times’ Janet Maslin, Spall’s character provides that dignity, making Maurice “so solid and decent that it comes as no surprise when he emerges as this film's voice of reason.” 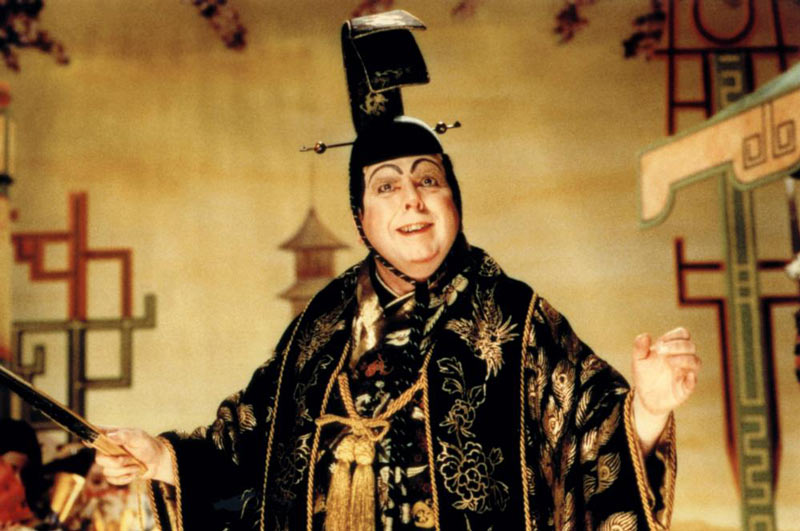 Timothy Spall reteamed with Mike Leigh for his 1999 period piece, Topsy-Turvy, which dramatizes the creation of Gilbert and Sullivan’s 1885 comic opera The Mikado. While the story’s focus is the emotionally fraught collaboration between the composer, Sir Arthur Sullivan (Allan Corduner), and the dramatist, W.S. Gilbert (Jim Broadbent), its grander theme is, as New Times’s Gregory Weinkauf suggests, “the magic of performance and the foibles of the artists behind it.” In many ways, the film, cast with so many of Leigh’s regular actors, feels like a commentary on the cinematic practice that produced it as much as on the Victorian opera that is its subject. Foremost among this brilliant cast of eccentrics is Timothy Spall playing Richard Temple, the booming bass-baritone who was the star of so many Gilbert and Sullivan operas. Spall’s Temple captures both the exterior exuberance and emotional insecurity of performers in general. For Entertainment Weekly’s Lisa Schwarzbaum, “Beneath the florid thespian posturing of the character actor who plays the title role (the indispensable Timothy Spall) is a dedicated artist heartbroken when Gilbert cuts one of his songs.” 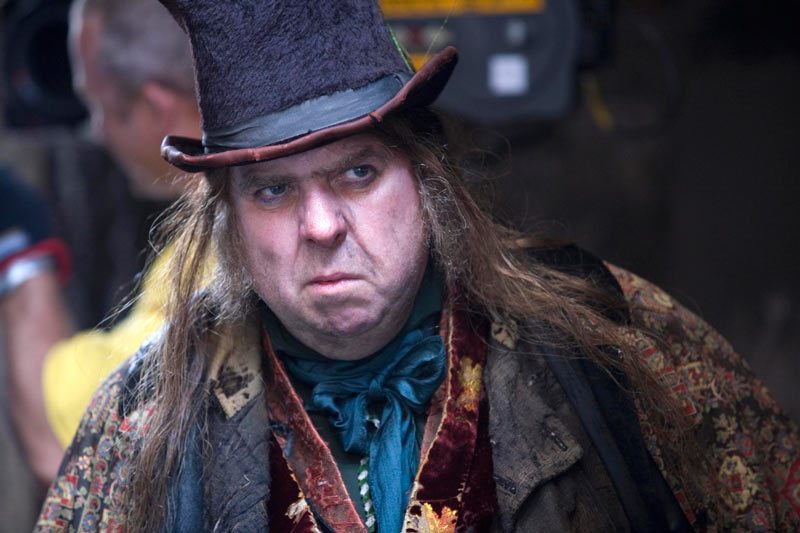 Nicholas Nickleby and Oliver Twist | The World of Dickens

Perhaps no writer is better suited for Timothy Spall’s unique talents than Charles Dickens. Spall, who’s played four of the novelist’s creations on film, television, and radio, notes that “they don't feel like Dickensian characters to me. They feel like real characters. They feel like real people." In 1980, Spall played the large, loutish young Wackford Squeers in the Royal Shakespeare Company’s 8 ½ epic theatrical production, The Life and Adventures of Nicholas Nickleby.In2002, Spall returned to the same novel in a different character. In Douglas McGrath’s comic film, Nicholas Nickleby, Spall embodies Dickens’ genial side, playing the lovable, kind-hearted lawyer, Charles Cheeryble, among an all-star cast featuring Nathan Lane, Jim Broadbent, Christopher Plummer, and Charlie Hunnam. For the 2007 Masterpiece Theatre television production of Oliver Twist, Spall embodied a very different character again as Fagin. Always attentive to find his character’s humanity, Spall crafted a new backstory to show the classic villain in a new light. “He’s vile and sewer-like but he’s not a rat,” explains Spall to The Independent. “He’s someone who’s got a sense of himself, the beggar king. I like to think he’s from some part of Europe where there was a Jewish ghetto and he got thrown out during one of those pogroms.” For many critics, Spall’s unique take gave one of Dicken’s most famous figures a new lease on life. “Spall, a naturally corpulent fellow, oozes his way through the complexities of Fagin's character, adapting a trace of a continental accent to further mark him as an outsider among the outcasts of the teeming London street,” notes The San Francisco Chronicle’s David Wiegand. “Spall's is not only a great performance, but one that grounds the entire glorious film.” 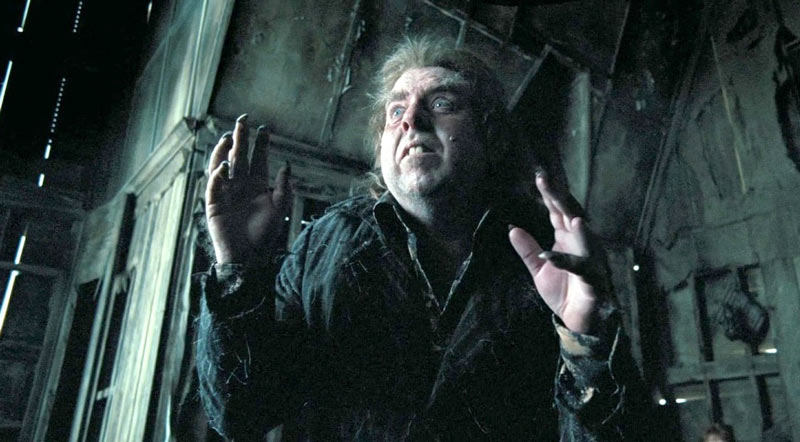 In 2004, Timothy Spall joined the Harry Potter series when he appeared in the second installment, the 2004 Harry Potter and the Prisoner of Azkaban. While his character, Peter Pettigrew, is referenced through the film, Spall’s sudden manifestation of Pettigrew (and his alter ego Wormtail) shocked and delighted fans and critics.“Who would have guessed that Timothy Spall would have been perfect as the sniveling Peter Pettigrew?” exclaims We Got This Covered’s Will Chadwick. And The New York Times’ A.O. Scott notes, “There is also a late, marvelously repellent appearance by Timothy Spall, but to say too much about it would risk spoiling a nice surprise and compromising some of Ms. Rowling's––and Mr. Cuarón’s––devilish magic.” But what is not a surprise is how well Spall fit into the remarkable class of British actors, includingRichard Harris, Michael Gambon, Julie Walters, Ralph Fiennes, Alan Rickman, Maggie Smith, Emma Thompson, Gary Oldman, and Helena Bonham Carter, that showed up at Hogwarts. Appearing in nearly all of the subsequent Harry Potter films, Spall got to be part of a cultural phenomenon that defined a generation. On the red carpet for the series’ final bow, Harry Potter and the Deathly Hallows, Part 2, Spall commented, “There’s a devotion here and a whole generation of people and kids that this means a lot to. To be part of something that is about magic and people having a good time, and sometimes getting people to read, is a great thing.”

Mr. Turner | Portrait of an Artist 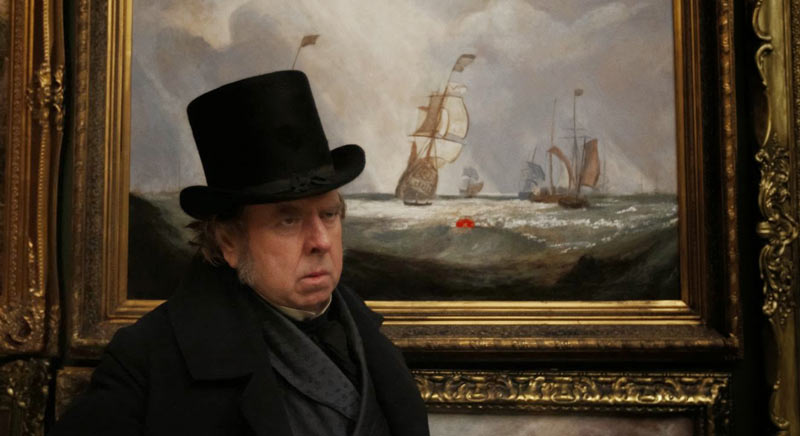 In 2014, Timothy Spall appeared in the title role of his longtime collaborator Mike Leigh’s Mr. Turner, a moving portrait of the last 25 years of the 19th century painter J. M. W. Turner. Three years before production started, Leigh gave Spall his first note: “I want you to start learning how to paint.” Spall, who immediately enrolled in an art class, explains to IndieWire, “Mike wanted it to look like I’ve been holding a brush since I was two.” But such mimicry was only the first step in Spall transforming into the coarse, cantankerous, even cruel, artist whose sublime, atmospheric oil paintings changed art history. Focusing mostly on his time at the seaside town of Margate, the film episodically touches on his complicated personal relationships, from his unflagging allegiance to his father (Paul Jesson), his violent dismissal of the mother of his children (Ruth Sheen), and his uncomfortable sexual liaisons with his housekeeper (Dorothy Atkinson). But more than anything, it captures Turner’s will to create. As Turner, Spall deployed a unique vocabulary of grunts and groans to capture the painter’s less-than-verbal communication style. In explaining how his gruff tone spoke to Turner’s spirit, Spall tells The Guardian, “He has so much to say, it's burning inside him––and it comes out as a little imploded grunt." For The New York Times’ A.O. Scott, “Turner, played with blunt, brutish, grunting delicacy by Timothy Spall, is both a genius and an ordinary man, with the usual emotions and appetites.” In The Guardian, Leigh explains that these contradictions were at the heart of a “film examining the tension between this very mortal, flawed individual, and the epic work, the spiritual way he had of distilling the world." For The Telegraph’s Robbie Collins, it is that contradiction that makes Spall’s performance so moving: “Beyond the troughfuls of fun tics, Spall makes Turner tenderly and totally human, which has the effect of making his artistic talents seem even more God-given.” In addition to the film’s many nominations and awards, the New York Film Critics Circle Awards and Cannes Film Festival honored Spall with Best Actor.