In Ed Zwick’s PAWN SACRIFICE, Liev Schreiber plays Borris Spassky, the stony-faced Soviet chess master who would become Bobby Fischer’s nemesis. To play Spassky, an enigmatic genius about whom little is known, Schreiber had to craft an implosive personality that emanates brilliance and power while letting little emotion escape. Schreiber’s performance, especially next to Tobey Maguire’s emotionally volatile Bobby Fischer, serves as a perfect balance and counterpoint. For The Hollywood Reporter’s review Jordan Mintzer, “Schreiber is terrific as the reigning Soviet heavyweight, containing all emotion while showing that he’s man enough to respect his competitor, not to mention admire the American way of life.” Schreiber’s turn captures so much of what people admire about the actor. While verbally nimble enough to be one of our finest Shakespearian actors, Schreiber often allows his character’s intelligence and emotion to be conveyed by the sheer weight and presence of his performance. 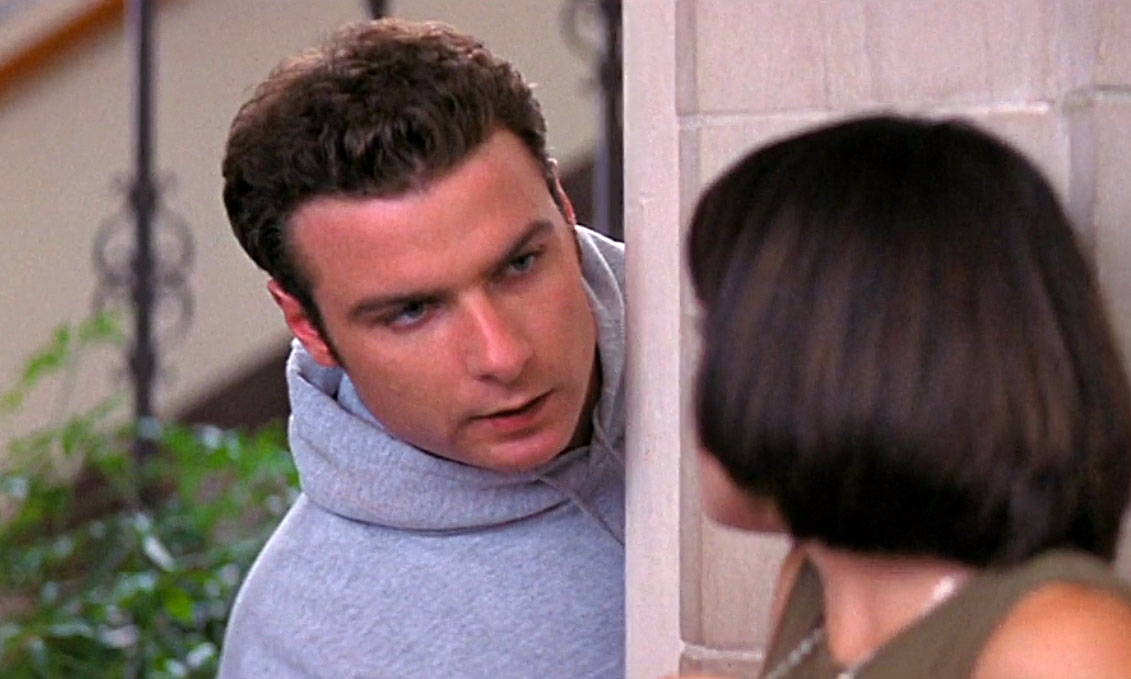 For the 29-year-old Liev Schreiber, 1996 proved to be a watershed year. In addition to parts in critically acclaimed independent films, like Walking and Talking and Big Night, Schreiber got a cameo in the 1996 Scream. “It was an auspicious beginning for me," Schreiber told The Shortlist. “Bob Weinstein, who was a theatre fan, called me into his office. He said he wanted me to do this thing for him. I’m $70,000 in debt from student loans, and I’m looking for a job wherever I can get it. He says all he wants me to do is walk down some stairs and get into a police car. Twenty seconds. Twenty grand. I was like, ‘I’m yours,’” That 20 seconds would turn into four years and two sequels, as Schreiber returned for Scream 2(1997) and Scream 3(2000). In the first Scream, Sidney Prescott (Neve Campbell) must face the one-year anniversary of her mother’s murder by Cotton Weary (Liev Schreiber) when a series of new murders terrorizes the citizens of the small town of Woodsboro. After the stabbings stop, Schreiber’s character is cleared of the murder charge, thus clearing his way to join (still living) cast members for Scream 2. In the sequel, the exonerated Weary (Schreiber) is a minor celebrity at Windsor College, where Sidney is a student, and a new cycle of murders occur. By Scream 3, Schreiber, while grateful, was ready to die: “I just thought it would be fun to get covered in the blood and all that stuff.” The writers gave him his wish.Scream 3 starts with Cotton Weary, now the host of the popular TV show 100% Cotton, being quickly killed off when he refuses to give Sidney’s address to the newest version of the iconic Scream killer Ghostface. 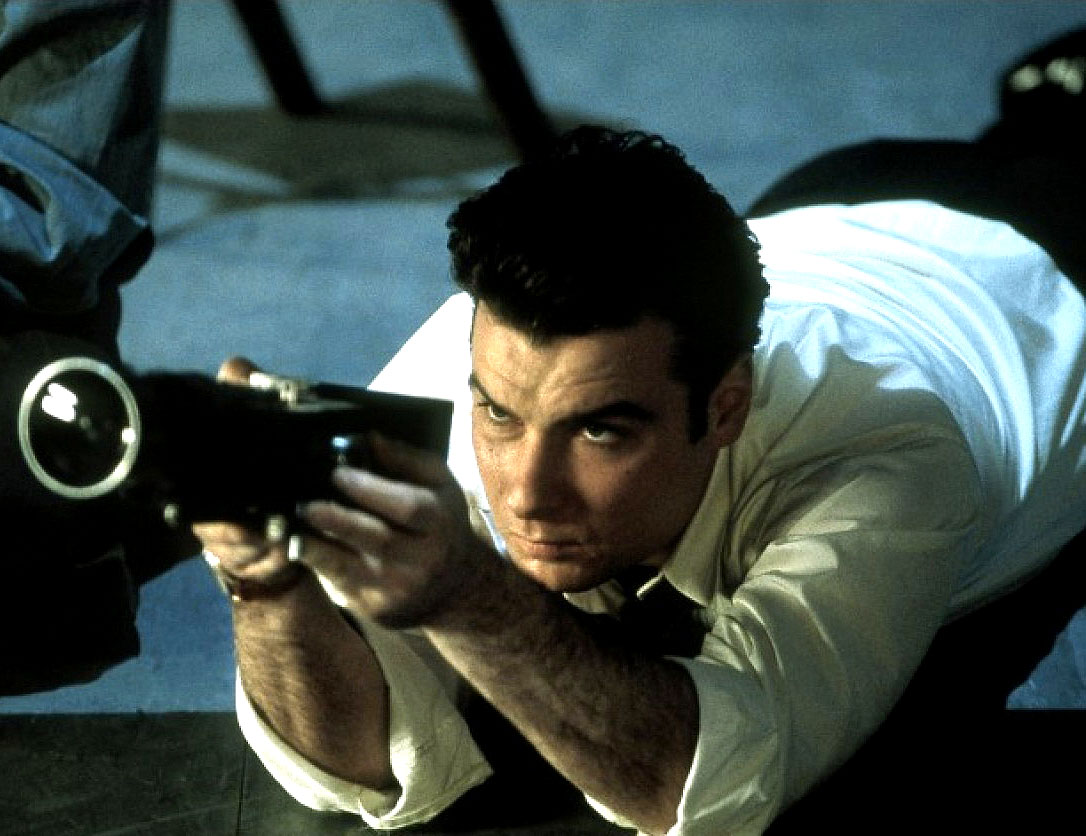 For Benjamin Ross’s docu-drama RKO 281, the story of wunderkind Orson Welles’ fight with William Randolph Hearst to make the now cinema classic Citizen Kane, Liev Schreiber was cast as Welles, a figure who is the very epitome of genius. The film, which was partially based on the PBS documentary ''The Battle Over Citizen Kane,'' had meticulously researched the real-life struggle. For the dramatic film, Schreiber had to find the emotional truth, a job that made him more than a little nervous. “It seemed so sacrilegious to play him. But I had a job, I'm an actor, and that's what I do for a living,” Schreiber explained to the A.V. Club. “So I had to figure out what I was going to do to him.” What Schreiber did was bring the full measure of Welles’ genius, including all his power and pettiness, into his performance. As Variety’s Laura Fries noted “Schreiber, as Welles, manages to capture the essence of a man of many passions, and creates a nice balance of hubris and self-loathing to give the part real depth.” And Hollywood noticed. Schreiber received both a Golden Globe and Emmy nomination for his performance. 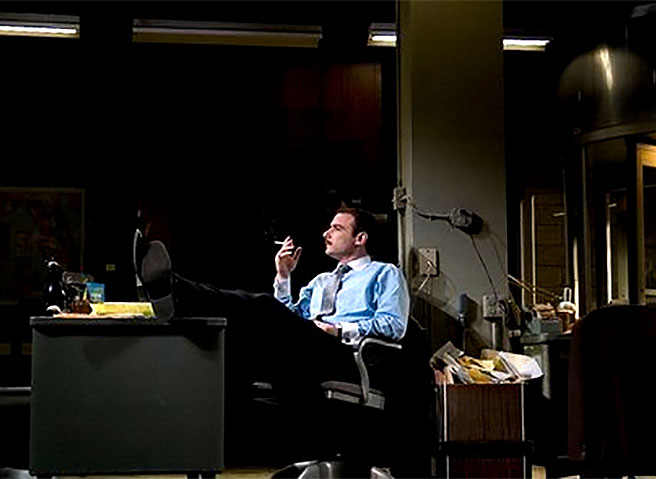 When Liev Schreiber won a Tony in 2005 for starring in the revival of David Mamet’s carnivorous real estate drama Glengarry Glen Ross, many critics were quick to point out that his award-winning turn was only the latest in a series of prize-worthy performances. “As for the brilliant Mr. Schreiber, who plays the preening master salesman of the moment, it seems he can conquer pretty much any style of theater,” wrote New York Times critic Ben Brantley. “Having shone in Pinter, Shakespeare and LaBute, he now reinvents the Mamet pitchmeister.” For decades New York theatergoers have had the privilege of seeing Schreiber revive (and often revise) classic theater characters. What made Schreiber so special and innovative as an actor was partially unveiled in John Lahr’s glowing 1999 profile of the actor on the occasion of him playing Hamlet at New York’s Public Theater. Among the various people who show up in Lahr’s piece to applaud Schreiber’s talent, Dustin Hoffman is perhaps the most clear, pinpointing that Schreiber “has a kind of wisdom about human contradictions that is beyond his years.” 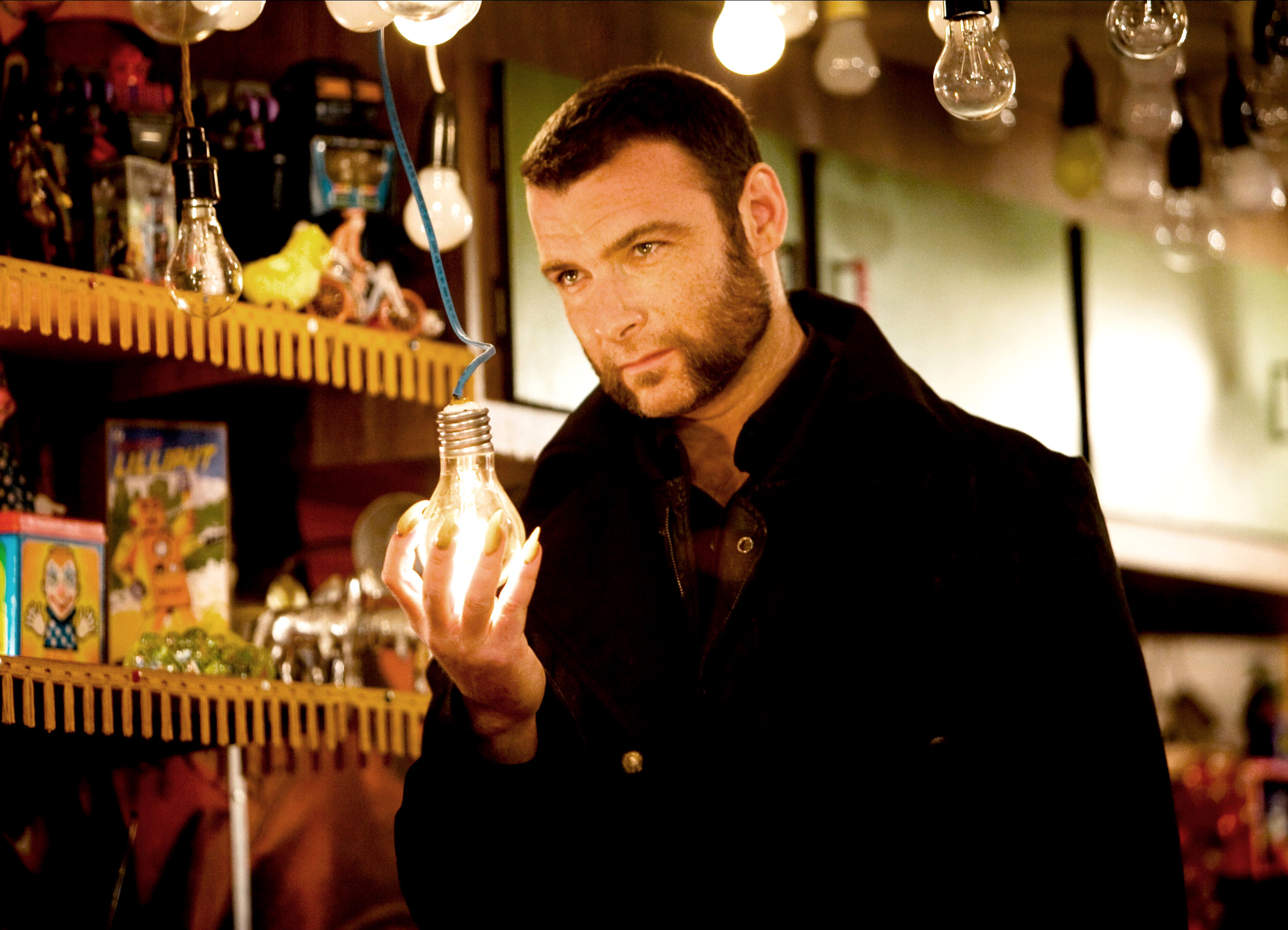 By 2009, Schreiber was perhaps better known for playing Shakespeare than superheroes, but he leapt at the chance to be in X-Men Origins: Wolverine. As the 4th installment of the X-Men franchise, the film unveils the back-story of Wolverine (Hugh Jackman) from his 19th century Canadian origins to the formation of the X-Men. Crucial to that violent tale is the evolution of Schreiber’s character, Wolverine’s half-brother Victor Creed (aka Sabretooth). As a more instinctual, animalistic version of Wolverine, Sabretooth helps to define his sibling’s human side. For Schreiber, the lure of the story was its classic dramatic core: “Brother vs. brother. It's Cain and Able. It's Shakespeare. I was addicted to Wolverine when I was 13 because it was taboo. It was like, before Wolverine everything was men in tights, tall buildings. He was the introduction of the anti-hero.” Jackman, who’d worked with Schreiber before, pushed for him to play his alter-ego, if only because he suspected their competitive spirit would inspire their animal instincts to come out on screen. Jackman’s assumption proved right as the two act together and battle each other beat for beat. “Both Jackman and co-star Liev Schreiber,” explains the Los Angles Times’ Kenneth Turan, “are fine actors who throw themselves into whatever they take on, whether it be Chekhov or comic books.” 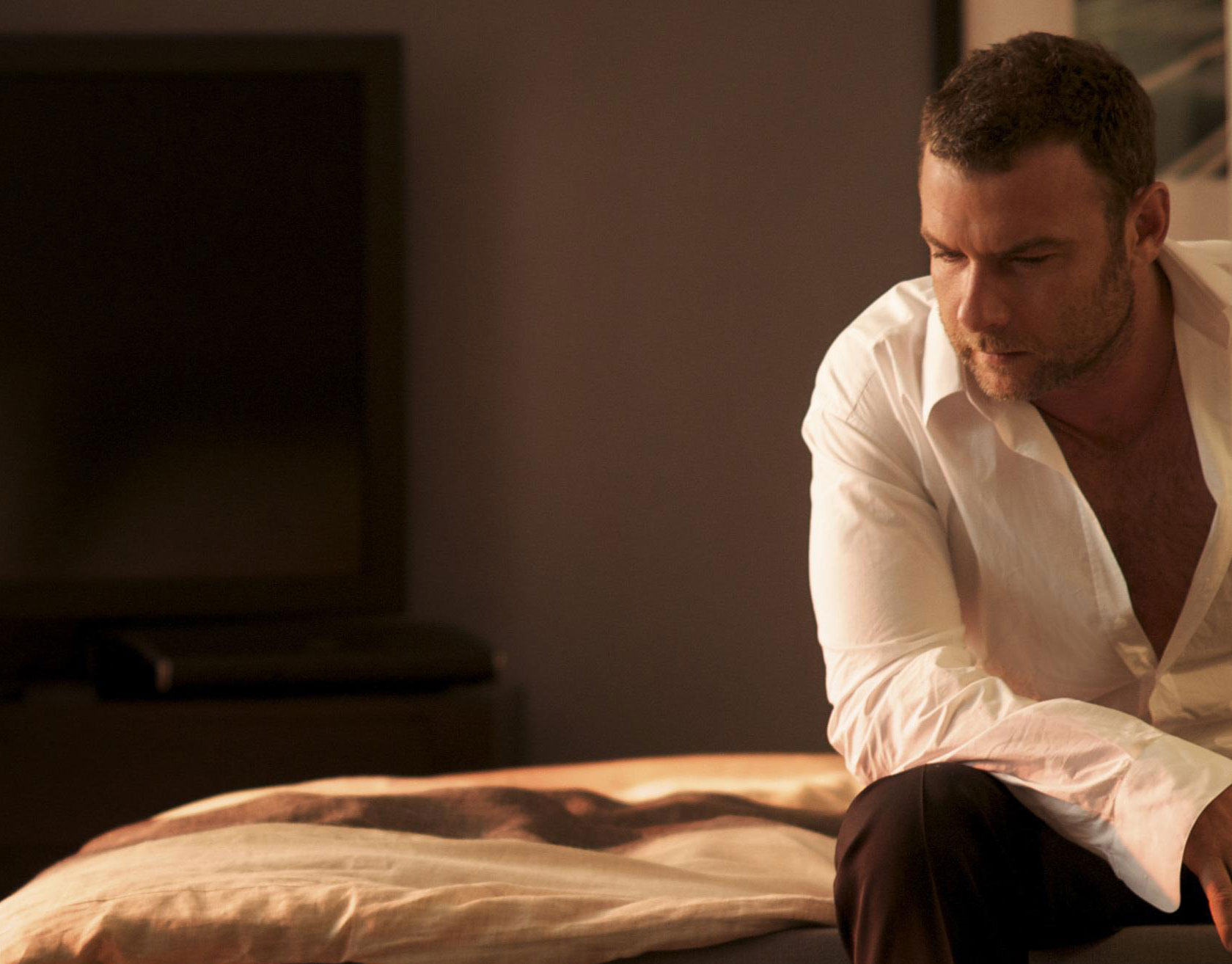 Ray Donovan
The Duality of Drama

In 2013, Liev Schreiber showcased his talent for exposing all the layers of a complex character in Ray Donovan, Showtime’s series about a tough and taciturn Hollywood fixer. “I think conflicted characters are always more interesting,” Schreiber told Vanity Fair. “In all great dramatic literature, it is the duality that makes something work.” In Ray Donovan, that duality is drawn between the kind of man he is and the kind of work he does. On the one hand, Donavan is a family man who has, according to Schreiber, “a strong moral epicenter.” He takes care of his family, watches out for people in need, and seeks to right wrongs. On the other hand, as a fixer, Donovan is continually skirting, if not breaking, the law to bribe, cajole, threaten or do whatever else it takes to solve his clients’ problems. For the Philadelphia Inquirer’s David Hiltbrand, “The bullet-headed Schreiber is outstanding as a modern-day Philip Marlowe, wading resolutely into the moral cesspool of Los Angeles…Ray is ruthless, but Schreiber is able to subtly convey the man's softer side.”