From comic sidekick to spiritual mentor

In Matt Ross’ family drama CAPTAIN FANTASTIC, Kathryn Hahn plays Harper Cash, the younger sister of Ben (Viggo Mortensen), a woman emotionally connected to her exuberant brother, but much more traditional in her lifestyle. Married to Dave (Steve Zahn) with two sons who are more interested in video games and pranks than vegetable gardening and Plato, Hahn is a woman caught in the middle. While she wants to support her brother and his kids as they go through a personal tragedy, Hahn’s character also desires a certain distance. As much as she loves Ben, she worries that he might look down on her suburban values. It’s an emotional, complex part. Even as Hahn’s character provides a dramatic yardstick to show us how far Ben Cash has come, Harper is her own person, dealing with her own sense of identity. “Harper is not just a trope,” Hahn explains. “She’s a real human being who loves her brother and his family. She just wants them to be safe and happy.” As usual, Hahn brings a dramatic freshness and emotional depth to every supporting role she is cast in, making it not just a memorable character, but an essential element in understanding the story. From her comic roles in films, like We’re The Millers and the upcoming Bad Moms, to her more dramatic turns, Hahn leaves her unforgettable mark. 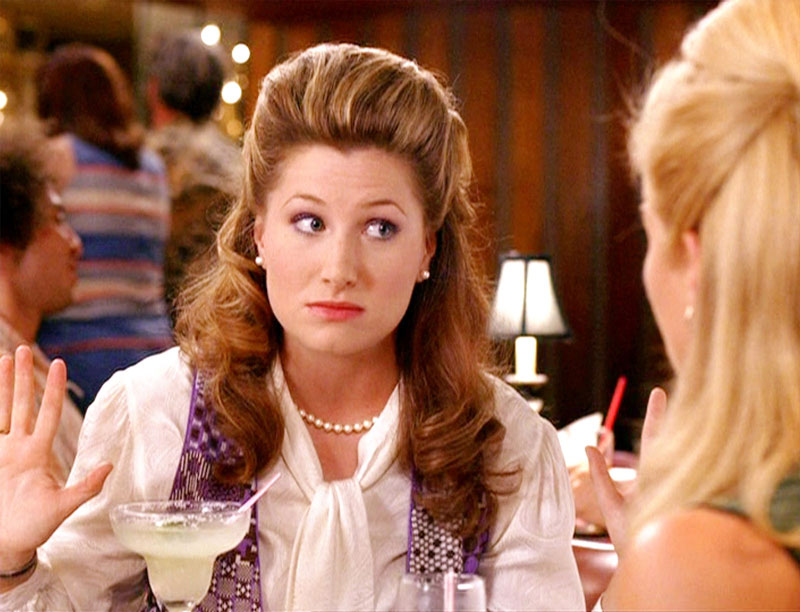 After starting off in theater in New York City, Kathryn Hahn quickly became Hollywood’s go-to girl for playing a best friend in film. From being Kate Hudson’s gal-pal in 2003’s How to Lose a Guy in 10 Days to a lovelorn bar waitress in 2004’s Win a Date with Tad Hamilton!, Hahn demonstrated a talent for creating immediately recognizable and relatable characters. In 2004, as the crazed staff member at KVWN in Anchorman: The Legend of Ron Burgundy, Hahn also discovered her talent for being funny. “I’ve never thought of myself as a comedic actress in any way,” she tells Vulture. “Anchorman kind of cracked that open.” In tracing her trajectory as a supporting performer, Hahn tells The Guardian, “I think I was the best friend first, then the randy crazy lady,” a character type that she took to hilarious new heights in films, like Step Brothers. In each role, she found a way to combine seemingly opposing forces for full comic effect. Playing Paul Rudd’s ex-girlfriend in Jesse Peretz’ 2011 indie comedy Our Idiot Brother, Hahn is, according to Entertainment Weekly’s Lisa Schwarzbaum, “hilarious as a pacifist feminist perpetually spoiling for a fight.” The next year in David Wain’s Wanderlust, alongside Rudd and Jennifer Aniston, “the reliably hilarious Kathryn Hahn has some great moments as a randomly furious ex-porn star turned jam-maker,” writes The Telegraph’s Tim Robey. Hahn has certainly expanded her repertoire beyond best friend. In the process, she has earned a richly deserved reputation for being able to make the most outrageous character believable as well as make the most stereotypical sidekick hilarious. 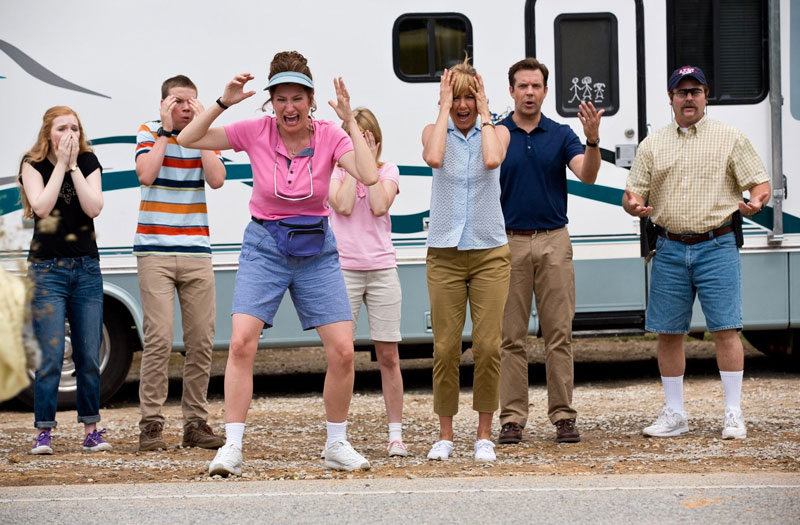 When it came to casting We’re The Millers, director Rawson Thurber knew how important getting the right chemistry between his characters would be to keeping his improbable set up both funny and believable. His high-concept road trip revolves around a low-level Denver pot dealer (Jason Sudeikis) who must construct an all-American family from a group of disreputable local figures in order to help him smuggle a shipment of marijuana out of Mexico. With Jennifer Aniston as a stripper turned mother, Emma Roberts, a petty thief runaway posing as the doting daughter, and Will Poulter, a baffled neighbor playing a loving son, the Millers travel cross country in a RV loaded with contraband. Along the way they befriend a real red-blooded Midwestern family played by Nick Offerman, Kathryn Hahn and their daughter Molly Quinn. Thurber had noticed Hahn before in Step Brothers, Adam McKay’s man-child comedy in which Hahn’s erotic fixation on John C. Reilly allows her, according to Time Out New York, to “walk away with the film’s most disturbed, brilliant scene.” Thurber left the theater feeling, as he later told The New York Times, that Hahn “was the most inspired, electric comedian I’d seen come on the scene in years.” The film, which went on to huge box-office success, brought Hahn even more critical acclaim. The Minnesota Star Tribune singled out Hahn as “brilliant as the stereotypical square small-town mother whose idea of ‘swinging’ is getting a handful of Aniston’s clothed breast.”

Bad Words | The Other Woman

In Jason Bateman’s naughty comedy Bad Words, Kathryn Hahn plays Jenny Widgeon, a reporter who sponsors Guy Trilby (Bateman), a bitter, adult man who wants to officially compete against kids in national spelling bees. Initially hoping to land a good story, Hahn’s character agrees to sponsor Trilby, finding out too late how really bad Trilby can be. Working with her friend Jason Bateman initially lured Hahn to the part. “I’ve had a talent crush on him for years,” Hahn explains. “Whatever he was putting his heart and his muscle behind was going to be something that I would want to see, let alone be in.” But Hahn had rarely been cast as something so staid as a leading lady. “In school, I never was the ingénue,” she tells The New York Observer. “I was always grandma or the guy…I would always rather have the makeup and hair people come in and mess it up a little bit more than make it neat.” For Hahn, “It was a creative turn-on” to redefine this traditional role. “I’d be his romantic interest…[but] this character was not your typical ‘leading lady’ in any way.” In the end, Hahn mirrors Bateman’s own unique demented style. “Hahn, matches Bateman in her ability to be funny without ever playing the laughs,” commends The San Francisco Chronicle’s Mick LaSalle. “She is especially funny in a couple of comic sex scenes, which contain a running gag that's one of the film's best.” 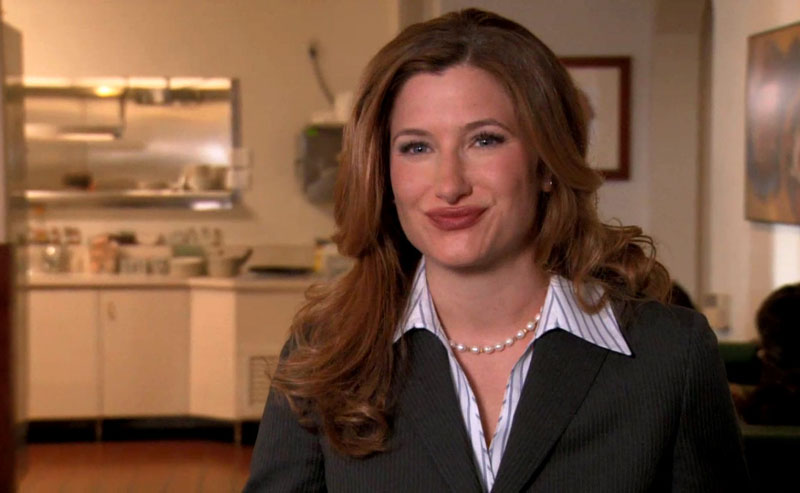 Although the creators of the talent-rich sitcom Parks and Recreationhad intended the character of political operative Jennifer Barley to have just a one-season narrative arc, Kathryn Hahn played her so well, they couldn’t help but bring her back. The comedy with Amy Poehler, Rashida Jones, Nick Offerman, Chris Pratt, and Adam Scott revolves around the personalities and politics of the parks department of the fictional town of Pawnee, Indiana. In season four, when Leslie Knope (Poehler) decides to run for City Council, she meets her political opponent, Bobby Newport (Paul Rudd), and his Machiavellian campaign manager, Jennifer Barkley (Hahn). As a consultant ready to cut any throat for a reasonable retainer, Hahn quickly became a fan favorite. For Slate’s L.V. Anderson, Hahn’s performance made Barkley “brilliant and conniving yet somehow enormously likeable.” Later that year, Hahn was nominated for Best Guest Performer in a Comedy Series by the Critics’ Choice Television Awards. Hahn’s unique style made Barkley one of SlashFilm’s favorite recurring characters on Parks and Recreation, pointing out that “she’d fit in on TV’s other best political comedy, Veep.” Indeed, the shows creators, realizing how much Hahn brought to the character, asked her back for the final season. “She’s doing what she always does—she bursts into the world of the show, throws a hand grenade that’s a combination of fear and opportunity, and then runs out the door before anyone can catch her,” executive producer Michael Schur jokes to Entertainment Weekly. 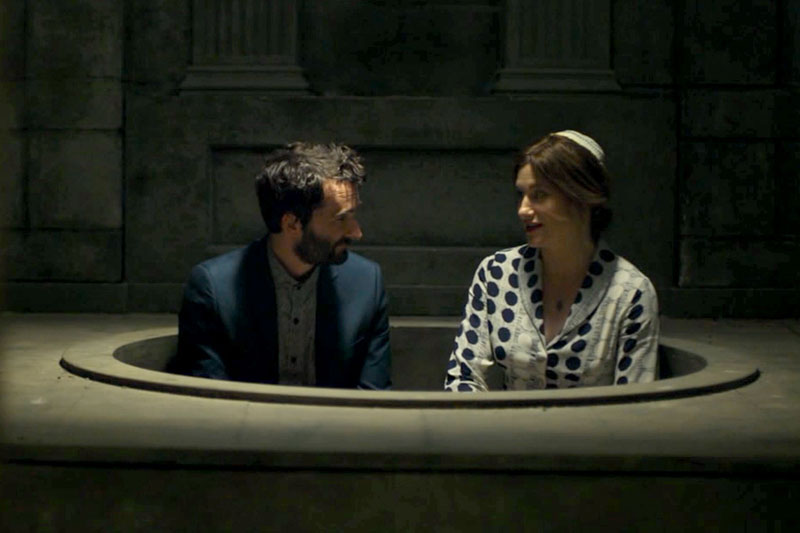 In the hit Amazon series Transparent, Kathryn Hahn plays Rabbi Raquel Fein, the level-headed religious leader who gets caught up in the Pfefferman family’s emotional whirlpool when she falls for the son, Josh (Jay Duplass). The series began by tracing out Maura’s (Jeffrey Tambor) gender transition, but it soon became clear that the rest of the family––from Josh (who goes from hound dog to expectant father) to his sisters, Sarah (Amy Landecker) and Ali (Gaby Hoffmann)––are all transitioning as well. For Hahn, the show marked a transition in the kind of roles she is cast to play. “I have, historically speaking, been asked to play the ‘unhinged one’ or ‘the one who’s searching or looking,’” Hahn tells Vulture’s Devon Ivie. “That’s been really satisfying, to just not be the hurricane, but the ground, the anchor.” As the Rabbi is called upon not only to live in, but also to make sense of, the hurricane of emotions spinning around the Pfeffermans, Hahn is divinely humane. As The Wrap’s Mark Peikert notes, Hahn, as part of “one of the great ensemble casts in television history,” quickly conveys “beatific joy better than anyone else on the planet.” Before casting her as the Rabbi, Transparent’s creator Jill Soloway picked Hahn to star in her 2013 feature film Afternoon Delight.Having seen her in a number of roles, Soloway was acutely aware of Hahn’s remarkable range. “She reminded me of Ellen Burstyn, Meryl Streep, or Dianne Wiest—flawed heroines who let their humanity come through,” Soloway tells The New York Observer. “At its center, the movie is about the notion of the divided feminine—that inside every woman is many women.” Going from comic sidekick to spiritual center, Hahn has indeed captured the full range of female experiences.