Deadline.com has released an official statement from Kirk Douglas regarding Bleecker Street's TRUMBO. In the statement Mr. Douglas states: 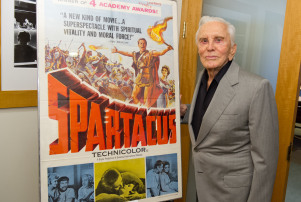 I am so proud of my fellow actors who use their public influence to speak out against injustice. At 98 years old, I have learned one lesson from history: It very often repeats itself. I hope that Trumbo, a fine film, will remind all of us that the Blacklist was a terrible time in our country, but that we must learn from it so that it will never happen again.

Be sure to read the full article for some additional insights on the film from Bryan Cranston and Michael Douglas. Kirk Douglas has written extensively about the Hollywood Blacklist in the past, most notably in his book "I Am Spartacus."