The use of archival footage was one of the most challenging and fun aspects of telling the story of TRUMBO. After consulting with director Jay Roach, I started a few weeks before shooting, breaking down the script and finding all the places where there might be a use or need for archival material and stock footage. There were quite a few and some of them were already included in John McNamara’s wonderful script. Next, my 1st assistant Andy Jurgensen and I began working with archive supervisor Deborah Ricketts. Ricketts sent us hours of material on the topics we needed and worked on figuring out what was clearable, what could be altered, etc. 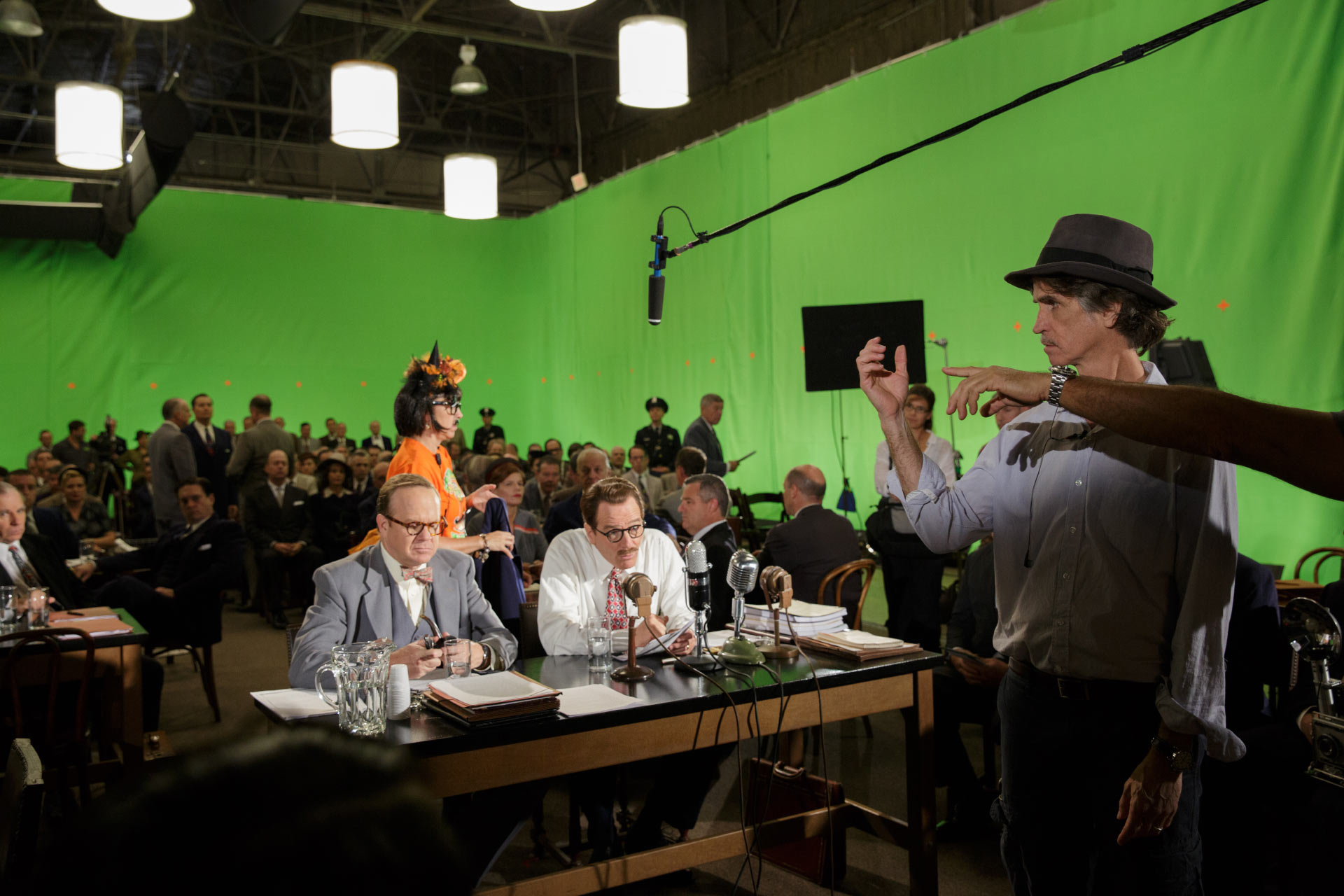 There were quite a few areas in the film where we needed historical material. Obviously the HUAC [House Un-American Activities Committee] hearings were a big part of the film. The challenge there was that we could not use footage that included the actual Hollywood Ten because we had our own actors playing those characters. The same was true for the committee chairman, J. Parnell Thomas [played by James DuMont], and the lead investigator, Robert Stripling [Johnny Sneed]. So first we all reviewed that material to get a sense of the time and place. Next I gathered materials that included photographers, reporters, and spectators at the hearings, footage that I could cut in with our footage. There was also the work of finding the footage of stars, like Humphrey Bogart and Lauren Bacall, who attended the hearings.

In addition to our production design Mark Ricker, costume designer Daniel Orlandi, and cinematographer Jim Denault, a lot of credit for getting these scenes to work goes to our visual effects supervisor Dave Johnson. He was there from the beginning and any point along the way when we needed him. He helped us blend all the footage and do the final compositing. At the HUAC hearing, we were filming on a set with green screen far in the background. To finish off the scene, we had to extend the audience and put in the back walls, sidewalls, and windows to make the room complete. The art department, production design, and cinematography made the set look great, but we were still “missing” parts of the frame. Dave had a still photographer go to Washington, D.C., to shoot the missing wall in the actual congressional room, which thankfully hadn’t changed very much over the years. He then composited the walls into the background, making them believable, as if it were the original Congressional Hearing room.

We created a number of newsreels for the film. We did not want to use existing newsreels intact, because the existing ones had tied-in music and voice over, some of which was good and appropriate for us, and some of which was a little too much or not quite right. So we created our own. We looked at actual newsreels for reference, and then pulled accessible archival material to reconstruct them to say exactly what we needed. Our music editor, Tom Drescher, found library music that was similar in fanfare or style to what the newsreels had used. He then edited this music to ‘score’ our original newsreels and we licensed this music for use in the film. With Jay’s help, we also wrote our own narration and voice over for the newsreels. We cast actors from our loop group, The Looping Division, to be the newsreel announcers, as well as TV commentators when we created TV programs. Editorially the challenge was getting the newsreels to be concise and representative of what we wanted them to say, but also have the feel of a real newsreel, including the graphics. Technically we degraded our material to match the archival material. The archival footage had a beat-up degraded look since it was shot on old stock and had weathered over time, so we had fun matching that look.

One of the first newsreels we created was modeled after Hedda Hopper’s Hollywood, a short film in which she would emerge out of a graphic of her newspaper column and start talking about whatever topic she wanted to cover at that time. In our case, she was talking about the spread of communism and the threat right here at home. We used archival footage of Stalin as well as images of tanks, soldiers marching down the street, and planes flying overhead––a classic hawkish take on what the threat might be. Then we added footage we shot of our politicians, like J. Parnell Thomas saying, “the danger is at home and the traitors are among us.” We blended historical footage with our footage through that entire newsreel. We see Trumbo (Bryan Cranston) and Edward G. Robinson (Michael Stuhlbarg) at a strike we recreated. We used archival footage of picketing labor union workers in Hollywood during a carpenters’ strike, then we popped in tighter with the footage we created with Trumbo and Robinson at a more contained, smaller rally outside of the studio gate.

We also created stand-alone newsreels––one on the Korean war that didn’t make it in and one on Joseph McCarthy and the Rosenbergs. While these were not written into the original script, Jay had the idea they would open up the story and provide context to what was going on at the time. It also allowed us take a breather for some time passage that happens in the story. Since we had been using newsreels previously, it made sense to go to them in the abstract, that is in a way that they weren’t related to a scene or character. They helped give a time stamp and a historical frame of reference. 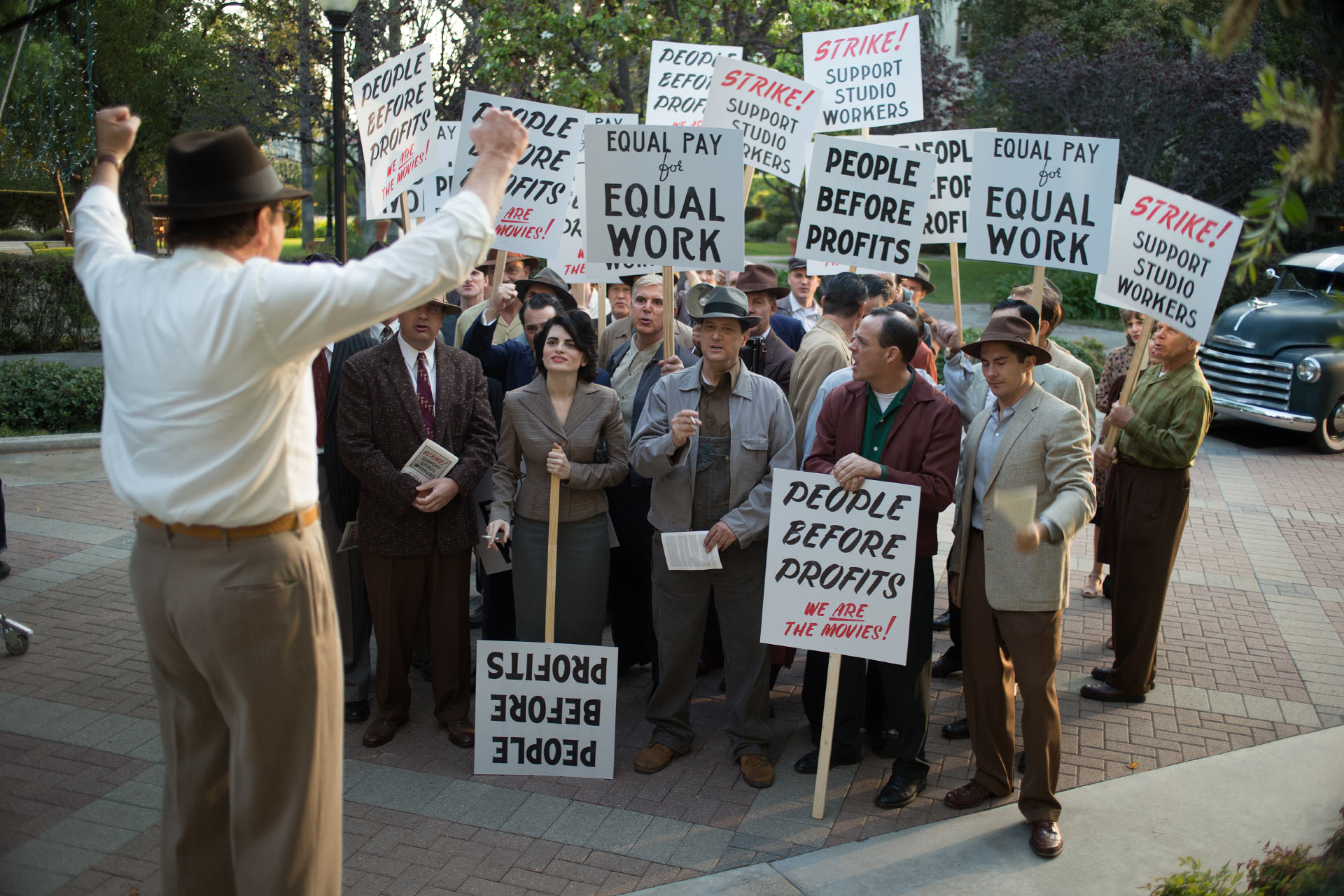 When Trumbo is in prison, we go to the newsreel that explains that the Rosenbergs have been sentenced to death and McCarthy is on the march. We created this from bits and pieces. The actual newsreel story about the Rosenbergs was a much bigger story, but we just extracted a few shots from it and wrote our own voice over. We didn’t want to stray too far into these historical stories before coming back to our characters. And as wonderful as that material is, it can break the spell of being in our story. 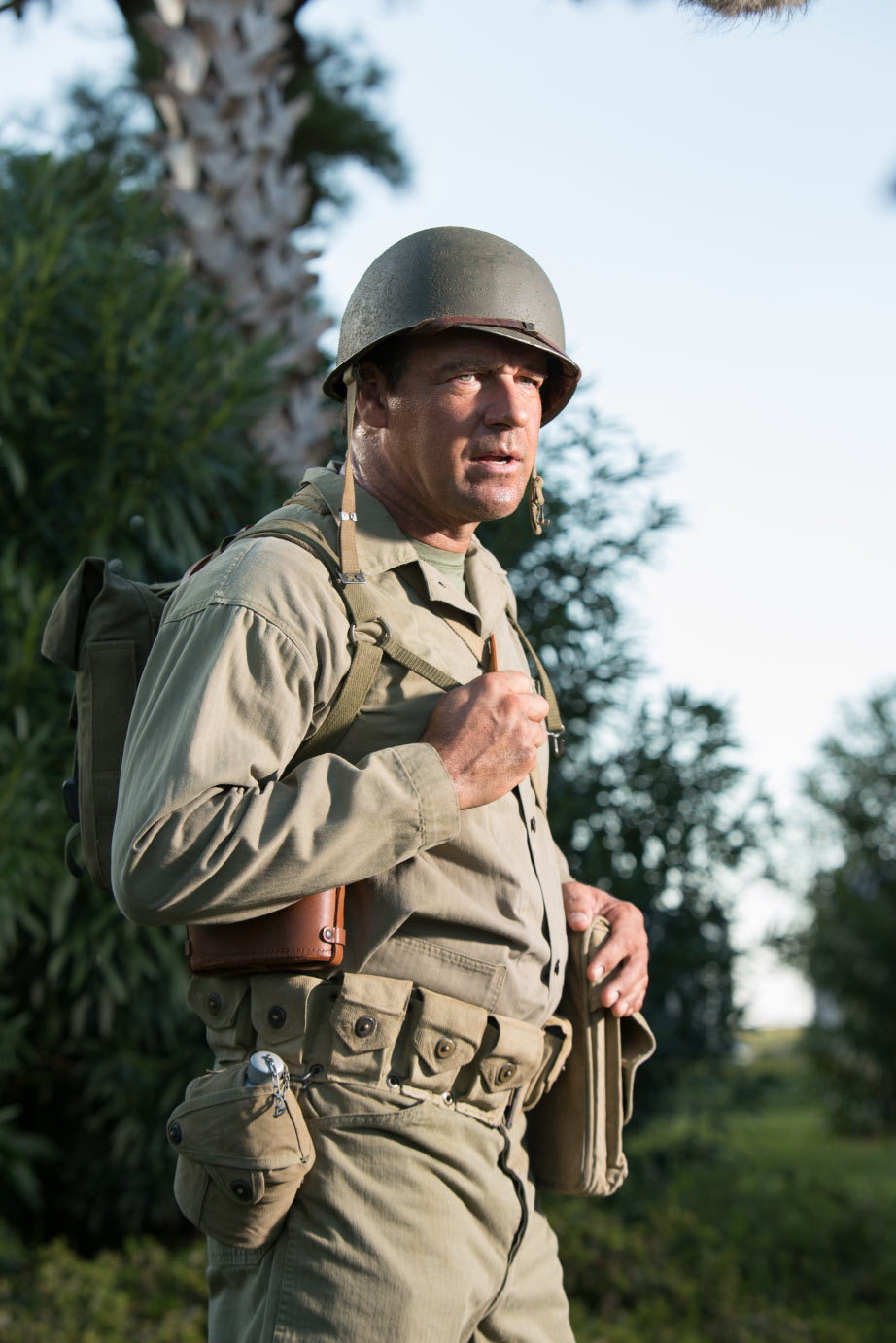 We created a John Wayne film called Gung Ho that Trumbo and the others watch in prison. Deborah Ricketts found four World War II films that were in the public domain that we could use for our film. We found a couple of wide shots which you might believe John Wayne was in. Then Jay worked with the actor David James Elliott (who played Wayne) to create some close up coverage to match what we had mocked up based on actual footage. They had the mock-up on set and used it pretty carefully so we could match shots.

In other places we licensed stock footage for TV playback. For example, the civil rights demonstrations that were playing on TV while Nikki Trumbo watched. The Academy Awards footage in which Roman Holiday won was licensed from the Academy, but we inserted our own Kirk Douglas [who actually presented the Oscar for Writing (Motion Picture Story)]. We found the clip and then Jay, Jim Denault and Dean O’Gorman (who played Douglas) created footage that matched the original.

At one point, a studio executive and others are watching the gladiator fight from Spartacus in a screening room. To create the scene they are watching, we had to shoot actor Dean O'Gorman again to match Kirk Douglas. We see Kirk Douglas in a wide shot from the actual Spartacus footage. Then we cut to a close up where he is against a wall, and it is our Kirk Douglas (Dean O'Gorman) intercut. That was a case of matching shot for shot. We made sure that we found a clip that had isolated close ups of Kirk Douglas so that we could cheat in a shot of O’Gorman. We wanted to be more realistic and linger on the shot in close up, so we didn’t use a lot of digital tricks. 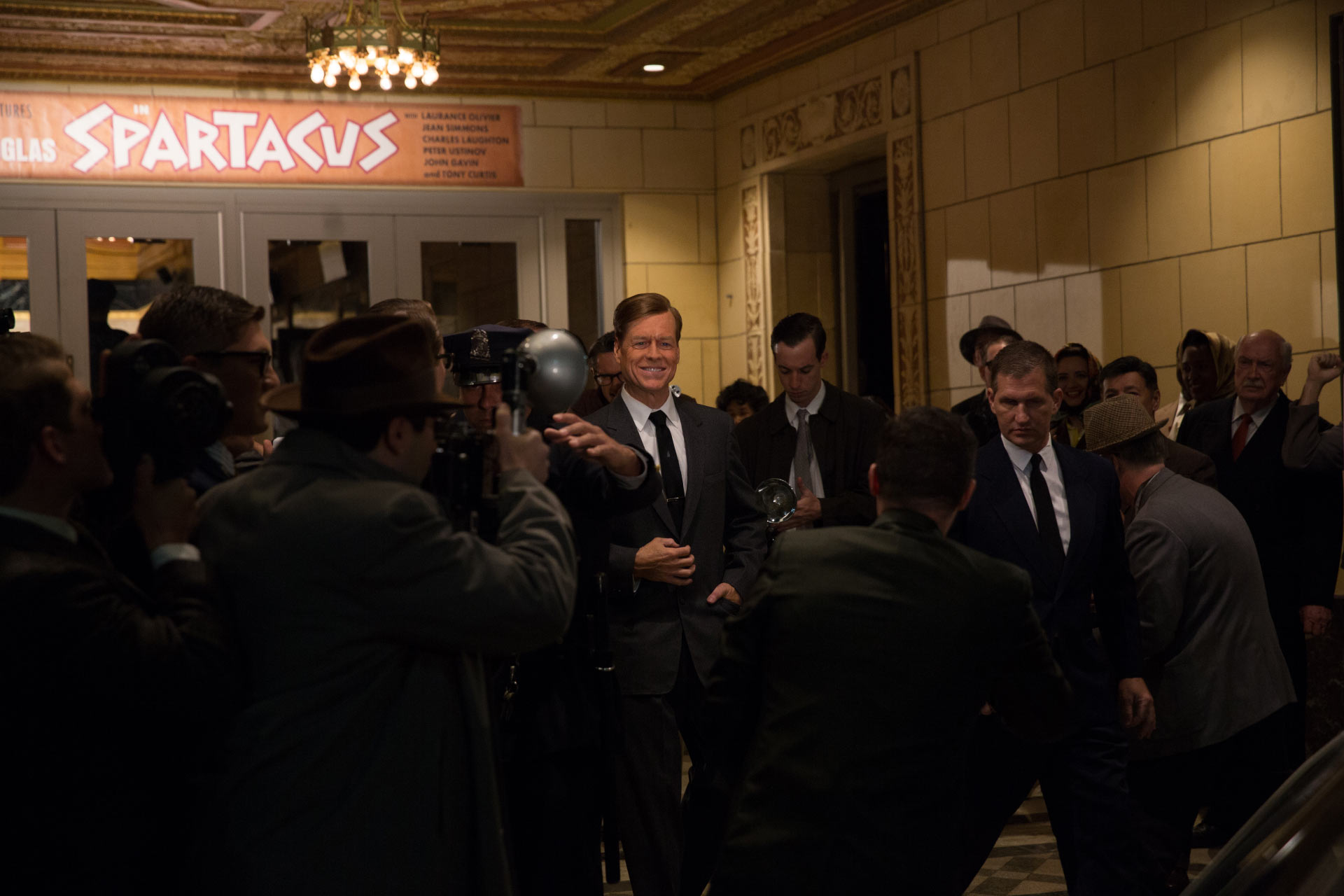 For the Spartacus premiere we mixed archival and shot footage. Inside, we filmed Trumbo (Cranston) and Douglas (O’Gorman), but for the exteriors we used archival footage showing the protestors. The scene of Kennedy leaving the theater after having seen Spartacus was completely shot by production. We had looked into using another screening for which we had footage. There was a special screening for foreign ambassadors, which were all being introduced in newsreel fashion. We mocked up a version in which we would have Kennedy leaving that premiere and getting into a car, but ultimately research showed that he wasn’t at that screening, so we followed the research and depicted him leaving the movie theater as it actually happened.