The many sides of themultitalented Louis C.K.

A Comedian With a Conscience

In Jay Roach’s TRUMBO, Louis C.K. plays Arlen Hird, a composite character who reflects the humor and humanity of many of Trumbo’s real-life fellow screenwriters. To play the character, the filmmakers turned to comedian, actor, writer, and director Louis C.K. “Even in the middle of a dramatic story, you need to find comedy once in a while,” says director Roach. “We cast Louis C.K. as a cynical, occasionally bitter, but often funny man who gets how screwed up what’s going on really is and who can articulate it in a way that will make you laugh. He finds the absurdity in the situation in a way that some dramatic actors might not.” C.K. was attracted to exploring this historical period; especially in the way it affected artists. “The opportunity to explore an almost unimaginable moment in American history was intriguing,” he says. “People lost their jobs because they went to a meeting. My character is just a writer who wants to work.” In addition to being able to convey the absurd humor of the situation, C.K. was the perfect choice to play Hird because in many ways his brand of comedy connects with the very principles those writers were fighting for. In a review of C.K.’s show LouieforThe Daily Beast, Andre Romano spotlights this point in his title: “Why Is Louis C.K. So Funny? He Uses Humor as a Moral Compass.” While many comedians find humor in exploring the uncomfortable truths of human existence, C.K. goes one step further. His comic ethos, which permeates his stand-up routines, filmmaking, acting, and even business dealings, finds humor in grappling with the messy but unavoidable question of how to do the next right thing, especially when it’s exactly what you prefer not to do. It’s the kind of question of conscience that Trumbo and his compatriots dealt with for more than a decade. 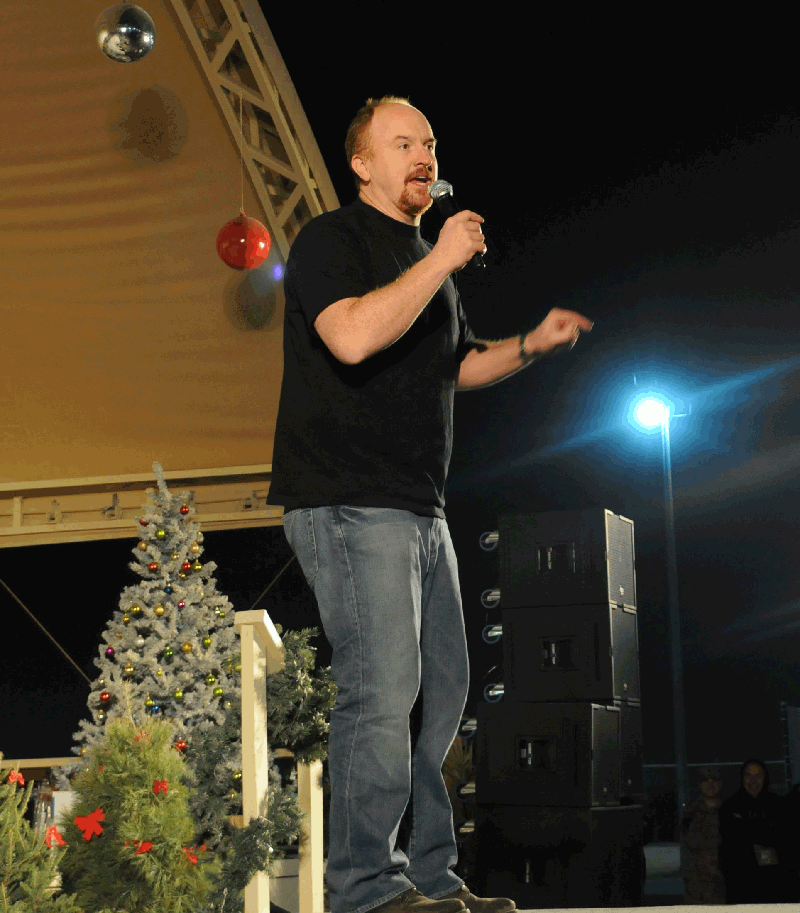 Few comedians have received as many accolades as Louis C.K. G.Q.proclaimed, “Louis C.K. Is America's Undisputed King of Comedy.” In Rolling Stone, his friend Chris Rock remarked, "Louis is the funniest man in America." Born Louis Szekely––he changed his Hungarian last name to C.K. so people could pronounce it––C.K. first stepped up on stage to tell jokes at age 17. Unfortunately with less than two minutes of material for a five-minute set, his 1985 debut proved such a bust that he avoided going near an open mic for nearly two years. But eventually he got back in the spotlight and started working with ferocious determination, showing up at all the comedy clubs in Boston, and then New York, that would have him. Within a few years, people started paying attention to his laid-back, sometimes surreal, brilliantly self-deprecating style. By the early 90s, he was nabbing guest gigs on comedy shows, and then in 1995, he landed the coveted appearance on Late Night with David Letterman. The next year, HBO gave him his first half-hour comedy special. From then on, C.K. moved from aspiring comic to headliner. In 2006, he taped his first comedy special Shameless with HBO, going on to do a special nearly each year. His 2011 album, Hilarious, won the Grammy Award for Best Comedy Album. Through various TV shows, stand-up performances, and comedy albums, C.K. developed an approach that embraced both fourth grade bathroom humor and such adult issues as race, sexuality, politics, and parenting. If previous comedians made their mark by tearing the Band-Aid off forbidden topics, or speaking of things too shocking not to be laughed at, C.K. found comedy in learning how to be a better person. In Esquire, Stephen Marche explains that, “Louis C.K. is the height of comedy as virtue. When you get past the shit jokes and the middle-aged self-degradation and listen closely to his message, it's about love and our duty to others. Somehow, miraculously, it's also funny as hell.” 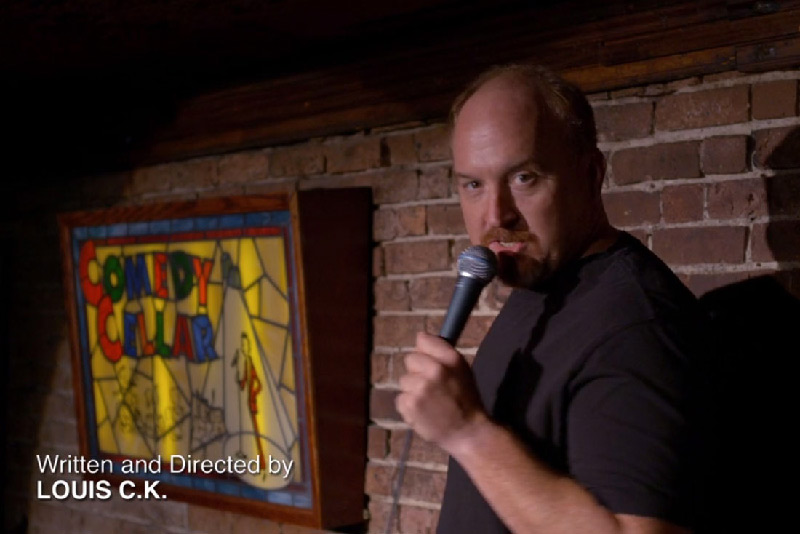 As a comedian, Louis C.K. is first a writer. Beyond penning jokes, screenplays, and TV episodes, C.K. has developed a style of writing that has gotten much attention and adulation, not to mention comparisons to lofty literary icons. In The New Yorker, Avi Steinberg bluntly asks, “Is Louis C.K. our Gogol?” In 1993, he became a professional writer when he was asking to join the writing team for Late Night with Conan O’Brien. Among like-minded anarchical spirits, C.K. got the chance try out a range of comical ideas. Through the ‘90s, C.K. wrote for a number of other shows including, Late Show With David Letterman, The Dan Carvey Show, and The Chris Rock Show. His partnership with Rock continued with the pair co-writing two films: Down to Earth (2001) and I Think I Love My Wife (2007). But undoubtedly his most imaginative work is the material he’s written for himself for his stand-up routines and his show Louie. For Louie, C.K. decided early on to author the whole show himself. By doing away with the writer’s room, C.K. found a way to make his show both personal and unpredictable. “When you write from your gut and let the stuff stay flawed and don't let anybody tell you to make it better, it can end up looking like nothing else,” C.K. explained to Pitchfork. And the results have not gone unnoticed. He’s been nominated for five––and won two––Emmys for Outstanding Writing for a Comedy Series. 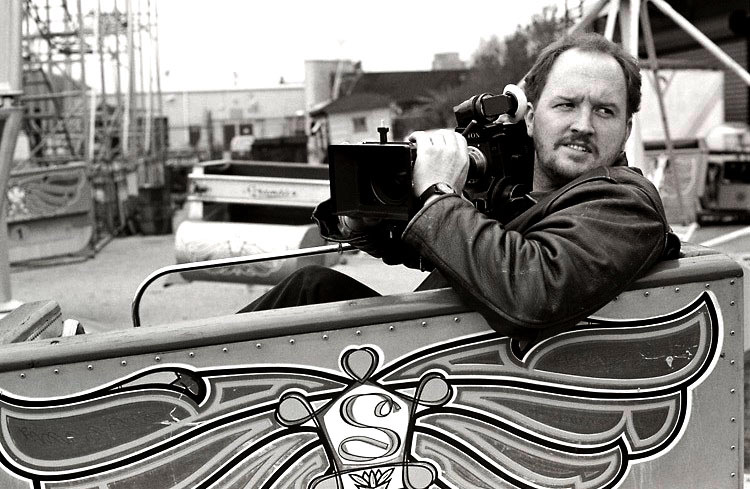 Directing: Find The Image To Match The Joke

At 17, the same age when Louis C.K. told his first joke before an open mic, he also picked up a camera and made his debut film. His short 16mm comedy, Trash Day, about thieves stealing garbage, kicked off his directing career. In 1990, he struck again with Caesar’s Salad, a short film that got into several film festivals. His third film, Ice Cream, an absurdist black-and-white drama about two people who meet in a convenience store, not only got invited to the 1994 Sundance Film Festival, but helped secure him a position as a writer on Late Night with Conan O’Brien.In 1997, he took his craft to the next level by writing and directing a feature film, Tomorrow Night, a surreal comedy about a camera store owner named Charles (Chuck Sklar) who, in addition to bullying his customers, makes an odd, poignant connection with an elderly customer named Florence (Martha Greenhouse). Shot in a flat black-and-white style reminiscent of early Jim Jarmusch with cameos by Steve Carell, Wanda Sykes, Conan O’Brien, and Amy Poehler, the film premiered at the Sundance Film Festival, although never got picked up for distribution. Recently C.K. re-issued it online, telling his fans, “Sometimes crazy. But it’s exactly the movie I wanted to make and I’m proud of it.” While C.K. went on to make one more feature, the 2001 comedy Pootie Tang, he found his real voice in directing his own television show. With Louie, C.K. weaves together an array of cinematic styles, from a Cassavetes-like realism to outright surrealism, to conjure up a cinematic world in which his humor can unfold. 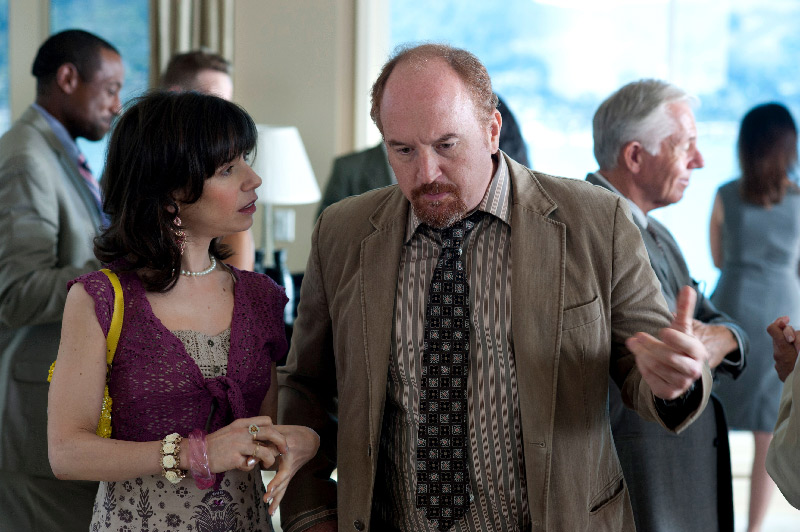 As a comedian, Louis C.K. is always acting––playing characters, putting on voices, acting out scenes. But in the mid-nineties, he started appearing as characters in other people’s work. In 1996, C.K. voiced a character called Louis in the animated series Dr. Katz, Professional Therapist, a show that cast many comics playing characters named after them. In 2002, for the animated sitcom Home Movies, C.K. provided the voice for Andrew Small, the father of the 8-year protagonist Brendon. In 2005, C.K. took a live-action role, playing a therapist in Hunter Richards’ 2005 drama London with Chris Evans, Jessica Biel and Jason Stratham. Although he rarely seeks out acting parts, C.K. shows up for friends or people he admires. In 2009, he appeared in Ricky Gervais and Matthew Robinson’s comedy The Invention of Lying. Later, Gervais showed up as a doctor in Louie. For Blue Jasmine, Woody Allen invited C.K. to try out for one part. Although that role ended up going to Andrew Dice Clay, C.K. received a note a few days later from the famous director offering him something different: “You were too sweet a guy to do the other one, but this is one you could do. If you don’t want to do this, we’ll do something, someday.” The same year C.K. appeared in David O. Russell’s American Hustle as Bradley Cooper’s comically abused boss. By far his greatest acting occurs in his own TV show, playing a character very much like himself. For his part in Louie, C.K. has been nominated five times for an Emmy for Outstanding Lead Actor in a Comedy Series, and has won the Critics’ Choice Television Award for Best Actor in a comedy series twice.

In his comedy, Louis C.K. often makes observations that, while hilarious, also seem so direct and obvious that one wonders why no one made that connection before. C.K. deployed that same level of common sense and directness to his business. By 2011, he decided to restructure the way he marketed his concerts by going directly to his fans. He wrote on his blog: “By selling the tickets exclusively on my site, I’ve cut the ticket charges way down and absorbed them into the ticket price.” He wanted to be sure that his fans were “paying just for a ticket. Not also paying an exorbitant fee for the privilege of buying a ticket.” He adopted a similar direct-to-fan approach with his specials, selling DVDs directly on his site, thus avoiding a distribution middleman. But even more significant was his marketing tone. When he put his “Live at the Beacon” comedy show up on his site for download, he made the process simple and transparent. Laying out precisely what the show cost to produce, he asked his fans to be equally honest and not pirate his work. “I can’t stop you from torrenting,” he wrote. “All I can do is politely ask you to pay your five little dollars, enjoy the video, and let other people find it in the same way.” With little marketing or advertising, the special, which people paid $5 to download, went on to make $1 million in just eight days.